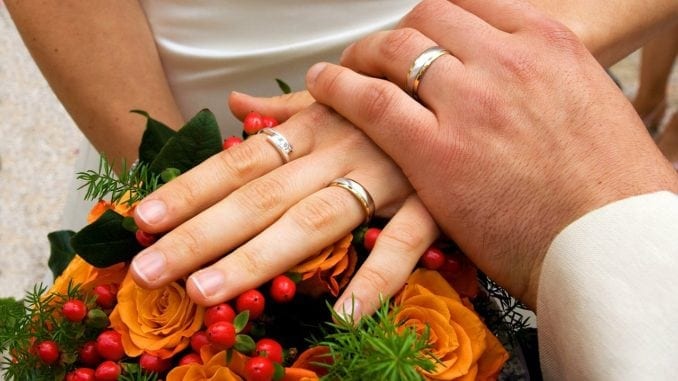 Are you in the market for a wedding ring? Trying to figure out what other men are buying their fiancés for that special day? If so, you wouldn’t be alone.

Each year, over two million couples get married in the United States, according to official data published by the government. When you take a step back, that’s a lot of people!

Which brings us to what this post is all about – men and their choice of wedding rings.

A recent study published in the journal Evolutionary Psychological Science suggests that guys are willing to buy more expensive, showy rings when they imagine themselves with an attractive woman and will spend less if she is “average looking”.

You read that correctly, a mate’s perceived beauty is apparently linked to how much people are willing to shell out on a ring. Guy Counseling spoke to Alan Tsang, a Chicago based premarital counselor for his reaction.

“In some ways, I am not surprised but in other ways, I’m stunned,” says Tsang. “Engagement rings are a big deal for a lot of guys. But the decision to buy should be based on affordability and not on how someone looks.”

Leading this study were Jaime Cloud and Madalyn Taylor of Western Oregon University. To conduct the experiment, they recruited 590 Americans with an average age of 30.

Participants were shown a picture of a person of the opposite sex and given brief biographical information. They were asked to imagine themselves as that person’s mate and then rate their level of attractiveness.

In this study, women had to pick the smallest ring they were willing to settle for offered by the target man. On the flipside, men had to choose the size of a ring they would purchase for their imaginary girlfriend.

Here’s what they found:

Men were willing to buy larger, more expensive engagement rings when they imagined themselves with a more attractive lady. And the kicker?

Looks also are important to women but, in when compared to men, they are more likely to select an expensive ring with a big stone when they are partnered with a less attractive man.

At any rate, the findings seem to back up previous studies that showed that men use symbols of financial success to attract desirable partners.

In case you are wondering, men – on average – spend around almost six thousand dollars on wedding rings, according to Credit Monkey.

So, what do you think? Would your decision to buy a wedding or engagement ring be influenced by your wife-to-be’s looks?

New study suggests potential financial troubles for millennials If your grandmother urged you to save for a rainy day, she did it for a reason. That’s because she likely knew the importance of putting away […]

10 Steps For Cheating Husbands To Heal Their Marriage

Table of Contents If you are a cheating husband, here’s how to forgive yourself and heal your marriageWhy Husbands CheatCheating Husbands and Self-Forgiveness1. Own Your CheatingOwning your cheating suggestions2. Avoid Graphic DetailsTips for talking about […]

Married Life Might Not Be the Key to Happiness

Trending News: Married Life and Happiness Alfred Lord Tennyson wrote – “It’s better to have loved and lost, than to never have loved at all.” Well, scientists decided to investigate the truth of those words […]