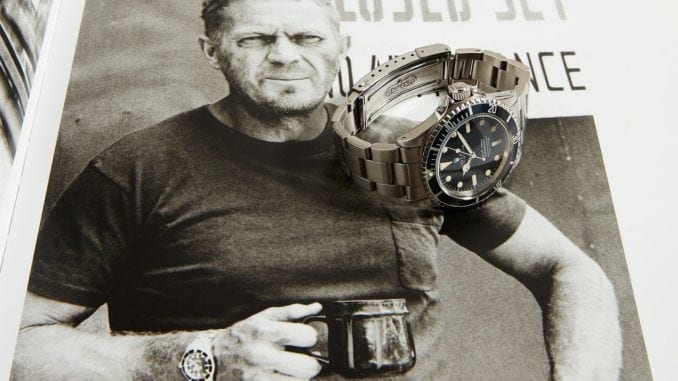 Auction for McQueen’s Rolex in December

Are you a fan of Steve McQueen? How about Rolex watches? If the answer is yes, you can have a little bit of both. But there is one catch. You need to have up to $600,000 to spare.

Yep, that’s right. According to a listing on the Phillip’s Auction website, you can buy a one of a kind Rolex Submariner watch worn by the iconic Steve McQueen this December.

Here’s the backstory. Back in 2016, a wildfire outside of Los Angeles, referred to as the Sand Fire (for California’s Sand Canyon), burned intensely for almost two weeks, destroying over 40,000 acres of land and killing two.

During that tragic event, eighteen buildings destroyed, one of them was the home of Loren Janes and his wife. Just so you know, Loren Janes was McQueen’s personal stuntman.

More: Would you spend 3 million on a Rolex?

When he was alive, McQueen gave the Rolex to Loren as a gift. Bear in mind, this was a watch that the actor wore and more than once.

Here is what is transcribed on the back of the timepiece: “TO LOREN, THE BEST DAMN STUNTMAN IN THE WORLD. STEVE”

For a lot of guys, Steve McQueen has long been thought of as the Hollywood’s “King of Cool.” In his twenty-six-year career in Hollywood, he worked his way to becoming one of the highest paid actors, starring in the largest grossing films of his era.

Many think of him as the quintessential rebel – the ultimate masculine loner and the essence of the American male.

With a tenacity and ferocity forged by a tumultuous childhood, each role was an opponent to be tackled head-on. On and off the screen, McQueen was characterized as a rebel, a loner, the epitome of the American male.

As Phillips points out, his coolness was never forced or faked. He just simply was cool. The guy flew airplanes, raced cars and motorcycles, even coming in second place to Mario Andretti’s Ferrari team at the 1970 12 Hours of Sebring in a Porsche 908/02.

“He needed a watch that could keep up with such a lifestyle, and he found one in the Rolex Submariner,” reports Phillips.

“A remarkable stuntman in his own right, [Loren} Janes performed as a stunt double and served as a stunt coordinator in other notable films and television series of the twentieth century until his retirement in 2002. Loren Janes sadly passed away in 2017 due to complications from Alzheimer’s disease.”

Will you be making a bid? Better hurry up before Nick Jonas snaps it up.

Do Men Buy Wedding Rings Based on How a Woman Looks?

Attractiveness influences wedding ring purchase decisions Are you in the market for a wedding ring? Trying to figure out what other men are buying their fiancés for that special day? If so, you wouldn’t be […]

Into non-round watches? One of the many things that separate the men from the boys is fine timepieces. They say you are what you eat, but what you wear beneath your sleeve tells much more: […]