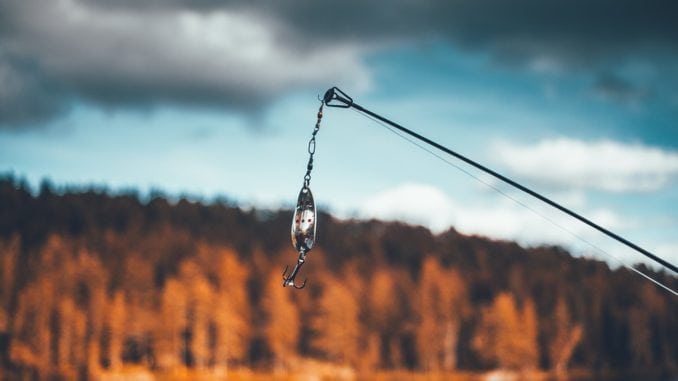 There are thousands upon thousands of bass lures currently on the market and new designs come out each year. With such a flood of options, the challenge becomes sorting out the gimmicks from the fish-catching essentials they all claim to be.

This point is particularly true when it comes to bass fishing hacks.

To help you stock your tackle box with only the best, this article introduces you to ten tried-and-true bass fishing lures that will catch fish in practically anybody of water in the country.

Every bass angler needs a go-to crankbait. And while the Original Rapala is still a highly effective lure, the innovative new Rapala Scatter Rap has a more life-like action in the water that’s been helping put bass in the boat for both professional and recreational anglers alike.

Featuring a new lip design, the Scatter Rap has a distinctly erratic action in the water, moving in broad, jerky sweeps from side to side. It looks just like a fleeing baitfish when worked along the bottom, igniting predatory responses in any nearby largemouths.

Tie on a Rapala Scatter Rap anytime you need to cover lots of water to find fish. There are several models available with different body styles and lip lengths to reach various depths. Try out a few in your favorite colors and don’t be surprised if your old crankbaits quickly fall out of favor. See Amazon for price.

Sometimes you need to go deeper than a standard crankbait will allow. But what if the fish are holding in depths even the deepest-diving crankbait can’t reach?

Normally, you’d have to switch to a heavier lure — like a weighted jig. But now, you can simply tie on the Strike King 10XD, one of the all-time deepest-diving crankbaits on the market.

Thanks to a huge lip, the Strike King 10XD reaches depths of up to 25 feet or more. And, it has an internal weight transfer system which makes it possible to cast the lure farther. What’s more, upon splashdown, the 10XD has a super steep dive angle so it wastes no time getting to the bottom where the fish are.

Keep in mind, however, that the Strike King 10XD is a very large crankbait — over six inches long — so use it only when you’re targeting the biggest bass. See Amazon’s price.

Overhead blade style spinner baits are very effective lures, producing lots of flash and water movement to draw bass in from far away. However, many spinnerbaits run big, bulky, and are very in-your-face. But what if you want the same attractive qualities of a spinnerbait but in a more subtle package?

More of a finesse lure, the Booyah Pond Magic — as its name implies — is designed for fishing smaller waters such as farm ponds where monstrous flashy baits aren’t needed. It has tandem blades that flutter and flash just enough to entice a strike. It’s able to cover the entire water column, so simply cast it out and let it sink to reach your desired depth.

Reel slowly and let the lure work its, well, magic. If all goes well, you’ll feel a solid “thump!” at the end of your line. See Amazon’s price.

Pitching and flipping heavy skirted jigs into thick cover is one of the best ways to target big bass that are hunkered down tight. While there are many jigs that will work for this application, the Terminator Weedless Football Jig is by far the best.

The Terminator has an improved football head design that is significantly more snag-resistant than other jig heads. The unique shape of the head helps keep the jig from getting wedged in between rocks or logs and features a recessed line tie-in point to further reduce snags.

To keep the lure even more weed-free while also increasing hook-set efficacy, the head is designed to keep the hook riding up at a 30-degree angle while resting on the bottom.

Flip the Terminator into a brush pile, let it settle to the bottom until your line goes slack, and keep a firm grip on that rod! You can buy these at many bait and tackle shops or check Amazon.

Sometimes, when finesse techniques won’t cut it, you need to go big, flashy, and loud. You need a chatterbait. While there are many innovative chatterbaits available, the Original Z-Man Chatterbait is something every angler should have in their tackle box.

Essentially a mix between a spinnerbait, a crankbait, and a jig, the Z-Man Original Chatterbait uses a hex-shaped blade to produce a substantial vibration you can feel through your rod grip. The fish feel the vibration too, using their lateral lines to locate the source of the frequencies.

For this reason, the Z-Man Chatterbait is one of the best lures when searching large swaths of open water to find fish — many times, the fish will come to you. Check Amazon’s current price.

As one of the all-time classics, few bass lures can compete with the pure deadliness of a soft plastic worm fished nice and slow. And among the seemingly endless bass worm options, the Gary Yamamoto Senko Worm is undoubtedly the best — even though it doesn’t look like much on the shelf.

What the Senko Worm lacks in style, it more than makes up for in performance. Made of a softer-than-usual plastic, as soon as the Senko worm hits the water it starts wriggling and vibrating without stopping. It’s also extremely slow-falling thanks to a high dose of salt in the plastic.

The Senko Worm is available in over 75 color options and several different lengths with the 5-inch being most popular. Rig it Texas style, cast it to some likely cover, and work it with a simple lift and drop retrieve. Take your time with the Senko Worm and be ready to set the hook at any moment. Amazon carries these.

The Zoom Brush Hog is like the double bacon cheeseburger of soft plastic bass lures. It’s what you want to throw when it’s time to feed a hefty bass a full-sized meal.

With tails, arms, and wings, the Zoom Brush Hog moves a ton of water and produces lots of movement when worked on a Carolina rig. As an extremely versatile bait, you can use a Brush Hog anytime you know you want to cast something juicy but aren’t sure what to use. Available at many sporting goods stores and online via Amazon.

If you fish bodies of water that are stocked with rainbow trout, you’ll want at least a couple of the Spro BBZ Swimbaits. These jumbo-sized hard-baits are designed to imitate stocker rainbows which happen to be a favorite food of largemouth bass.

The eight-inch body of the Spro BBZ is segmented and joined with pins, balanced to produce life-like swimming action when retrieved. The fins and tails are made of color-matched soft plastic for even better action. Available in three versions — floating, slow-sinking, and fast-sinking — the Spro BBZ lures were designed to be fished as a system, using the appropriate version to target different sections of the water column.

One of the most appealing aspects of the Spro BBZ is its price. While most large swimbaits run anywhere from $75 to over $300, the Spro BBZ comes in at around $45 at many sporting goods stores. So yes, it’s a lot to spend on a lure, but when you’re hauling in bass after bass, that price tag will the last thing on your mind.  Check around for pricing, including Amazon.

Watching a bucketmouth smash a topwater lure is intoxicating — especially when you’re “walking the dog.”

The “walk-the-dog” retrieve, in which the lure is “walked” across the surface of the water with a distinct side-to-side action, was developed with the release of the Heddon Zara Spook in 1939. Since then, the lure hasn’t changed much at all and remains the quintessential topwater plug that has inspired countless copy-cats.

Fishing the Zara Spook “walk-the-dog” style is best done in relatively open water when you want to draw the fish in from far away. The technique itself takes some practice and at first, your arms might ache, but once you get it down you won’t want to stop. Many bait and tackle shops carry this type of lure.  See Amazon for a great price.

Bass eat the heck out of frogs, treating patches of lily pads as their personal buffet lines. While there are many variations of frog lures available, one of the most well-designed is the Spro Bronzeye Frog 65, developed by professional bass angler Dean Rojas.

Rojas designed the body of the frog to take advantage of Gamakatsu’s highly praised EWG Double Frog Hook. The hook points ride up and rest flush against the soft plastic body of the frog making the lure virtually snag-free. The frog is also specifically weighted to land on its belly consistently. When a fish bites the frog, the soft plastic body squishes in and the double hook penetrates the fish’s lip.

The Spro Bronzeye Frog 65 was also designed with a slightly longer body than most, making the walk-the-dog retrieve easier. Plus, the Bronzeye is available in many different colors — not only green — to imitate bait fish in addition to frogs. If you’re looking for a versatile topwater lure to add to your collection, this is it. See Amazon for pricing.

Now Go Get Your Catch On

Bass fishing can be as simple or as complicated as you want to make it. And the best part is, there’s no right way to go about it. As long as you’re casting proven fish-catching lures in fishy-looking spots, you’re bound to hook into something good!

What would you do if you came face to face with a mountain lion? Mountain lions, cougars, catamounts, pumas—call them what you like—are North America’s largest felines and are found in every state west of […]

How to Choose a Fishing Rod: 5 Hacks for Picking Right Equipment

How to choose a fishing rod tips In the market for a new fishing rod? Trying to figure out the best type of rod to fit your needs? If so, you wouldn’t be alone. Even […]

10 Great Places to Hike in Colorado

Places to hike in Colorado You don’t have to travel far in Colorado to reach some of the most physically challenging and overwhelmingly beautiful hikes in North America. Whether you want to sneak away for […]