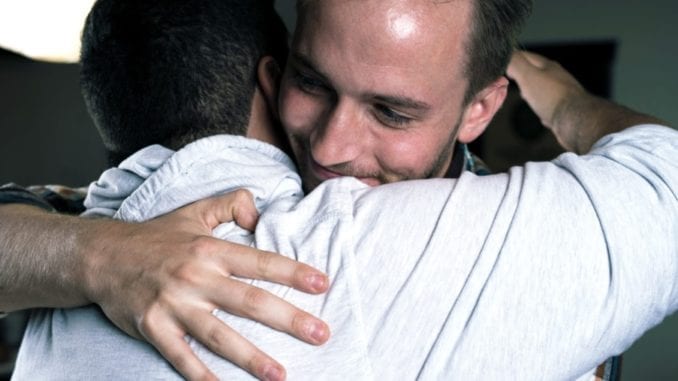 As men, our society teaches many of us to “cowboy up” and deal with emotions on our own. But a new group that encourages hugging and cuddling to heal past hurts may be changing all that.

Guy Counseling spoke to Dr. John Moore about this group. He works with men around traumatic issues – and as a matter of full disclosure, is also the editor of this site.

“Any group that encourages men to open up, communicate and heal from emotional pain is highly valuable. In my experience, men are desperate to have a safe place to share without fearing they will be judged.” Moore goes on to add, “The problem is we simply don’t have enough of these kinds of gatherings.”

That need appears to be real. In an interview with Philly.com, Scott Turner, co-founder of the group, shared the following: “So often, we’re taught that to be an emotional stoic is the mark of manhood. If you show any emotional weakness or vulnerability, that’s a failure to your title of a man.”

The group offers an affirming place to heal for straight and gay men alike. Before admittance, there is a screening process to keep out folks who may have less than honest intentions.

Holding and cuddling take place in several forms. For example, newcomers are introduced to the “motorcycle hold”. In this position, the hugger wraps his arms around the recipient’s torso from behind, like he’s driving a bike on the road.

Later, other forms of touching are introduced. Examples include the stroking of the limbs and even beards. There’s also a “puppy pile” where the men come together for a group hug and then gather on the floor to talk about what’s troubling them.

So, you may be wondering if guys who embrace one another experience psychological relief?

According to group member TJ McDonell, the answer appears to be yes.

He shared with Philly.com that he’s had lifelong problems connecting with people. He also revealed that the group has helped him to work through trauma related to being molested as a child.

“It allowed me to experience what good friendships are, what brothers are,” McDonnel said.  In describing his feelings after a group session, he said, “As a man among men, I feel …”

More than a few scientific investigations have been published that demonstrate the power of touch. A study appearing in Holistic Nursing revealed emotional and psychological relief of problematic mood states occurred through short periods of touch therapy.

Other studies have shown that acceptance and commitment therapy (ACT), which is a form of talk therapy [and appears to be an element of the group] also holds healing and restorative benefits.

Alex DeWoskin, a licensed social worker in Chicago who works with men told Guy Counseling the following after learning about the group: “I’d send some of my clients there in a minute. Honestly, I can’t tell you how desperate the need is for such gatherings – particularly for men dealing with trauma,” she said.

Would you join a group that encourages hugging, sharing, and holding? Please comment below in the discussion area.

A Man’s Guide to Choosing Leather Bracelets and Wristbands

Men’s Leather Bracelets Guide Are you looking around for men’s leather bracelets? Have you wondered about which one would look best on your wrist? If so, you’re not alone. In recent years, the leather bracelet […]

Are Men Really More Turned On During Winter?

Maybe winter isn’t all that bad?  Winter is one of those seasons people either love or hate. As a person living in Chicago, I can tell you that I’ve learned to like colder weather, mainly […]