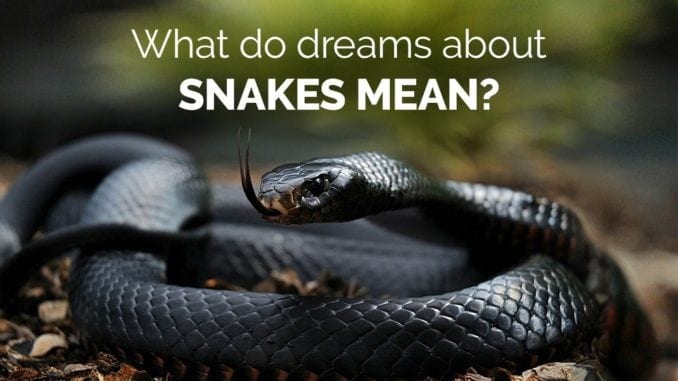 Are you having dreams about snakes? Did one bite you during a dream? Wondering why a serpent appeared in the first place?

If the answer is yes, you wouldn’t be alone. Dreams about snakes are a common experience. When one happens, it can be downright scary.

On that note, here’s a fun video from the movie, Indiana Jones where actor Harrison Ford voices his fear of snakes. Maybe you can relate?

Let’s explore what these dreams all about.

As a college professor teaching courses in psychology, I’m often asked about dream symbolism (Hall, 1953). Guys love taking about this topic. And the ladies? If it’s reptile related, not so much.

At any rate, here’s an example of a vivid dream one of my students shared in a personality theory class:

“I dreamed a green snake hissed at me while sitting in my parent’s backyard. Paralyzed with fear, I couldn’t move. That’s when it bit my face. I woke up in a cold sweat.”

Another example can be found in a young woman named Ellyn. In an essay, she revealed the following:

“I was relaxing in a warm bath. Everything was OK until I looked down at the sudsy water. That’s when I saw three black snakes slithering at the bottom. To this day, I still can’t take a bath. It freaked me out that bad.”

Perhaps you have experienced something similar? I’ll tell you what I share with students – here it goes:

Dream imagery can’t be taken literally. Instead, they should be viewed metaphorically and linked to your own life story.

And that’s what this page is all about; understanding how to interpret your snake dreams through symbolism.

On this page, you will learn:

What Snake Dreams Mean and Symbolize

To help better understand what your snake related dream might mean, I’ve scoured through hundreds of pages of literature and aggregated their common interpretations (Lakoff, 1993).

Subconscious anxiety: Snakes will often pop up during a dream during times of uncertainty. Typically, these fears manifest themselves in the form of a terrifying creature, like a snake.

Renewal: If you are working on reinventing yourself, snakes may show up in your dreams as a symbol of renewal. Some consider this to be a positive sign.

Rebirth and fertility: Snakes are known for shedding off their skin through a process known as sloughing. It is for this reason the ancients believed snake focused dreams are a sign of rebirth, transformation, and healing (Myths Encylopedia, 2017).

Sexual energy: A snake may appear in your dream to symbolize a repressed form of sexual energy. If you are unconsciously attracted to someone, a snake might pop up to present your sexual desire to connect with that person. See post on dreams about crushes decoded.

Creative Energy: The landscape of your brain includes a deep imaginative network. Scientists believe creativity is born from this place (Kaufman, 2013). When you are sleeping, your mind may conjure up snake imagery to represent your creative side.

Health fears and death: Because snakes evoke fear in many, some believe they are conjured up during dreams by a primitive part of the brain called the amygdala. If you are experiencing a health concern or hold fears of death, serpents may be part of your dreamscape. (See dreams about death).

Evil: Some people who believe in the supernatural believe that the appearance of snakes in dreams is a symbol of evil or dark energy.

Guardianship: If you have a dream about a snake or snakes in front of someone (or yourself) they could represent protective entities that are designed to guard against harm.

Vengefulness: People who hold unresolved anger about a life event, such as a breakup or being fired, may dream about snakes as a symbolic manifestation of vengefulness. An example might be a snake biting someone you are angry with.

What Do Snake Bite Dreams Mean?

If you have ever had a dream about a snake bit, you already know how scary they can be. This point is particularly true when you can see the snake’s fangs just prior to an attack.

There are lots of ways to interpret what snake bites mean in dreams. Common theories include:

Types of Snakes In Dreams

There are 3000 known species of snakes (Bradford, 2014). What follows is a quick breakdown of what different types of snakes could mean in your dream.

Snakes come in an assortment of colors with distinct markings. They often camouflage themselves into the local environment to protect themselves from predators. They also use this as a way of hiding in wait when hunting for food.

Here are several interpretations of what the color of a snake might mean in your dream.

Psychology of Snakes in Dreams

There are different psychological interpretations related to snakes in dreams. How they are viewed largely depends upon the individual’s theoretical construct.

Psychoanalysts, who rely heavily on childhood experiences as part of their work, may view a snake as symbolic of a childhood event or theme. Examples might include trauma, fear, unresolved grief or shame.

Questions a psychoanalyst might ask include: Did the snake look like someone? If so, who? As you think about this right now, what are you feeling?

Cognitive therapists, who almost exclusively are concerned with the here and now, may see the snake as an irrational representation of a fear based issue.

Questions a cognitive therapist might ask include: Does it seem logical that a snake would bite you while bathing? How does this fear relate to other worries you have during waking hours?

In the field of psychology, there is a construct known as psycho-spiritualism. That’s a $10.00 term used to describe the combination of psychology and spirituality.

I’m mentioning this because there are some folks who think snakes may hold spiritual meaning. The famous psychoanalyst Carl Jung often spoke about the active imagination as a conduit to the other dimensions (Schaverien, 2005).

Some Native American tribes believe that snakes are sent to us as spiritual guides. In this way, they act as teachers. An example might be a dream about a snake that is coiled up in a tree.

The general consensus is that the snake itself is leading you to a place of healing, using primal energy to signify its presence.

Spiritual guides, also known as spirt animals, are not chosen by us. Instead, they choose the individual for the purpose of imparting lessons. Throughout a person’s lifespan, they may be visited by many guides (spirit animals) who act as teachers.

Dr. Steven Farmer, a shamanic practitioner, minister, and licensed psychotherapist wrote an excellent book on how to identify spirit guides. Available on Amazon.

In the traditions of Judeo- Christian religion, the serpent has great meaning. In the Old Testament, a snake appeared in the Garden of Eden and caused all of mankind’s problems.

That’s because the serpent manipulated Adam and Eve into eating fruit from the forbidden Tree of Knowledge. In turn, they were transformed into mere mortal beings.

Some religious historians view the snake in the garden as a warning sign against lust. Others feel the snake is a conduit to wisdom. Depending upon which preacher you ask, some will even tell you the serpent was really the devil incarnate.

If you are Roman Catholic, you’ve likely seen statues and paintings of the Virgin Mary stepping on a snake. Here, the meaning is fairly clear – Mary transcends evil and is impervious to its powers.

While there is no hard and fast rule here, most people who subscribe to western religions will often link the snake to various forms of evil, including sexual temptation and shame.

It would be unfair to suggest that all Middle Eastern people are a monolithic group. That said, many who subscribe to Islam view snakes in a negative light.

Historically, they have been thought of as vial creatures who are symbolic of trouble or danger. Snake-bite dreams are thought to be precursors to real-life impending doom.

On the flipside, if you are triumphant over a snake, the dream itself may represent victory over a difficult situation. Personal empowerment is also part of the dynamic.

In the area of horoscopic astrology, snakes are not thought of as something negative. For example, the Chinese dedicate an entire year to the snake as part of their traditions.

Serpents are generally viewed as symbols of personal growth and transformation in Chinese culture. In some ways, this mirrors the viewpoint of water signs in western astrology, such as the signs like Scorpio and Cancer.

How Snakes Appear in Dreams

Dreams about snakes are unique to each person. That being said, there are certain themes that many people report. I’ve listed a few below.

The primary emotional response for each theme mentioned above is fear. Who wouldn’t be frightened by a slithering, fanged creature hissing nearby?

How To Interpret Your Snake Dreams

You will hear all sorts of advice about dream interpretation on the web. All I can tell you is that decoding a dream’s meaning is unique to each person.

My best advice is to look for themes and metaphors. Match them issues going on in your life – past, and present.

Additionally, keeping a dream journal may help you recall various aspects of your dreamscape. Jotting down small details can help provide context for what’s getting stirred up while sleeping.

Do Snake Dreams Foretell the Future?

Many people believe that dreaming about snakes is a sign of something that will happen in the future (usually bad). For example, some Sicilians feel that if a serpent bites someone you love in a dream, it means that person will die.

Ancient oracles also believed the appearance of snakes in dreams were really apparitions of evil energy, sent from hell to the mortal world.

That’s why it’s important to remember there is a cultural context to dream interpretation. Do you believe a snake represents bad luck?

Speaking only for myself, I believe that dreams are trying to tell us something. While I don’t think objects in dreams, like black snakes, are supernatural warning signs of things to come, I do feel their appearance holds meaning.

Fear, uncertainty, and doubt are common reasons why serpents tend to show up while sleeping. Sometimes, an incident from the past can trigger the active imagination as a way of processing trauma.

Because snakes evoke a primal response of flight or flight in the human mind, it makes sense that they also symbolize deeply held fears.

If you are looking for more insight into your dreams, including dreams about snakes, there are many resources to consider.

One of my favorites is the Complete Dictionary of Dreams by  Llewellyn (See Amazon). What’s great about this book is how it assigns meaning to tons of symbols.

Other places to consider include ancient fables, like Greek or Roman mythology.

Thanks for visiting Men’s Culture. Be sure to Like on Facebook so you don’t miss any updates.

Kaufman, B. (2013, August 19). The real neuroscience of creativity. Retrieved from Scientific American: https://blogs.scientificamerican.com/beautiful-minds/the-real-neuroscience-of-creativity/

Myths Encylopedia. (2017). Serpents and snakes. Retrieved from Myths Encyclopedia : Myths and legends of the world: http://www.mythencyclopedia.com/Sa-Sp/Serpents-and-Snakes.html

Dreams About Someone You Like or Crush On Decoded

Dreaming About Your Crush Are you dreaming about your crush? For reasons you do not understand, do you have vivid dreams about a guy or girl you have been crushing on. In some of your […]

What Do Dreams About Tigers Mean?

The meaning of tigers in dreams Did you dream about a tiger? If so, you might ponder what made such a beautiful, and possibly terrifying creature stroll into your night-time imaginings. All animals you encounter […]