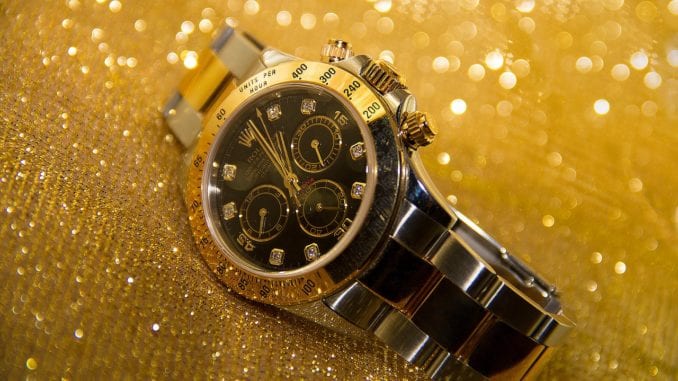 A Rolex Daytona is going on the market for a whopping 3 million dollars in May.

If you have an extra couple of million dollars to spare, you can pick up the affectionately named Rolex Daytona “Unicorn” to add to your accessories collection.

If I told you there was a watch going on the market that costs more than what most Americans earn in a lifetime, would you be interested?

Would your opinion be swayed if the brand of the timepiece carried the name of Rolex? What if it were made of white-gold and is the only known model made by the company? Does that peak your interest?

Well, all we can say is that it certainly peaked ours and not because we are in the market. Instead, it’s because the watch itself has a jaw-dropping $3 million price tag (estimated).

The men’s timepiece has been affectionately dubbed “The Unicorn”; something that signifies it’s not going to be cheap. Its real name is the Rolex Daytona [model 6265] and is thought to be the only one ever made by the iconic company.

Created in the 1970’s, 6265 has a bit of a history. According to service markings contained in the case back between 1971 and 2010, it appears the timepiece went back and forth between retailers and the company on several occasions.

Eventually, it came into possession of John Goldberger, a collector who is known for being discreet. Apparently, he has deep pockets, which one would certainly need to have to own such a piece. We did a little checking and he does have a public presence.

According to the folks at Phillips, the watch itself is heavier than the standard yellow-gold that adorns many Rolex products. This makes sense when one considers that white gold weighs more because it contains more metals. We’re talking about palladium, magnesium, and nickel (that last alloy is designed for strength).

At any rate, as the story goes, Goldberger said he would never part with the watch. But things have apparently changed. He’s auctioning the “The Unicorn” off through European based Phillips on May 12.

And the proceeds? Well, it turns out that whatever the watch fetches will be donated in its entirety to the Children Action Foundation; a Geneva-based organization dedicated to helping young people by creating awareness around teen suicide prevention. They also assist with offering psychological and emotional support for kids in tuff situations.

So, if you are looking to pick up a one of a kind Rolex, you now can have a unique opportunity. What’s that – you don’t have that three million sitting around? That’s okay, neither do we.

But we can’t help but wonder if Nick Jonas does? He seems to really like the Rolex brand – particularly gold.

Photo credits: The main photo is from Pixabay and is not the actual watch. Middle photo is the actual Rolex 6265.

Auction for McQueen’s Rolex in December Are you a fan of Steve McQueen? How about Rolex watches? If the answer is yes, you can have a little bit of both. But there is one catch. […]

Into non-round watches? One of the many things that separate the men from the boys is fine timepieces. They say you are what you eat, but what you wear beneath your sleeve tells much more: […]