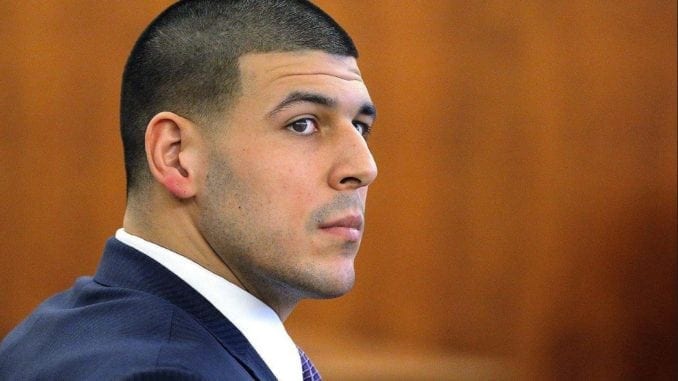 News Analysis: Some in the media need to do a better job of dispelling stereotypes

You probably have already heard about rumors that began last year: Aaron Hernandez was secretly gay and ended his life because he didn’t want people to know.

Now, a newly released book called Unnecessary Roughness is reigniting the flames of gossip. Written by Jose Baez, an attorney who represented Hernandez, new information appears to be coming to light.

Specifically, Baez says he told Hernandez that prosecutors were going to question his fiancée during the court trial.

As such, they intended to discuss Hernandez’ extramarital affairs, supposedly with one woman and one man, during her questioning.

Baez states this caused the former athlete to become upset and cry because the proceedings would out him as gay in front of his fiancée, per The Daily Mail.

“But Jose, she’ll be devastated. I never meant to hurt her. I know I keep disappointing her. But she is my soul,” Baez claims Hernandez told him.

This would not be the only attorney of Hernandez to suggest that he was gay. In March of this year, George Leontire, a lawyer for the former NFL player, said Hernandez was incredibly worried about his true sexual orientation coming out.

As reported in Sporting News, Leontire stated, ” This man clearly was gay. He acknowledged it. Acknowledged the immense pain that it caused him.”

And of course, there was the documentary that was released called Aaron Hernandez Uncovered, a two-part series available on the Oxygen Website. In it, more speculation occurred about his sexual orientation.

But at the end of the day, the real question is this: Does it really matter if Aaron Hernandez was gay? Just because someone happens to be born queer does not make them more likely to commit a crime, let alone murder.

In fact, according to an extensive page published by the American Psychological Association, being gay is just as healthy as being straight.

Let’s be real. During the early days of his pro-football career, much of the interest in Hernandez centered on his handsome looks.

In every way that matters, he channeled a bad boy vibe that was both mysterious and alluring. He also had a personal story of humble beginnings that would help fuel his meteoric rise to fame.

But in 2013, everything changed. The former tight end was arrested for the murder of Lloyd Odin. Immediately, the Patriots booted him. And in 2015, he was found guilty by a jury for that crime. It would only be later that the conviction would be vacated.

After Hernandez’s suicide in 2017, word began to spread about an alleged prison lover. As a result, deep interest into his personal took off.

Some in the media believed there was a rush to judgement about his sexual orientation. Others got caught up in the idea of a man living a double life.

Let’s assume that indeed, he was attracted to other men. Perhaps he liked girls and guys. Maybe it’s even true that he had a same-sex relationship behind bars.

Here’s the hard truth. Who he loved or may have slept with doesn’t make someone more likely to be a criminal. Being LGBTQ doesn’t hardwire anyone for homicidal behaviors; a fact that seems to be lost in some of the reporting.

News organizations and blogs need to do a better job of pointing this out. Not doing so only plays into harmful stereotypes about queer people being “messed up” or “sick”.

7 Goal Setting Mistakes That Hold You Back From Success

Do you make these goal setting mistakes? New Years resolutions. Sales targets. Weight loss. Goals surround us. Strap on a smart watch or pocket your phone, and goals will track you while you sleep, and […]

Coaching a kids team? Check these hacks out. Are you thinking about volunteering to coach your child’s sports team? Coaching kids’ recreational sports can be a fun and rewarding experience that brings you and your […]