What it’s like being a man raped in prison

In 2008, I was sent to prison on drug-related charges linked to the manufacturing and distribution of a controlled substance. I had just turned twenty-five and had no idea of what life was like behind bars.

I also happen to identify as straight. That really doesn’t have anything to do with it but I’m just sharing for background.

When I first arrived at the correctional facility located in the Southeast, I knew deep inside that things were going to be bad. There’s no way I can explain this except to say my inner voice kept telling me to be careful.

The first couple of days weren’t terrible but that was only because I was being sized up by other inmates. You see, one of the things you find out when you get sent away is that everyone knows your business, including who you are and why you are doing time.

At any rate, on the fifth day of my incarceration, I had two members of the Latin Kings (LKs) forcing me to have sex with them. While I can’t be sure, I’m guessing they were close to my age.

Now before I get too far into this, you need to know I wasn’t a scrawny guy. Before getting sent to the slammer, I used to work out at the gym and box. Plus, I had a part-time job as a furniture mover with a local company.

At any rate, the rape happened after I was assigned to the Maintenance Shop. When the correctional officers weren’t present, two of the LKs cornered me near the doorway.

It was obvious what they wanted because the jerks kept making comments about showing them my backside. When I told them no, one of them pulled out a piece of rebar and clobbered me across the face. 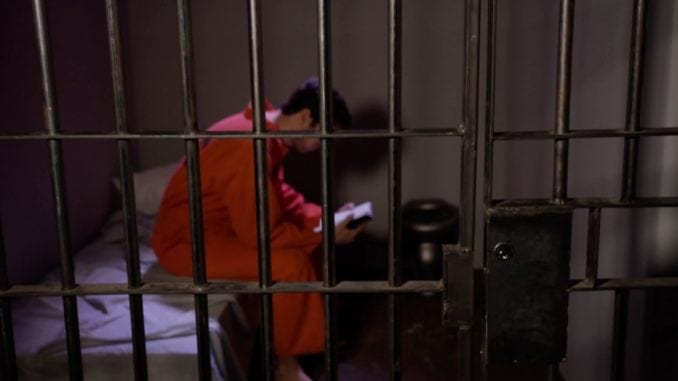 Everything after that is a blur. Sometime later, I woke up in a closet, which in prison is called “the cut”. That’s slang for being out of sight from the cameras.

So, here is the thing. The blood rushing from my temple didn’t bother me. That I could handle. But what did freak me out was the white stuff oozing from my behind and streaked across my face.

After wiping myself off with a sock, I got up and felt super dizzy. Once I finally made it to the main hallway, a guard spotted me and asked what happened.

I lied and told him that I’d slipped and bumped my head. Seconds later, I found myself in the prison’s infirmary, receiving emergency medical attention.

But I kept my mouth shut. Had I snitched on the two LK’s that had assaulted me, I wouldn’t be here to share my story with you now. That’s because, in prison, inmates who tattle don’t live very long.

And I wish I could tell you this was the only time I was raped but it wasn’t. You see after it happens one time, it will happen multiple times. It’s like word gets around, you know?

Cornered in the bathroom

The next incident happened around one month into my sentence. I’ll never forget it. I was on my way to a Christian Worship group when four LKs stopped me near the bathroom. I recognized two of them because they were the same bastards who had assaulted me before.

But the other two – they were new. Well, not “new” but certainly inmates I had never encountered. I’m guessing now but I’d lay odds they were in their middle to late thirties.

Sensing something was about to go down, I tried to get away. That’s when one of them pushed me into the bathroom. Then three of them stepped inside while one guy watched the door.

If you think I could have screamed, think again. One of the LK’s had a shank pushed up against my neck and told me straight out that if I made a sound, he would cut my throat and watch me bleed out.

I won’t go into graphic detail except to say that that the older of the group – and biggest – rustled me over to a sink. That’s when he grabbed me by my hair, bent me over and ruthlessly shoved his you know what up my behind.

I tried not to make sounds, but the pain was excruciating. Worried that I’d call attention what was happening, the thug yanked me up again by my hair and span me around. That’s when another one of the LK’s forced his junk in my mouth.

From there, it was a merry-go-round.  While one stood lookout, the other three ruthlessly did their thing.

It was like watching wild jackals at a feeding frenzy, giggling and laughing the whole time like it was no big deal. I can still see flashes of my face in that bathroom mirror as all of this happened.

Over the course of a six-month period, incidents like the one described above occurred several other times.

In fact, I got so sick of being raped that I decided to do something about it. Long story short, I decided to work with prosecutors on several drug-related cases and provide actionable information.

In return, I was moved to a minimum-security prison camp facility. Not to get into the weeds but prison camps offer much a different environment than penitentiaries.

Two years ago, I finally was released. To this day, I still have flashbacks of being raped by male gangs who thought nothing forcing themselves inside me.

I sincerely hope you never have to do time. If you do, your best bet is to try and go to a prison camp and not a penitentiary. Not that men aren’t raped at the camps because it can happen. But it didn’t happen to me there and it’s my understanding things like that are infrequent.

Today, I am working with a therapist to help sort out some of the flashbacks and terrible nightmares. Being violated like that eats at your sense of masculinity and makes you question yourself. It will probably take me years to worth through all of it.

And I can honestly tell you that since getting out, I’ve been completely clean. I don’t go anywhere near illegal substances and try to live a Christian life.

If you are wondering what it is really like doing hard time, there’s a book called the Federal Prison Handbook. I honestly wished I had read this before getting sent up the river.

It might have helped me avoid some of the problems I had or at least prepared me for the realities of prison life.

If you are a survivor of sexual assault, make sure you find someone for counseling. Even things like AA or NA can be helpful because a lot of the people there understand.

Does It Really Matter if Aaron Hernandez was Gay?

News Analysis: Some in the media need to do a better job of dispelling stereotypes You probably have already heard about rumors that began last year: Aaron Hernandez was secretly gay and ended his life […]