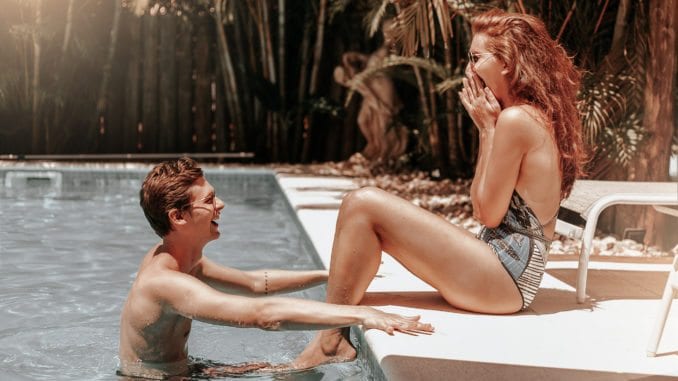 Why emotional intelligence will get you the girl.

You walk into a bar and spot a gorgeous looking girl standing with a friend. You look her in the eyes from afar, she notices it and looks at you. Your eyes meet for a second and then she smirks while turning her head sideways and goes with her hand through her hair.

“Okay, this is it”, you say to yourself and start walking towards her. You open a conversation and even her friend helps you a little bit. She excuses herself and leaves you two alone. You start talking and she tells you how all she wants is a nice, sweet guy who will buy her flowers, take her out on dinners and spend time walking down the beach. You hear this and immediately adjust your behavior towards these traits. The conversation is going really good and then you hear it.

“I have to go to the bathroom.”
And she never returns, leaving you there wondering what the hell just happened and what went wrong?

The answer lies not in the words she said aka what she wanted, but in the behavior she displayed aka what she needed. To explain this, we will go on a small journey called 7-38-55.

1970’s, Berkley California. Prof. Mehrabian was doing a study on why we like or dislike people when they communicate with us. And he came to a startling conclusion.

We deduce our feelings, attitudes, and beliefs about what someone says not by the actual words said, but by their body language and tonality. Prof. Mehrabian quantifies the study which later became known as a 7-38-55 study.

In the personal communication, words tend to account only for 7% of the effect, the tone of voice 38% and the body language for 55 %. And one more important notion here is congruency- when our words are not congruent with our paraverbal (tonality) and nonverbal (body language) signs, we tend to disregard the words said and believe in the tonality and body voice.

So when you meet someone and they are all slick with their words, but you have that gut feeling that something isn’t right, that is your emotional center telling you that their words are not congruent with their behavior and tonality. But since our emotional center isn’t capable of language, we are having a hard time explaining with words the feeling of “something just doesn’t seem right”.

When I first learned about this, it hit me like a brick wall. Because I learned that it isn’t about the words, it’s about the meaning behind the words. As Peter Drucker famously said, “The most important thing in communication is hearing what isn’t said.”

This rule has a scientific background in evolutionary biology and psychology because we evolved our emotional brain a million years before we learned how to talk. So we have been relying on figuring out the body language instead of words for a million years more. And that hard-wiring is still in force today.

But back to the dating world. What does this all mean?

Now, you understand that it isn’t about the words, but about the behavior (paraverbal and non-verbal communication). And we will now learn how to properly use this information to actually get the girl. We will do that through emotional intelligence.

Emotional intelligence – Give her what she needs, not what she wants

First of all, let us divide the needs from wants and why we have no idea what we actually want nor are we able to express it when we actually know the difference.

You go to a store to buy a drill and you tell that to a shop clerk. He goes on and on, rambling about all the different drills they have and how they have 700 different drill endings, how the drill fits smoothly in your hand and how it won’t break in the next 5 years – for sure!

Why didn’t you just tell the clerk that you need to put a family portrait on the wall? Because you didn’t know.

Yeah, I was mind blown as well and then I was sad because I spent 20 years thinking that what people said is what they actually meant and wanted.

The drill example is exactly what you need to have in mind when talking to other people. People don’t know how to separate wants from needs nor do they what they are. But if you pay attention to their body language and tonality, you will start to notice things.

Next time you are out there talking with a girl, watch what she actually does and how she responds to you.
Don’t take her words for granted because it’s not what she says, but how she says it.

All of these and much more happens in the subtle interactions happening underneath the words spoken. And if you want to get her, you need to train yourself in the art of emotional intelligence.

I will write a whole article on emotional intelligence in the dating world because it’s such a big topic, but in the meantime, some literature might go a long way.

The 3 books I would recommend you are:
1. The Game by Neil Strauss
2. Emotional Intelligence by Daniel Goleman
3. The Six Pillars of Self Esteem by Nathaniel Branden

Let me know in the comments what you learned from the books.

Is the Book “Return of the Gentleman” Worth Buying?

Review of Return of the Gentleman by Heer Believe it or not, a lot of guys like reading books that focus on self-improvement. The problem is finding quality material that speaks directly to men can […]