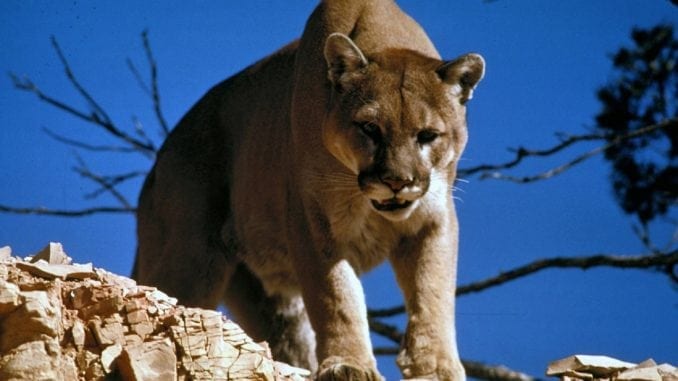 What would you do if you came face to face with a mountain lion?

Mountain lions, cougars, catamounts, pumas—call them what you like—are North America’s largest felines and are found in every state west of the Mississippi River with a few small populations in the eastern U.S.

These powerful cats are apex predators and make their living hunting deer, elk, and moose along with smaller prey like rabbits, grouse, and wild turkey. For the most part, they want nothing to do with humans.

But with the urban sprawl pressing further into natural areas, interactions between mountain lions and humans have become more frequent over the past several decades. Below, we show you what to do if you encounter a mountain lion.

Where Humans and Cougars Collide

Cougars—particularly young males—are extremely territorial and travel hundreds of miles to establish their own territories and find food. With a lack of suitable habitat, wide-roaming mountain lions often find their way into suburban areas where meals are easier to come by.

A 2016 study by the California Department of Fish and Wildlife revealed that 52 percent of mountain lions killed through state-funded depredation had eaten domestic animals like cats and dogs based on stomach content analysis.

If you live in cougar-country, it’s best to keep your pets—and their food—inside at night.

Mountain lions have no natural predators beyond other members of their own species so state management agencies must rely on hunting as a tool to keep populations in check.

But with increasingly stringent hunting regulations placed on cougars, it’s become easier and easier for these predators to expand their range into urban areas where they are largely unwelcome.

In fact, Wikipedia’s list of cougar attacks in North America shows that many of the attacks within the last half-century have taken place within close proximity to homes, roads, state parks, and even schools.

Looking at the 2018 Cougar Attack in Washington

Cougar-human interaction reached a tragic climax on May 19, 2018, when a pair of mountain bikers were attacked in the foothills of the Cascade mountains approximately 30 minutes outside Seattle, Washington.

One of the cyclists, Isaac Sederbaum, managed to escape the attack alive, suffering serious injuries to his skull and face from the cougar’s teeth. Sadly, his biking partner, S. J. Brooks, a Seattle chapter leader of the cycling organization, Friends on Bikes, was killed and partially eaten by the large cat.

What’s shocking about this attack is that, according to authorities, Brooks and Sederbaum did everything right when confronted by the cougar, it seemed.

They stopped riding as soon as they noticed the cat was following them. They made themselves big and shouted to appear more intimidating. They even fought back, one of them swinging their bike to strike the cougar.

Initially, their efforts were successful and the cougar backed off and went out of sight. But as the two were about to leave, the cougar re-appeared and immediately went for Sederbaum, at which point Brooks took off running to escape.

Releasing Sederbaum from its jaws, the cat’s chase drive kicked in and it took down the fleeing Brooks. Sederbaum, reports seeing the cougar dragging Brooks into the woods as he rode away to go for help.

Two miles down a logging road, Sederbaum found cell reception and called 9-1-1. He was taken to a local hospital for surgery and was released several days later. The Kings County police department responded to the call and brought in hounds to locate and euthanize the mountain lion, which was found up a tree roughly 25 yards away from the victim’s body.

Theories on Why the Cougar Attacked

The unfortunate outcome of the cougar attack in Washington boils down to something of a freak accident; experts say there was something clearly wrong with the cat.

The three-year-old male cougar weighed only 102 pounds, roughly 25 to 40 pounds below the average, so it could’ve attacked out of hunger.

The Washington Department of Fish & Wildlife conducted a full necropsy and enlisted a third-party lab to run a pathology test on the cougar to find out exactly what was wrong with the cat.

Suspect causes of such abnormal behavior included rabies, a brain abscess, or other problems with its internal organs, Rich Beausoleil, a bear and cougar specialist with the state, told the Seattle Times.

What to Do in a Cougar Encounter

Regardless of why the cougar attacked, the fact is, such attacks are extremely rare and aren’t much of a concern for the average outdoor-enthusiast. But that doesn’t mean you shouldn’t be prepared to act and react accordingly should you find yourself in a similar situation Sederbaum and Brooks faced.

Keep a can of bear spray clipped to your belt or attached to a chest harness. If you’re biking, invest in a can on high quality bear spray. This can be used as a close-range deterrent, most effective within 25 feet, so keep it within arms-reach at all times.

Make enough noise to avoid surprising a cougar. If your group is threatened, stand shoulder-to-shoulder to appear larger and more threatening. Don’t let children stray too far away from the group.

Cougars can see up to six times better than humans in low-light conditions and are most active around dusk and dawn when their natural prey is on their feet and moving.

All food, food scraps, and trash should stay sealed in an airtight container to avoid drawing in mountain lions that might be desperate for a meal. Whatever you do, don’t bring food inside your tent.

5. Stay Away from Dead Animals

Mountain lions kill a deer or elk every 9 to 12 days, eating what they can and stashing the rest for later. So if you turn up something dead, admire it from afar as a cat could be napping nearby.

As soon as you’re aware of a mountain lion, come to a complete stop and don’t make any sudden movements to avoid triggering the cat’s instinctive chase response.

7. Keep Your Eyes On the Cat at All Times

Don’t let the cat out of your sight until you know for sure it’s safe to leave the area.

8. Make Yourself Big and Intimidating

Your goal is to be perceived not as a prey item, but as a force to be reckoned with. Shout. Scream. Wave your arms. Throw rocks. Go crazy and don’t stop until you scare the mountain lion away.

If a cougar does come after you, fight to the death. Cougars have been successfully driven away by people fighting back, just as Sederbaum and Brooks did initially.

One of a cougar’s signature moves is to sweep the legs of its prey before delivering the killing bite to the neck. Do everything you can to stay upright and fight.

Over the past century, roughly 120 mountain lion attacks on humans have been reported across the United States and Canada, 25 of which were fatal. Compare this figure to the number of fatal bear attacks—46 since the year 2000 alone—and it’s clear that fatalities caused by cougars remain extremely rare.

Still, if you hike, bike, fish, or hunt anywhere mountain lions are present—from the deserts of the Southwest to the rainforests of the Pacific Northwest—there’s a chance you’ll come across one of these elusive creatures. But don’t let that stop you from getting outside and doing what you love.

Instead, take this opportunity to equip yourself with the knowledge and understanding necessary to steer clear of a cougar encounter altogether and act accordingly if one does come a little too close for comfort.

How To Use a Navigation Map and Compass In the Woods

Learn old school methods for using a traditional map and hand-held compass Handheld GPS devices and GPS-equipped smartphones are invaluable navigation tools for outdoor enthusiasts, however, they shouldn’t be relied on when your life is […]

Bear attack prevention Bears in the wild typically want nothing to do with humans. They’ll act aggressively if threatened, but as long as you give them plenty of space and make your presence known, most […]

Ourdoorsman Personality Revealed Are you a man that loves the outdoors? Have you always gravitated towards nature? Does the thought of being around wildlife and the natural elements spark your sense of adventure? If you […]