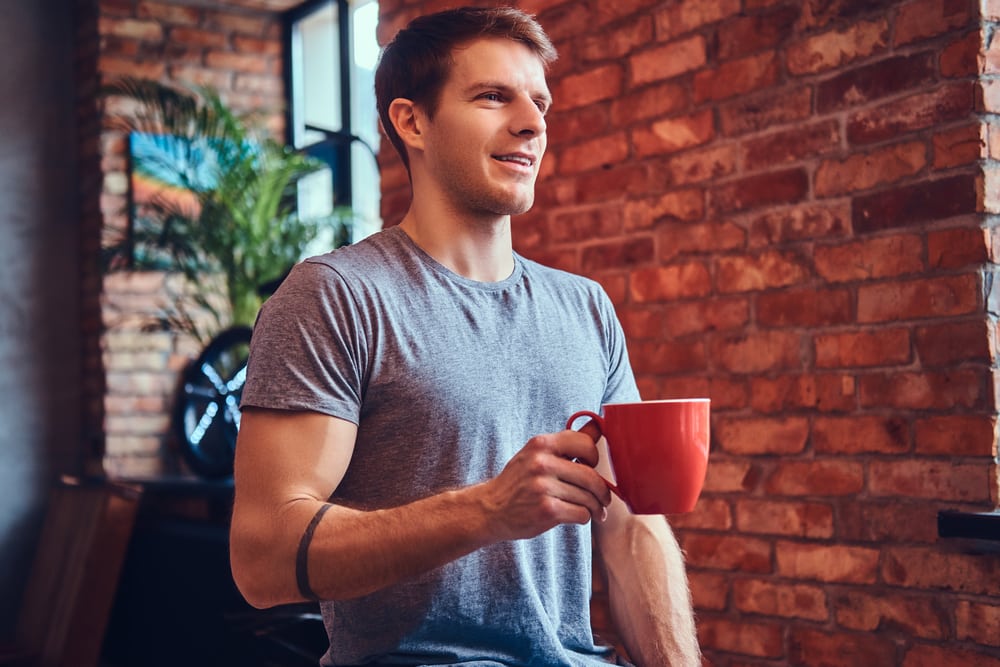 Coffee, men, and the bedroom

There is widespread belief that drinking coffee retards the sex drive and causes erectile dysfunction (ED). However, although the caffeine in coffee is a vasoconstrictor that can reduce blood flow, research conducted at the University of Texas suggests drinking two to three cups of coffee per day may help get men pumped up and ready to go.

Collecting data for the study, called “The Role of Caffeine Intake on Erectile Dysfunction in US Men,” was no small feat because 3,724 men took part.

All of the men recruited for the study were age 20 or older, with a mean age of 49. The physical health and body weight of the group members varied a lot, so the data obtained can be seen as that for the average male rather than men who were super fit or in poor health.

The study results suggest that men who consume 171mg to 303mg of caffeine each day are 39% less likely to fall victim to ED, and that the men who drank 85mg to 175mg of caffeine per day may decrease the likelihood of ED by 42%.

This led the researchers to conclude, “Caffeine intake reduced the odds of prevalent ED, especially an intake equivalent to approximately 2-3 cups of coffee per day.”

More: Pros and cons of caffeine for bodybuilders

Although it’s not good to overdo it with caffeine, the data clearly suggests drinking a few cups of coffee per day may be an excellent pick-me-up for men struggling with ED and those who hope to avoid having this issue in the future.

However, drinking coffee to alleviate ED may not work for all. Caffeine didn’t appear to make any difference to the group members with diabetes, but Dr. David Lopez, who headed the team, said this came as no surprise because diabetes is one of the “strongest risk factors” for ED.

What remains unclear is why caffeine may prevent ED, but Lopez and his team have speculated it may be because caffeine initiates pharmacological effects that cause the helicine arteries in the penis to relax, along with the muscle tissue that lines the cavernosal spaces.

The result of this would be an improved blood supply to the penis that would allow it to become engorged more easily and hard enough to have sex.

There is also a myth that drinking coffee increases the likelihood of ED because it interferes with blood glucose levels and places a strain on the adrenal gland that is sufficient to interfere with its ability to produce sex hormones.

However, experts at the Mayo Clinic state only men with diabetes are likely to experience such a reaction. Interestingly, drinking coffee is believed to help prevent diabetes, and researchers in China claim to have discovered the reason.

More: How to make cowboy coffee with ease

They have found some of the compounds in coffee prevent the accumulation of a protein linked to an increased risk of type 2 diabetes. Other studies suggest drinking four or more cups of coffee per day may lower the risk of diabetes by about 50%.

Coffee and ED: Some Hard Facts

There appears to be a lot of scaremongering about the relationship between coffee and ED. However, research shows drinking a moderate amount of coffee per day may help prevent the condition.

Unfortunately, the same research shows the caffeine in coffee is unlikely to offer any help to diabetic men who have ED, although research conducted elsewhere reveals drinking coffee may help stop men developing diabetes in the first place.

It suggests men who enjoy a few cups of coffee per day are also likely to enjoy better sex lives. So, as a pep-me-up, coffee could be hard to beat.

3 Warning Signs Of Diabetes In Men

Type II Diabetes and Men: A Closer Look While diabetes is a common and serious medical condition that does not discriminate—seeing as it impacts more than 34 million U.S. adults—it still carries varying statistics for […]

Can A Cup Of Coffee Really Help You Burn Fat?

Trending News: Study suggests coffee helps burn fat Do you drink coffee? Tired of reading stories about the perils of coffee drinking? Hoping to find something to help support your java habit? If the answer […]

How to Make Cowboy Coffee that Tastes Amazing in 7 Steps

Cowboy coffee step by step When you’re in the wilderness huddled over a hot-burning campfire in the cold of the morning there’s nothing more satisfying than a steaming mug of freshly brewed coffee. But before […]