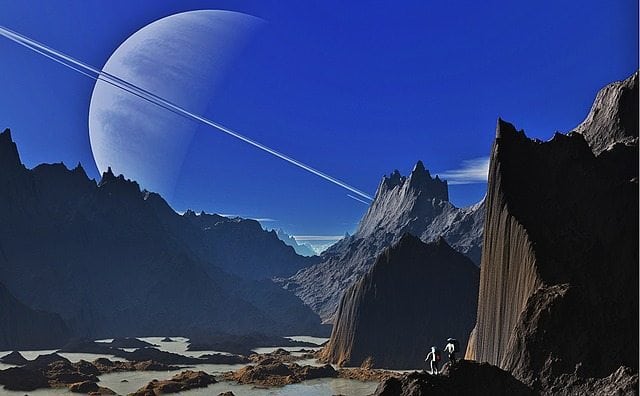 Saturn is the sixth planet from the sun and approximately 886 million miles from earth. In ancient alchemy, it was considered the first rung on the Ladder of the Planets. From the esoteric perspective, Saturn represents the starting on our journey from the stars.

When you look in the night sky, the ringed planet looks like a distant, grayish-yellow star. It’s most easily spotted during the twilight hours at the time when the sky takes on its distinct blue color. Generally speaking, the planet reaches its peak visibility high in the northern heavens during the dead cold of winter.

To give you an idea of the size of this monster, you could fit 764 earths into this gas giant!

Saturn also is one of the coldest planets (-288 below zero) and very slow moving. While the earth takes 1 solar calendar year to circle the sun, it takes Saturn almost 30! At this point in time, Saturn is the second largest planet in our known solar system. It’s possible Saturn could get displaced if Planet 9 is discovered over the next several years.

At the time of this post, we know it has 62 moons. They are considered the remnants of the planet’s greedy attempt to attract more mass with its powerful gravity. Its biggest moon is 50% larger than earth’s moon.

Had Saturn been able to attract more mass, some believe it could have transformed into a star. This could have potentially given our solar system two stars. But the cosmos simply didn’t design things to turn out that way.

The ancient Babylonians believed that this planet was a ghost of a dead sun and the oldest spirit in the sky. They considered this celestial body to hold “first matter” and symbolized energy’s most primitive state.

Therefore, Saturn, represented by metal and led in alchemy, symbolizes the principles of contraction, structure, stability and materialism.

In the traditions of horoscopic astrology, Saturn is represented by two signs of the zodiac. The first is Capricorn; the tenacious mountain goat that slowly moves towards its goals to reach new heights. The goat is grounded and stable.

The second zodiac sign linked to Saturn is Aquarius. Represented by the element of air, Saturn is the force that pushes mankind into a new age of thinking.

Because the planet is considered to hold transformational powers, Aquarius sun sign men and women are thought to be highly intelligent. See post on Aquarius traits to learn more.

The symbol for Saturn is Father Time. Using a distinctive hour glass and sickle, the planet personifies the forces of age, transformation and death. Sometimes, you will see Saturn with a peg leg to demonstrate his infirmity and incompleteness.

In mythology, Saturn was held prisoner by his father in a deep cave while still a child. Saturn conspired with his mother to overthrow the father and ended up using that sickle to castrate him.

Ultimately, he became king and ruled just as his father did – ruthlessly.

When a deadly dream was revealed to him through a prophet involving his children wanting to dethrone him, the mythological planet ate the kids as a preventative measure. One child was said to have been saved by Saturn’s mother – something Saturn would later vomit and become Jupiter.

Due to its transformational potential, this  was considered the most important planet to early alchemists. They considered it the beginning and the end of “The Great Work”. Many alchemists saw the planet as responsible for change and healing.

An early depiction of Saturn was the symbol Rx; something medieval alchemists wrote on paper and prescribed as a cure. Believe it or not, their patients would eat the paper with the sigil of Saturn, which the alchemists indicated was magical.

Today, the sigil of Saturn (Rx) is still written on almost all prescriptions by medical doctors. It’s also a universal symbol for the modern pharmacy.

About Dirk Wolf 18 Articles
Dirk is a certified spiritual counselor and shaman. He uses ancient lore to teach lessons about self-insight, personality, relationships and wellness. Aside from freelance writing, he enjoys spending time outdoors in nature.