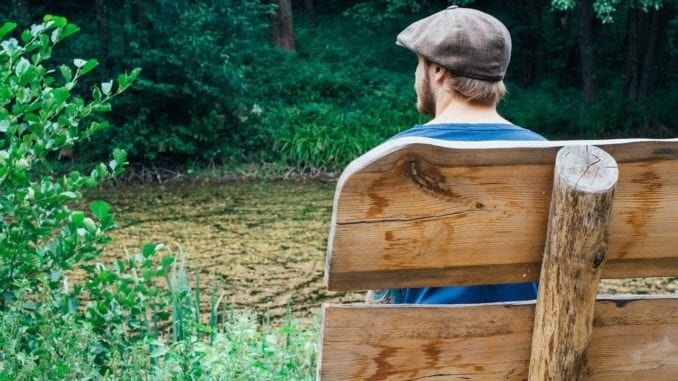 A new study published by the British Research Firm Mintel suggests that guys who are single aren’t feeling great about their relationship status.

According to their survey, 61 percent of single women revealed they were content on their own. Guys, however, weren’t as comfortable.

Per the survey, only 49 percent said they were content without a partner. Additionally, the study also revealed that men would much rather have a significant other over their female counterparts.

The Mintel findings also showed that 75 percent of women said they had not actively pursued finding a mate during the past year, compared to 65 percent of guys who said the same.

The study seems to support other lines of research that suggest men struggle with sharing their emotions and therefore don’t talk about their feelings with friends.

If you’ve ever experienced a rough breakup, you know how difficult the ordeal can be. And that’s sad news for guys because the tendency is to hold things in or pretend as if the loss doesn’t have an impact.

More: How guys REALLY break up!

According to a Senior Lifestyles Analyst at Mintel, Jack Duckett, Women are “typically better at creating support groups with whom they can discuss their thoughts and feelings, putting less pressure on the need for a relationship,” he told Moneyish.

Guys, on the other hand, experience a more difficult time opening up. In the absence of a partner to confide in, they could feel especially uncomfortable.

“[With] many men still largely finding it difficult to be open about their thoughts and feelings, the absence of a partner could mean that they have no one they can talk with about issues affecting them,” Duckett told Moneyish.

“With this in mind, it is perhaps unsurprising that unattached males struggle to enjoy their single status.”

Apparently, men and women are moving about the business of life in ways that are not conducive to building relationships.

“It is easy to assume that all singletons are actively looking for a partner; however, our data shows that this is far from always being the case,” Duckett wrote.

“Much of this reluctance to look for a partner can be attributed to the young increasingly prioritizing their education, careers and financial stability over being in relationships.”

How to Move on From a Relationship For Broken Hearts

Table of Contents Coping strategies when you want to move on from a relationshipMoving On From a Relationship Hurts1. Accept (and Embrace) That Hurting Is Part of Healing2. Lose Visual Reminders of Relationship3. Focus on […]

Single Men Are More Likely To Feel Lonely and Pressured

New research offers window into feelings of single men Are you a single man? Do you feel pressure from others to be in a relationship? Has the entire situation got you feeling lonely? Well, take […]