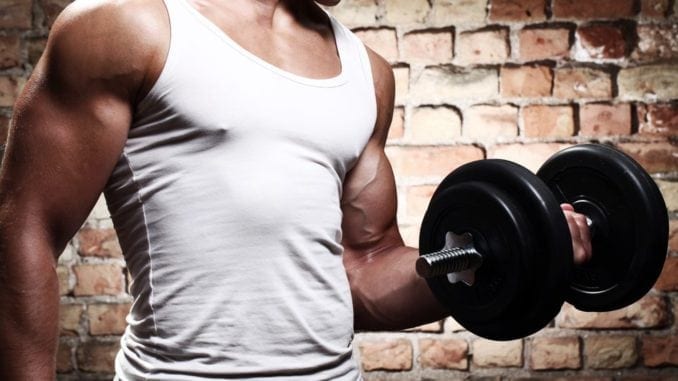 Guys, if you need a push to hit the gym more often, newly released research may be just the shot in the arm you need.

That’s because this study shows women much prefer guys who are built – meaning muscular.

The research, which has been published this past week in the Royal Society Journal Proceedings B, had 160 women rate faceless images of male physiques.

“We weren’t surprised that women found physically strong men attractive … what did surprise us was just how powerful the effect was,” said Aaron Sell to The Guardian, a senior lecturer at Griffith University, Queensland, Australia, and principal investigator of the study.

“Our data couldn’t find even a single woman that preferred weaker … male bodies.”

In this line of research, the investigators created a database shirtless male photos or tank-top wearing men. Their faces were obscured.

All of the guys were university students, but 60 were recruited from the gym while 130 were basic psychology students. All the guys were given tests with weights, used to assess muscular strength.

As part of the research, women and men were then asked to make a judgment on how strong they thought the men were, on a scale of 1 to 7 (based on the photos).

Notably, their guesses were very accurate, correlating in many cases with the strength tests. Moreover, the women’s ratings of the men’s attractiveness directly correlated to their muscular strength.

No one will be surprised by the idea that strong men are more attractive,” said Aaron Lukaszewski, an evolutionary psychologist at California State University at Fullerton and a study author. “It’s no secret that women like strong, muscular guys,” he shared with the Washington Post.

That said, the researchers were less interested in determining the obvious and more interested in learning about what empowered the responses.

“People are going to wonder why scientists needed to study it,” said Holly Dunsworth, an anthropologist at the University of Rhode Island and not involved in the study. “The answer would be because they want to know how these preferences evolved.”

The investigators suggest there are “ancestral cues,” an evolutionary relic of ancient human mating rituals. During the rise of early man, women would instinctually choose men who were stronger because they thought they would be better providers and protectors.

On some level, this makes sense – particularly where a family might be involved.

But regarding male attractiveness, a working theory exists that says that there’s a “sweet spot” for muscle. Many people feel if a guy is too built, it can be unattractive. This new study seems to suggest otherwise.

“The theory is that, yes, there would have been benefits ancestrally, in terms of the ability to acquire resources, protecting offspring, hunting and so on.

But at a certain point, mating with highly dominant men, they can exert all this aggressive coercive control and there might be costs,” Lukaszewski said, stressing that his study shows that women prefer muscular guys, regardless of the potential downsides.

Despite the findings, guys who are less muscular shouldn’t feel too disappointed.

As revealed in The Independent, several other lines of research have noted a number of factors that the ladies find more attractive. For example, previous studies revealed women gravitate towards men who are bald or short.

Should We Be Shocked Men Are Getting Muscle Implants?

Muscle implants and men – News Analysis  Did you hear the news? According to a recent report released by the American Society of Plastic Surgeons (ASPS), there has been a surge in the number of […]

Are Men Really More Turned On During Winter?

Maybe winter isn’t all that bad?  Winter is one of those seasons people either love or hate. As a person living in Chicago, I can tell you that I’ve learned to like colder weather, mainly […]