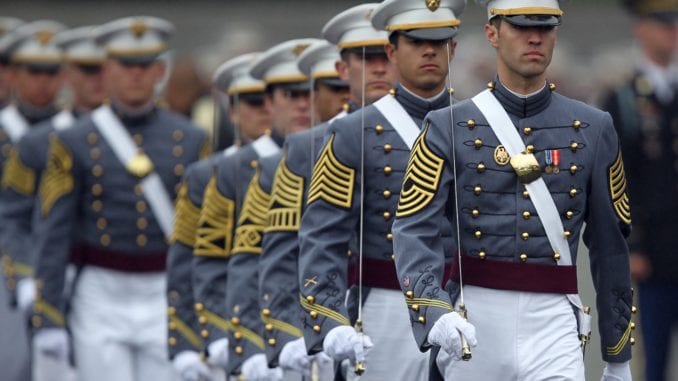 A troubling new report suggests that the number of sexual assault cases has doubled in the last year at the nation’s premier military academy, West Point.

Defense Department officials claim that the uptick is the result of ongoing efforts to get victims to come forward and tell their stories. But the significant increase may suggest more assaults are happening.

And it’s not just women who are being victimized.

While the large swath of cases involved females (12%) nearly 2% of men reported some kind of unwanted sexual contact. The biggest jump happened in the Army and Navy academies.

Historically, men have shown a reluctance to step forward and share their stories because they fear being perceived as weak or in some way unmanly.

Guy Counseling spoke to Merle Yoast, a licensed psychotherapist in California who has worked with men that have been raped or sexually harassed by other men for more insight.

“There are many reasons that men are sexually assaulted. In war, it is all too common but rarely acknowledged. The sexual assault of a man is primarily about emasculation. The reason men are raped is to make them less of a man or to end their masculinity so that they are no longer perceived as a threat by the rapist,” said Yoast.

Military leaders have suggested the increase in reported cases at West Point is a good thing because it demonstrates cadets are showing trust in the system and accessing treatment programs.

But Yoast has concerns because many of the programs made available to victims of sexual assault are geared towards women.

“Most services for sexual assault victims are for women. Only in the last few years have rape crisis centers begun to deal with male victims,” said Yoast.

In 2016, the Defense Department released a plan to prevent and respond to sexual assault of military men. Inside, the document acknowledges that the research support services available to male sexual assault victims “lag behind” those available to female victims.

Additionally, the report also acknowledges that men are less likely to step forward with their stories because they face “disbelief, blame, and scorn if they choose to report.”

Meredith Alling, Development and Communications Director with the non-profit group 1in6 said the following to Guy Counseling.

“Lack of access to resources can also be a barrier to seeking help. The emotional impact of delaying recovery can systemically ripple out to every area of a survivor’s life—and the lives of those in his community.

The new report indicates this is the fourth year in a row that sexual assault cases have increased at West Point.

Navy May Be Changing Its Working Uniform for Sailors

Upper brass considering 2-piece khaki Are you in the Navy? Well, there could be some big changes on the horizon for what you wear to work. According to a series of reports, including The Military […]

Men with PTSD – A Closer Look Are you a man with PTSD? Do you think you’ve suffered some type of trauma? Wondering what you can do about it? If the answer is yes, you […]