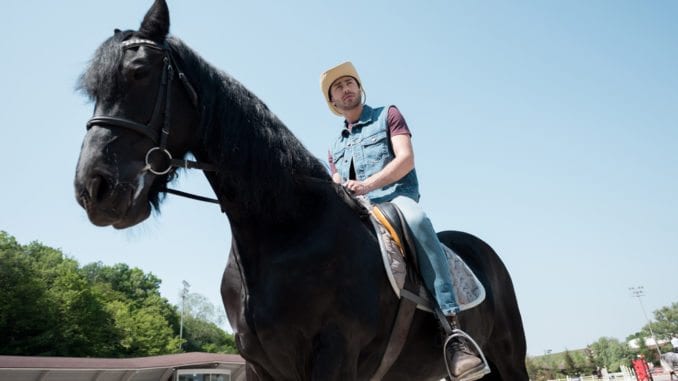 A new study released by the University of Missouri (MU) shows that military veterans who engage in therapeutic horseback riding (THR) may experience major relief from symptoms related to post-traumatic stress disorder (PTSD).

“I’m not surprised at all that veterans responded so well to this activity. For years, we knew that complimentary alternative approaches, combined with regular talk-therapy, can have a healing effect on people living with PTSD,” said Dr. Gregory Harms, a licensed Psychologist who helps veterans struggling with anxiety disorders.

In simple-speak, PTSD is a condition where an individual experiences flashbacks, usually accompanied by high anxiety, after being exposed to something life-threatening. PTSD can also occur when an individual witnesses something traumatic or experiences some form of injury.

For suffers of the disorder, it can be as if they are reliving the traumatic moment in the here and now. An example might be a combat soldier who was under enemy fire twenty-years ago and fearing for his life. Should this same person hear gunshots today, they may (momentarily) believe they are back in battle.

“PTSD is insidious because it distorts time and space, wreaking havoc on people who live with recurring sensations of the terrifying event,” said Harms.

For this line of research, investigators at MU recruited 29 participants from a local VA hospital to take part in the six-week study. To qualify, the person needed to have a diagnosis of PTSD or PTSD with traumatic brain injury.

They were then asked to take part in THR once a week over a six-week period. Using a self-reporting tool containing 20-questions to assess the severity of PTSD symptoms, researchers checked in with participants at two points in time: week three and week six.

Participants showed a 67% decline in PTSD symptom scores by the end of the third week. By study’s conclusion in week six, there was an 87% drop in scores.

The study has been published in Military Medical Research.

In the past, other lines of research have demonstrated THR has had a positive effect on people suffering from PTSD, helping individuals boost confidence and self-esteem while also upping social motivation.

What’s interesting about this study is that all of the participants were Vietnam Veterans, meaning they have been living with PTSD for the past four to five decades.

Harms, who looked at the study’s results, believes that therapeutic approaches like THR need to be incorporated into treatment plans for PTSD suffers where it makes sense.

“THR is just one of several approaches clinicians should consider when helping veterans with PTSD. This is particularly true for men who may be resistant to sharing feelings as part of traditional talk-therapy,” said Harms.

According to the study, approximately twenty-three million veterans experience significant symptoms of PTSD each year. Most researchers believe that number is much higher because many who struggle with the condition are reluctant to step forward.

Trending News: Link found between wishing others happiness and improved mood A new paper appearing in the Journal of Happiness Studies suggests that wishing strangers happiness can make you happy and reduce anxiety. Guy Counseling […]

What It’s Like Exercising Your Abdominals In A Public Park

I decided to move through my fears and just do it Last week, I walked by a public park near my house and saw a group of people exercising. One guy was doing chin-ups. Another […]

5 Ways to Deal with Conflict at Home

How to minimize conflicts at home Conflicts will inevitably arise when personalities and moods clash at home. Unless you’ve been to prison recently or have a degree in psychology, you might not know how to […]