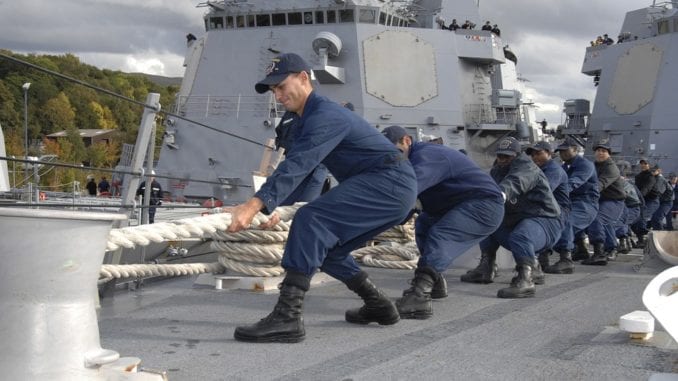 Are you in the Navy? Well, there could be some big changes on the horizon for what you wear to work. According to a series of reports, including The Military Times, Fleet Forces has announced they will be rolling out a blue edition of the improved Fire-Retardant Variant (FRV) coveralls.

Sailors will begin to see to see the uniform at their commands in the next several months.

The Navy has apparently been conducting focus groups in San Diego and Norfolk, surveying over 250 enlisted from diverse backgrounds to get their feedback, according to the director of Fleet Supply Operations and Services at U.S. Fleet Forces Command.

Guy Counseling spoke to Mark Jones, a retired sailor who served on the USS John F. Kennedy in the 1980’s and has a son currently stationed in Honolulu.

“It’s about time they get updated. I know they’ve tried to change things over the past few years but from what I hear there have been problems. Maybe this time they will get it right?” said Jones.

Indeed, there have been challenges. In 2012, a new blue and grey Navy Working Uniform (NWU) was being assessed by Fleet Forces Command. But that version of the NWU was quickly abandoned after internal testing showed it posed a danger to sailors because it quickly caught fire when exposed to heat.

After the embarrassing episode, top brass in 2013 ordered all NWU be fire retardant for sailors underway.

The 2012 incident led to the changes in uniforms that are happening now with an eye on safety and style. The new NWU’s are made of three different fibers that help the uniform last nine months as opposed to the current coverall that lasts six.

But not everyone thinks the proposed changes are a good thing. On social media posts, some have said the new uniforms are not a good idea.

Bart Denny, a retired U.S. Navy Officer, said the following: “Seems to me if the Navy would put the same effort into training and maintenance that it has put into redesigning uniforms the last twelve or thirteen years, we’d be a lot further ahead.”