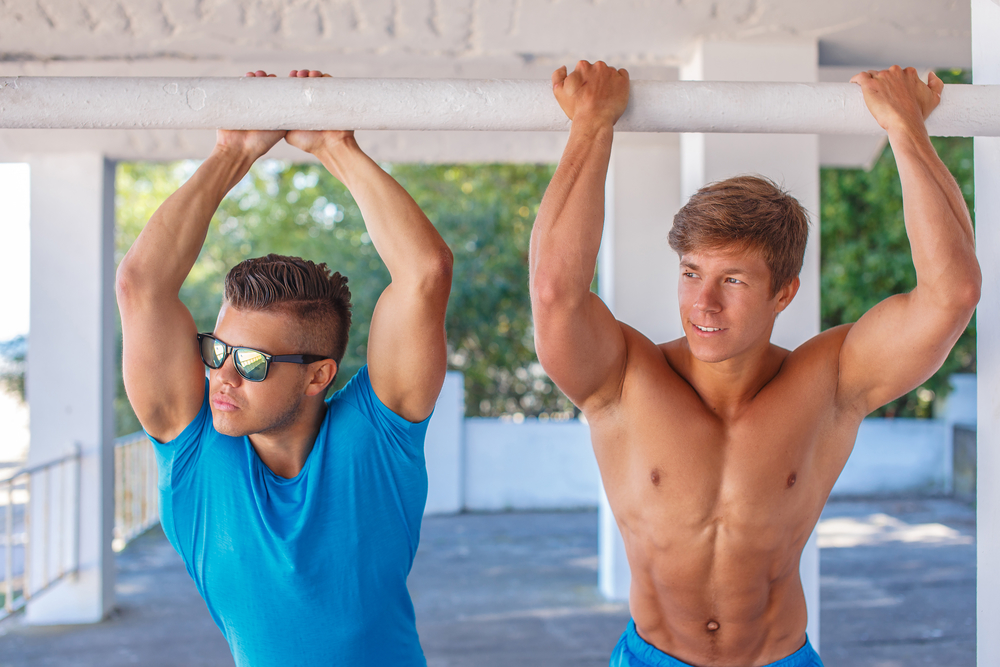 Do you have that one guy friend that just ‘gets you’? You guys click on so many levels and you can often finish each other’s sentences? Then, chances are you’re in a bromance.

Where women have BFFs, men have the bromance. It’s a term that was originated by skaters in the early 90s, but it’s evolved to become a mainstay in pop culture, as well. Movies like Wedding Crashers, Dumb and Dumber, and The Hangover feature some of the best comedic examples, but you can also call Barack Obama and Joe Biden’s connection a typical bromance.

They’ve stuck together through thick and thin like the dynamic duo.

Bromances are serious relationships though. Some people even think there are certain rules to a bromance. For example, you can’t verbalize your love for your bros (public or private).

There’s no badmouthing their spouses and you can’t hold grudges either. Those are just a few of the most common rules, but the guy code to a successful bromance can be extremely nuanced.

The bonds of a bromance rival our romantic relationships in terms of their emotional intensity and overall impact on our lives. Some men just prefer the emotional safe zone of a bromance to the virtual minefield of their lover’s sensitive psyche.

Your typical romantic affiliation comes with a certain amount of emotional baggage that bromances typically seem to avoid, almost as a general rule. So, one of the ways a bromance can be better than a romance is the utter lack of emotional connection. Has your bro ever turned to you and said – “Shut up, bro. Just drink your beer.”? That’s bromance code for – I already understand how you feel.

Then, there’s the flip side to that. There’s a small study that was published back in a 2017 issue of Men and Masculinities that people often site when talking about bromances.

The British researchers interviewed 30 straight males and found that those men communicate easier in platonic same-sex relationships. The author of the study Adam White noted that “the key differences we found is that romances are the sexual partner, and the bromance is the emotional partner.”

One of the most interesting details to come out of the study was that 29 of the 30 participants admitted to cuddling with their male bromance partner, but in a non-sexual way. That study was widely-publicized but had an extremely small crop of test subjects.

Although a bromance can provide men with a deeper emotional bond than their romantic relationships, it’s unlikely that same-sex men are cuddling on a regular basis.

Related: Do straight guys fall in love with other men?

The best explanation for that deeper bond is that a bromance often stems from a long-term acquaintance and a kinship that is based on mutual interests. In my case, my best guy friend is someone that I’ve been friends with since we were little kids. I feel like I’ve known him forever. That level of familiarity often trumps the novelty of my recent hook-up down at the local bar.

Occasionally, our romantic relationships can be founded purely on physical attraction and not emotional compatibility. In other words, your girlfriend might be smoking hot, but she doesn’t know the first thing about cars, or even respect the fact that you have a passion for cars.

That’s not the case with your best bro though. He knows you love cars and he’s willing to spend all afternoon in the hot sun with you trying to get the gear timing just right on your transmission…because he cares.

There’s a huge elephant in the room when it comes to men and mental health. A survey conducted by the Men’s Health Forum in 2016 found that most men would consider taking time off from work to seek medical help for a physical illness, but only 1 in 5 men would seek professional help for depression or anxiety.

Men need a psychological support system just as much as women, but unfortunately, we’re less likely to rely on professional therapy to work out our problems.

It’s little wonder that best friends double as our primary counselors on mental health issues. The bromance is also where we get advice for problems dealing with our sexual love partners. Although our best bros usually aren’t qualified to weigh in on these profound issues of psychological and social wellbeing, they’re primarily the ones who get tapped to function as sounding boards and therapists.

In some cases, men feel that seeking out the advice of a professional counselor means admitting that they have a weakness or a problem. Talking to a mental health expert frowns in the face of our traditional social concepts of masculinity.

Apparently, working out your feelings is what women do at the beauty parlor. Men play basketball and insult each other until someone eventually gets angry and all the raw emotions come pouring out in a brief, but important shoving match. Sound familiar?

You could cause them to feel jealous of your best friend due to the intimacy that you two share. Your bromance partner can also develop a certain level of envy for your spouse, girlfriend, partner, what have you. There is certainly a battle being waged over your emotional real estate.

An interesting study coming out of Oxford University determined that gaining one new lover pushes two close friends out of your inner circle. Robin Dunbar, the author of the study gave further insight by saying – “What I suspect is that your attention is so wholly focused on the romantic partner you don’t get to see the other folks you had a lot to do with before, and so some of those relationships start to deteriorate.” Therefore, you need to balance the time and attention you dedicate to your bromance buddy and your romantic partner. They might never want to occupy the same space at the same time, but your bro and your partner should have a mutual respect based on the fact that they both care about you.

Bromances are a vital part of male psycho-social regularity. That’s not to say that men in same-sex friendships just vent their feelings so freely. In fact, the prevalent avoidance of deep psychological issues is what often makes bromances so appealing.

Men often engage in impersonal activities with their bromance partner such as sports, video games or drinking just to let off some steam. Contrast this with romantic affiliations where female partners often push emotional interactions out of their male partners to resolve issues with the relationship. Most men hate these four little nasty words – “We need to talk.”

I think that phrase is probably banned from bromance lexicons.

Bromances can also provide men with the total vacuum of emotional and psychological activity – a place to mentally relax. Even conflicts between male best friends tend to reach quicker, less potent resolutions than romantic dust-ups between you and your partner. So, when is a bromance better than a romance? Whenever you need it to be.

8 Archetypes For Great Best Friends Friendship is a beautiful thing. Many of us have had a great group of friends or two in our lives. They have been there for us in the best […]