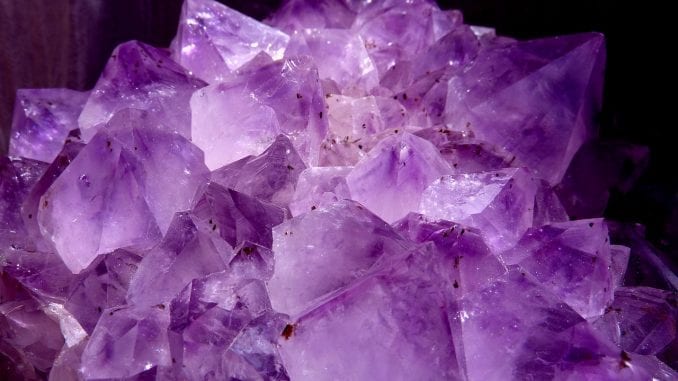 Have you ever looked at a chunk of amethyst crystal and thought you felt something? Have you been thinking about trying crystal healing or gem therapy? Well, you’re not alone because both semi-precious and precious gemstones are selling like hotcakes these days.

There was a time not long ago when crystal therapy was relegated to a pseudoscience. People just thought of it as hippie nonsense, but apparently the coronavirus has contributed to a change in the way people perceive the concept of healing. 2020 has been a year in which more people are looking for alternative forms of wellness.

Crystal healing, gem therapy – there are subtle differences in terminology, but the underlying premise is similar. Certain gemstones

What’s the Difference Between a Gem and a Crystal?

This is one of those questions that people don’t like to ask because they feel like they should know the answer, but it can be confusing. A crystal is a solid structure with microscopic materials arranged in precise geometric patterns. For example, a snowflake is a crystal and so is a diamond.

However, some crystals are not gems. A gemstone is an organic or inorganic substance that has crystalline form and can be cut and polished for various uses. Amethyst is a popular inorganic gemstone with a mineral composition. Amber is a petrified organic material that is commonly grouped in with gemstones.

Is Crystal and Gem Therapy Real? Here’s My Own Story

Recently, a friend messaged me with an odd proposal. She mentioned that there was a crystal convention in her town and that she was going to pick up some powerful new pieces. She was wondering if I’d be interested in buying some gemstones because she remembered that I was having trouble sleeping.

Now, I happen to really like crystals and gemstones, but purely from an aesthetic perspective. I like the colors and the harmony of their arrangement. My appreciation doesn’t extend into the realm of metaphysics or spirituality.

However, my friend is a yoga instructor who regularly practices transcendental meditation and other forms of complementary and alternative medicine (CAM). In case you were wondering, CAM is an umbrella term for yoga, meditation, chi gung, sonic healing, and other forms of therapy that don’t have official recognition in the medical lexicon.

My friend is a CAM guru and she can get way out-of-this-world with some of her beliefs and ideas. She showed me a photo of a large piece of amethyst. It was a beautiful, purple crystal gemstone. According to her, the gemstone in her photo had several healing properties such as enhancing immune system, regulating the endocrine system, reducing headaches, purifying auric fields, assisting with grief and sobriety, enhancing mental focus and helping you fall asleep.

I wondered – could a chunk of amethyst really do all that? Maybe you’ve questioned the same thing about gem therapy. Do gemstones really have the power to cure illnesses or improve your mood?

How Do Gemstones Improve Your Health and Wellbeing?

Gem healing is a form of energy medicine. Different gems vibrate at different frequencies. Their energy fields influence the energy fields of the body. I’m not talking about energy in the same way that physicists do.

Gems are claimed to have spiritual energy – the type of energy that is talked about in the same breath as auras and chakras. Practitioners of gem therapy might place certain gemstones on different locations of the body to influence the body’s natural energy fields.

What makes these objects special is that they have vibrational frequencies within their mineral composition. These vibrational frequencies are meant to interact with the energy fields of the human body to promote balance, remove blockage, and heal maladies from the inside out. Certain crystals are purported to draw out evil spirits like a magnet and even eradicate cancer cells.

So, if you were searching for meaning in your dreams, then a practitioner of gemstone therapy might suggest for you to place a piece of moldavite under your pillow at night.

For some stones, their nature and power are derived from their appearance. For example, rose quartz is said to be the stone of the heart. It can help you get over a breakup or help you find love. Why? Because it has a soft, pink color.

Smoky quartz has a dark, brown color. It’s meant to help you deal with shadow emotions and detoxify your mind, body and soul. Why? Because it has a smoky, dark, shadowy appearance.

The problem with crystal healing and gem therapy is that their properties are not evidence based. When purchasing a gem for healing, you’ll run into terms such as “promotes”, “used for”, and “is known to”.

How do you measure those types of results? So, it’s important to understand that the therapeutic properties of gemstones are not necessarily set in stone. (Excuse the pun).

What Does Science Say about the Therapeutic Properties of Gemstones and Crystals?

It’s extremely difficult to find credible scientists and medical doctors to endorse the healing properties of crystals and gem therapy. The practice has been around for centuries but there have only been a few scientific studies aimed at evaluating the benefits of gems in an empirical way.

So, I decided to take a deep dive into the world of gem therapy for our GC readers and help you separate fact from fiction. My first stop was Pakistan. Well, not literally, but there was an interesting study conducted in Pakistan back in 2009.

400 people participated in a survey at a community health center that focused on their beliefs and usage of gemstones. More than half of the participants were aware of the practice of gem therapy and slightly less than half felt that it was beneficial to their health.

The statistics that stood out to me the most in relation to this study was that 62% of participants felt that gemstone therapy was closely related to superstitious beliefs, but the number of people who believed it was beneficial was still relatively high.

My conclusion was that the effectiveness of gemstone therapy might be closely related to one’s preconceived notions of the power of gemstones and crystals. The effectiveness is difficult for scientists to quantify and calculate but that is just fine with people who are especially religious or spiritual in nature. In fact, that could actually support their belief in the efficacy of gem therapy.

The most well-known scientific study on crystal healing was conducted by Chris French in 2001. French and his associates at Goldsmiths College at the University of London published their findings at the British Psychological Society Centenary Annual Conference in Glasgow.

French told half of the 80 participants about the supposed effects of healing crystals and told the other half nothing at all before the experiment. Then, he had all the participants meditate for five minutes while holding a piece of quartz crystal.

Only half the participants were given real crystals. The others were plastic fakes. After the meditation session, just as many people reported feeling warm or tingly sensations in their hands regardless of whether they were holding real or fake crystals.

Participants who were primed beforehand with the knowledge of the crystal’s powers were more likely to report feeling something during their meditation. Those who believed in the healing power of crystals were twice as likely to feel an effect than those who didn’t believe it.

Basically, the crystals produced a placebo effect in participants who were already primed to believe in their powers. So, French’s findings were quite similar to the findings of the researchers in Pakistan. To be fair, researchers might not know how to properly measure auras and energy fields in relation to the human body and natural crystals.

So, further study should be done. It’s not fair to just dismiss crystal therapy as a pseudoscience simply because it exists outside the realm of known science. A 14th century alchemist would certainly agree.

There are two factors to consider when examining the power of crystal healing.

One: humans are very ritualistic. The mere act of focusing your intention through a crystal will engage your belief system and you can affect positive results simply by believing that you can. I believe in the power of the mind and if I choose to sleep on a lump of moldavite to have better dreams, then knowing it’s there could help activate my own abilities of self-reflection.

Two: Perhaps the properties of crystals and gems aren’t fully understood through scientific exploration. There is the possibility that our current language and knowledge lacks the wisdom to fully understand how and why crystal therapy works.

The practice goes back for thousands of years. Healers in ancient times might have had an ancestral wisdom regarding healing stones that modern medicine has neglected. We don’t really know how the pyramids were built. So, it is possible that there is a missing link when it comes to crystal therapy and the energy fields of the body.

If you want to try crystal therapy, then you should set your own intentions. Take control of the process with an open mind for its intended results. Some of the most common crystals used for alternative medicine are amethyst, rose quartz, opal, and rhodonite. However, you can find someone who will espouse numerous benefits to nearly every type of gem and crystal on the planet.

For best results, you should consult with a complementary and alternative medicine (CAM) specialist. They can recommend particular crystals for your case and help you plan the best way to utilize the crystals. Just be careful not to fall too deep down the rabbit hole. It goes way down.

Keep in mind that your belief that these crystals work plays a huge role in whether you’ll experience a positive outcome or not. As for me, I decided to buy that chunky piece of amethyst from my guru friend. Let’s just say I’m hedging my bets on a good night’s sleep.

Trending News: Anxiety bracelets are the new thing for reducing stress Did you hear the news? Anxiety bracelets have become all the rage for many people looking for something tangible to encourage calmness. I’m being […]

How to Move on From a Relationship For Broken Hearts

Table of Contents Coping strategies when you want to move on from a relationshipMoving On From a Relationship Hurts1. Accept (and Embrace) That Hurting Is Part of Healing2. Lose Visual Reminders of Relationship3. Focus on […]