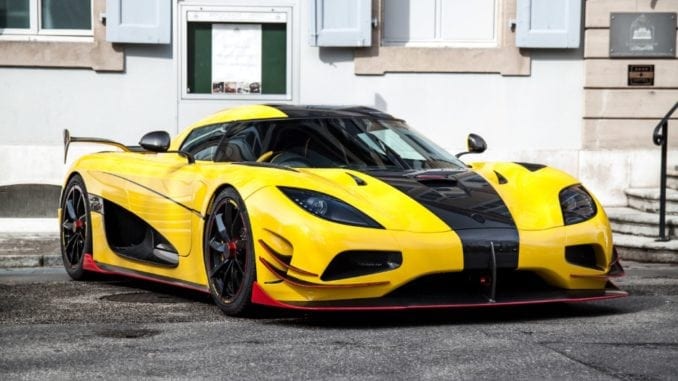 All about the Agera RS

The Agera RS from Koenigsegg is the fastest street-legal road car on the planet. It’s capable of achieving a top speed of 277.9 MPH. The closest competitor, the Hennessey Venom GT manages to reach a speed of 270 MPH.

There are only 25 models slated for production and 10 of them were sold before they ever left the production floor. That makes the Koenigsegg Agera RS extremely rare and valuable. Yet, for a supercar, the Agera RS is rather approachable – if you have around 2 million bucks.

Just take a closer look at some of the features and you’ll see why.

At first glance, the two-door Agera RS definitely has a short and wide track stance. It measures in at 4,293 mm in length and 2,050 mm in width. To give you a point of comparison, the Lamborghini Aventador Coupe is 4,780 mm long and 2,030 mm wide.

The Koenigsegg Agera RS supercar has a carbon fiber chassis with aluminum honeycomb and integrated fuel tanks that keep the weight of the vehicle down to just 1,295 kg. Even a Bugatti Chiron weighs in at 1,996 kg. So, you can start to get a glimpse at why the Agera RS is so fast.

It all starts with the design. Upfront, the Agera RS features a track-inspired front splitter and front winglets that channel the air around the vehicle. The profile features a prominent hollowed-out side skirt and side mirrors that are poised high above the frame for better visibility.

Maximum downforce is achieved by a hidden underbelly flap system and a dynamically active rear spoiler that rises over the rear wheel wells and dips in the middle. The ride height is electronically-adjustable and so are the hydraulic shock absorbers.

It sits on super-wide Pilot Sport Cup 2 tires by Michelin and hollowed-out, five spoke carbon fiber wheels, 20-inches in the rear and 19-inches in the front.

The hard top can even be removed and stored internally. Another super cool design element are the doors, which open up vertically to a 90-degree angle. When the front and rear bonnet are open with the doors up, this hypercar looks like a transformer.

The Koenigsegg Agera RS is built around an aluminum twin-turbo V8 engine that features the automakers’ patented back pressure reduction system. It also has a carbon fiber intake manifold. The Agera RS is managed by a 7-speed paddle shifter transmission that also features a gearbox control module and can be toggled to auto shifting mode.

Surprisingly, the engine of the Agera RS can run on E85 ethanol and regular unleaded gasoline. That means you can still get 1160 brake horsepower and 940-pound feet of torque from a fill-up at the local gas station. The steering and handling is tight and deliberate.

Stopping the Agera RS is coordinated by large ventilated ceramic disk brakes. There are also traction control functions and an electronic stability control system that can be configured for Wet, Track and Normal. Yet, it’s hard to describe normal driving conditions in a vehicle that roars like an angry titan that you’ve summoned from a thousand-year sleep.

You won’t find any door handles on this Koenigsegg supercar. You’ll have to find a hidden button on the rear outside panel of the door to access the interior. The key has a distinctive Koenigsegg shield shape that fits in the palm of your hand and only needs to be placed in the center console tray to activate the vehicle. The cockpit is a bit tight and low, as you could come to expect from such a short supercar.

There’s lots of carbon fiber on display inside as well as accent trims around the door paneling, seats and air con vents, all of which can be customized to the owner’s specifications.

The main user interface is a round control dial that is positioned in the center console. The steering wheel has a flat bottom that always reminds the driver that they are in a track-eating hypercar even though there are steering wheel controls that you would find on an Audi crossover.

The bucket seats come in suede or Nappa leather. That leather fabric motif continues even down to the carpet and up into the headliner. There is a digital touchscreen high in the center console and another digital display from the gauge cluster. In an unexpected twist, the Agera RS actually has a usable luggage compartment in the front of the vehicle.

Performance capabilities make the Agera RS the fastest production vehicle on the planet, but the additional features make it a true gem. In the tech department, you have an MP3 player, a USB port and a LifePo4 battery.

The center display shows your vehicle’s tire pressure and temperature. It can also adjust your side mirrors and seat settings. The steering assembly and pedal box can be adjusted to fit the driver.

There are two advanced stage airbags and a rearview camera for safety. You can also have your Agera RS outfitted with additional sound dampening if the rumble of the engine is too much for your taste.

No two Agera RS hypercars are built alike and the endless array of customized features make for bespoke driving machines that cater to every preference under the sun.

Although the Koenigsegg Agera RS is a street-legal hypercar that can travel close to 300 miles per hour, it’s not exactly meant for your day to day grocery runs. You’re going to get lots of engine and road noise from the Agera RS and the handling is also better suited for the race track.

However, the visual awe that you can inspire from just parking this vehicle outside on the curb is almost worth the cost of ownership because the Agera RS is one of the most gorgeous driving machines ever built. Great for guys who want to get their alpha on.

It’s also rather unpretentious. Now, it’s hard to say the fastest production car on the planet is unpretentious, but this thing has space for luggage, available roof racks, and takes regular gasoline.

If the Agera RS were your super wealthy friend from college, it’d be wearing Converse All-stars and drinking fair trade filter coffee from a ten-year-old thermos. Yeah, it’s totally cool like that.

Will you be buying one?

What Makes a Car Manly?

Manly cars explored Consumer psychology has always fascinated me, particularly the buying habits of men. That’s why a recent conversation I had with a buddy about manly cars was so entertaining. My friend Keith, an […]

Which auto wins out? We review and compare Crossovers and SUVs aren’t expected to have much off-road prowess these days, but that’s not the case with the 2019 Subaru Outback and the Toyota RAV4. These […]

Learn about the 2019 Honda Fit – Real Review The Honda Fit debuted on the U.S. market in 2007 and was well-received for being affordable and funky. It has fold-down seating for added cargo space […]