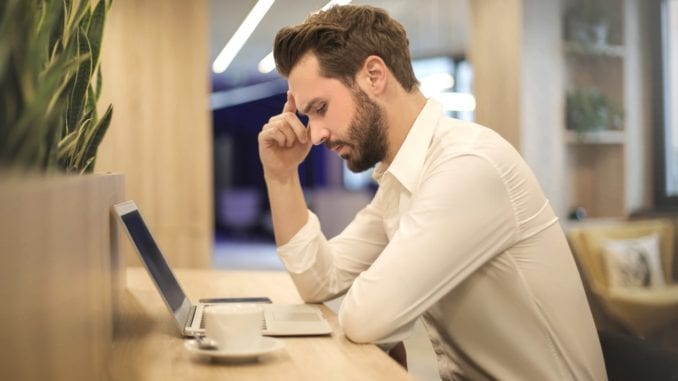 Trending News: How much work is too much?

In 2019, one would assume that working and at least having a job should be commendable. However, despite what some claim to be a booming economy, more men are now working harder than before. In fact, it is now being said that men are overworking themselves to death. The reasoning for this is likely numerous, so one study was done to look into it.

In fact, those same people also said that they were losing the obviously valuable sleep. Of course, sleep is important to the human body. This is how the body heals from different problems it might have, especially some sicknesses. The brain also needs time to turn off from its normal use as well.

The same study found that sleep, or any lack of it, influence creative thinking, the ability to work through problems, and even the potential to learn.

Why Are Men Overworking Themselves To Death?

To answer the title question regarding why men are overworking themselves to death, we first have to look at the facts of this study. The Chairman of the CHMF, Dr. Larry Goldberg, pointed to a number of things concerning about me. He mentioned that most men do not seem to be aware of their poor eating habits, coping methods, or bad sleep patterns.

He sums it up by saying in a press release:”Many men don’t realize they’re being unhealthy.”

Essentially, the study was able to determine that the lack of knowledge or acceptance of issues were ultimately causing the biggest issue. Meanwhile, if men were considering these important factors more, one would conclude that they’d do something about it.

Likely the biggest issue, and most concerning, is the pressure put on men to “suck it up” and to avoid their own health. It has been a pattern for years to see men avoid their own personal problems and health. All of this simply being done out of the pressure to provide for their families or pressure to move up in their career, likely even both.

We’ve all had that father or father-like figure who we can relate to this.

Men Are Working Themselves Sick

It seems like an easy thing to notice. Our fathers often never missed work or went to work while sick. You may only remember a handful of times your father stayed home from work outside of holidays or time off planned in advance. This too seems to be an issue for men. On top of these issues, men are seemingly working too many hours overall.

The study looked at this especially and found that 60% of men claim to work while sick, 61% skipped possible breaks in order to get in more work, while a good 29% admitted to skipping breaks three or more days a week. At this rate, it was determined some may avoid breaks altogether.

The worst part was that a solid 30% of men admitted to even working while they were supposed to be on vacation.

Wayne Hartrick, President of the Canadian Men’s Health Foundation said regarding this:

“These additional hours not only add to their stress, but the decrease in recreational or downtime also prevent [sick] men from having the opportunities to relax and de-stress.”

At this rate, it is not a wonder why we’re seeing a story like men overworking themselves to death. However, the study revealed even more terrible news.

Nearly Half Admit To Skipping Meals

That’s right, nearly half of all men in the study admitted to skipping a meal at least once a week during work. Even worse, one-fifth of the men claimed that they skipped at least three or more during a given a week.

Simply put, when you take away much-needed sleep and then take away clearly needed food, it is not a wonder men are dying younger. It has already been concluded that stress and anxiety related to a job can cause men to lose their hair or see it turn grey/white earlier in life.

In fact, this can happen as soon as the mid to late 20s.

The question is, how can men avoid these issues?

How Can We Do Better?

It is quite clear that men overworking themselves is an issue that needs to be addressed. Some would say the simple answer to the problem was to, ya know, not overwork yourself. However, the simple answer is not always the right one. Most experts say to take baby steps stepping back a bit from working so much.

Researchers claim that drinking more water will be useful while working. You can skip meals at times but not drinking water or being hydrated enough during a given day can lead to a lot of issues. That means you’d be better off having bottles of water near you or on your desk while working, so you drink it throughout the day.

It is also recommended to step away from your job for a bit during the day and take a short walk. This can be useful to do while you’re having a meeting over the phone or if you’re wearing a headset. The big goal of this is to bring some activity into play, which keeps you from getting overweight.

Combined with this, it is recommended to eat fewer foods that contain sugar and salt. On top of this, steer away from junk food and try to grab healthier snacks.

It is also scientifically proven that an apple in the morning can wake you up faster or as efficient as coffee. Plus, there is no drop as the fructose wakes you up but does not cause any sort of crash.

We Can Stop The Pattern Of Men Overworking Themselves

It seems to be quite clear that only we can stop the pattern of men overworking themselves. If we don’t, many of us will end up in an early grave. It could even be worse, you could be alive but suffer through the various issues mentioned above like erectile dysfunction, depression, and diabetes.

We need to end the pattern now and all of us are responsible in the end. For employers, force employees to have off days that do not include work or work-related activities. Make it a forced action for employees to have an hour or two of break time in a given day.

Many places only offer 30 minutes for a lunch break, even for full-time employees. Some offer an hour but sort of push it as a “lunch while working” type of thing. This needs to end if nothing else. Thus, employers have the ability to force change. However, as an employee, you have the power.

That means if you want to stop the issue of men overworking themselves a bit, start with yourself. Move on to another job if you must, as your health is more important than a job you hold. Even if you might need the work, is it enough to die young with only a resume to show for it?

Here’s Another Reason To Cut Back on Sugary Drinks

Apparently, sugary drinks can send you to an early grave Do you like dig sugary drinks, like a Coca-Cola or Mountain Dew? How about the ones that get you all jacked up, like Monster Energy? […]