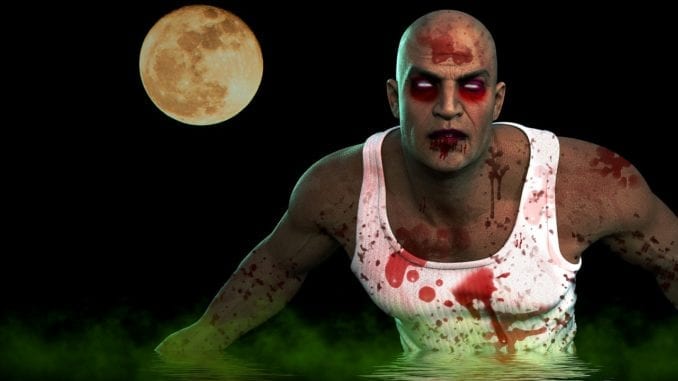 Why zombies captivate the imagination

Zombies are a mainstay in pop culture and entertainment. They are one of the most user-friendly monsters that humans have ever created. They’re sluggish, gory and strikingly familiar.

At times, zombies are portrayed as frightening, unstoppable abominations that crawl out of the grave to eat your brain. In other manifestations, zombies can be used to produce fodder for comedies like Shawn of the Dead and Warm Bodies.

Why do people love zombies so much though? What is it about them that keeps them lurking around in our social media feeds all year long, not just around Halloween? Here are a few reasons why zombies are so frikkin’ cool:

AMC’s The Walking Dead is one of the most popular TV shows ever produced and the series has a die-hard following. With almost 10 years of airtime and 131 episodes of content, The Walking Dead just keeps on going. That’s no small feat when the word “dead” is embedded in the title.

Zombies are being wasted by the dozens in every episode, so much so, that each episode ends with a recap of all the walkers that’ve been killed. Also, a number of main characters are killed-off each season. So far, 42 significant characters have been killed, either by zombies or other survivors of the zombie apocalypse.

Yet, this show has staying power because of the incredible source material. It’s based on a comic book by Robert Kirkman that is still producing issues.

Sometimes, the TV show diverges from the storyline of the comic books, but Kirkman’s comic book stories provide showrunners with new characters and plotlines to keep the suspenseful drama going strong.

AMC’s The Walking Dead is waning in popularity though. Audiences might have a case of zombie-fatigue after eight seasons or perhaps they were disenchanted by the long, protracted war between Rick’s group and Negan’s group – an all-out war that tugged on the audience’s emotional heartstrings and tested their patience to the limits. Before that, audience numbers were incredibly high.

In season 5, a single episode garnered 17.29 million viewers. To put that in perspective, HBO’s hit show Game of Thrones is also based on a book, but its highest viewing numbers peaked at 8.89 million.

Let’s face it folks – zombies are scary and fun. I’m a big fan of AMC’s The Walking Dead and I’ve seen nearly every episode. My love for the show prompted me to envision a different kind of zombie apocalypse, one in which humans have created the zombies and must survive to develop a worldwide cure.

If you love zombies as much as I do, then be sure to check out my latest novel – The Zombie Doctor (See Amazon).

2. An Apocalypse We Can Handle

It happens every few years – someone comes up with a scenario that brings humanity to the brink of global catastrophe and it just so happens to be coming soon. THE APOCALYPSE. You might remember Y2K, the Mayan Calendar and 2012, or even various religious prophesies about the end of the world coming soon. For some reason, humanity loves entertaining the notion that soon we’re all about to be wiped off the face of the earth.

Shmuel Lissek, a neuroscientist from the University of Minnesota, believes that our love for doomsday is closely linked to the fear mechanisms in our brain. Any hint of alarm triggers fear and helps us survive.

In a study on the science of fear, Lissek found that when subjects were able to anticipate a traumatic or painful experience, they were more likely to relax and prepare for the worst.

That makes sense when you consider the zombie apocalypse. Zombies are slow-moving creatures and lack cognitive functions. They present a danger, for sure, but they can be dispatched with a well-timed blow to the head.

In my book THE ZOMBIE DOCTOR, the protagonist’s preferred weapon against zombies is an industrial-strength hammer.

Zombies give humans a fighting chance to save themselves even though this type of apocalypse would be devastating to our way of life. Just imagine that your long dead relatives have returned from the grave and you must re-kill them to survive. Pretty gruesome stuff, right?

It’s highly unlikely to occur, which transfers fear into excitement. Like Lissek suggest, we can anticipate the zombies and relax our fight-or-flight instinct just long enough to have a good time.

3. The Promise of Violence

Zombies are mindless creatures that can’t understand reason. They have one single motivation and that’s to feed an insatiable hunger cooked up from the bowels of Hell.

The only way to stop them is to unleash your own primal instincts and get violent. Zombies don’t respond well to negotiations, but they seem to respect a good slash and bash. Zombies promise violence in a very simple package. Either they will eat you alive or you’ll kill them first. There isn’t much else to it.

Violence has a strange and intriguing effect on the brain. It’s very similar to our reaction to pleasure. Violence releases dopamine, the feel-good hormone. Maria Couppis, who conducted a study on violence at Vanderbilt University, found that aggression can be just as rewarding as sex or drugs.

“It is well known that dopamine is produced in response to rewarding stimuli such as food, sex and drugs of abuse,” notes Couppis. “What we have now found is that it also serves as positive reinforcement for aggression.”

Some people seek out violent encounters simply for the pleasurable response that they elicit. One of the reasons we love zombies so much is that we can imagine ourselves knocking through a horde of hungry zombies and exercising that violent side of ourselves in a predictable and morally-acceptable fashion.

Violence is a basic form of human expression, but there are fewer and fewer suitable avenues to demonstrate it in our civilized society. There’s martial arts and simulated violence through entertainment, but the consequences of using violence in the “real world” are so high that most people have never even thrown a punch at another human being.

Killing a zombie won’t challenge your morality. It’s a safe shot of aggression-fueled dopamine for your brain.

If your eyebrows raised at the idea of zombies helping us to relax, then hear me out. Consider your day-to-day grind. You’ve got responsibilities at work. You’ve got an endless barrage of ideas and images coming at you from every screen you pass all day long.

You’ve got national, societal, religious and cultural expectations that constantly nag at your decision-making process. And to top it all off, that guy just cut you off during rush hour traffic.

Related: Why am I dreaming of being chased?

That’s the world we live in, but a zombie apocalypse returns us to a simpler way of life. Governments have crumbled. Technology has failed us. And the only duty we truly have left is to stay alive.

It might sound paradoxical but trying to stay alive in a zombie apocalypse could actually be relaxing compared to the stressful world we live in today.

You don’t have any emails to answer. You don’t have any car payments to make. Sounds good, right? Zombies take away some of our stress because they remove us from the day-to-day routine and transplant our imaginations into a world where simplicity reigns supreme.

The task is clear: survive. The enemy is even clearer: mindless zombies.  Now, isn’t that relaxing?

Zombies can be utterly terrifying when presented in a suspenseful setting with genuine peril and risk involved. Yet, they can also be silly, dim-witted, knuckle-draggers who you don’t have to feel guilty about destroying.

That’s the beauty of zombies – they’re versatile and universally appealing. Watching zombies on television or reading zombie thrillers exercises our emotions in such a captivating way.

They’re certainly dangerous, but just slightly. They’re ethereal and haunting, but they were once human beings just like you and me. That makes them special and useful to our core motivations.

I love zombies and I’d love to know what you love about zombies, too. If you were in a zombie apocalypse, what would be your weapon of choice against the foot-dragging, undead minions?

What Do the Five Stages of Grief Actually Mean?

5 stages of grief explained In 1969 psychiatrist Elizabeth Kübler-Ross published a seminal article entitled On Death and Dying, inspired by her work with the terminally ill. In it, she outlined five stages of grief: […]