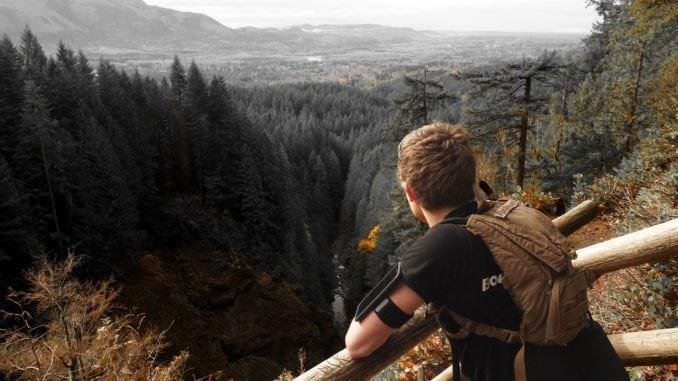 We’ve long since known that spending time in nature can have a positive impact on mood. This is particularly true for people who struggle with problems like anxiety and depression.

But can watching nature on television or in movies offer any benefits?

According to a new study appearing in the journal Body Image, the answer appears to be yes. That’s right, programs like Survivorman and Yellowstone might be good for you.

The study was jointly conducted by researchers from Anglia Ruskin University in the UK and Perdana University in Malaysia. Participants were asked to watch two three-minute films that were created from the first-person perspective.

In one of the films, a short walk was featured through Cambridge city centre. The other film shot from the banks of the River Cam in Grantchester, not far from Cambridge, England.

Said Professor Swami in a press release: “There are a number of possible explanations for our results, including the idea that natural environments promote ‘soft fascination’, which is a state of cognitive quiet that fosters self-kindness and helps individuals have a more compassionate view of their body.”

Swami went on to say, “Views of rivers and trees are also devoid of any reminders of materialism, and so allows the viewer respite from thoughts of consumption and image.

However, more work still needs to be done to fully understand exactly how exposure to natural environments promotes improvements in body image, as well as how our findings here translate to how people view nature films outside the laboratory. For example, if we watch Springwatch [BBC show] on the sofa whilst at the same time checking our Twitter feed, it’s possible the natural scenes might not have the same immersive effect.”

“However, our findings suggest that there could be a straightforward and low-cost solution for promoting healthier body image, particularly for individuals who may not have easy access to real natural environments, for example if they live in a city centre or because of a lack of mobility.”

Bottom line – if you happen to be a person struggling with body image issues, it may be a good idea to tune into something with a nature theme.

According to this new study, it can’t hurt and may even be helpful. Wild Kingdom anyone?

Three Masks Men Hide Behind That Might Surprise You!

The Mask of Masculinity We men have many masks we hide behind, but there are three masks which govern most of our lives. These masks are society backed. socially acceptable and even wanted by many […]

Trending News: Tapping your way to happiness A recent study appearing in the Journal of Evidence Based Integrative Medicine shows that tapping therapy, officially known as the Emotional Freedom Techniques (EFT), may significantly increase feelings […]

5 Reasons Men Have Fear of Intimacy

Fear of Intimacy Fear of intimacy in men is big problem for many men. Regardless of how he feels about another person, whether that person is a significant other or someone they are just getting […]