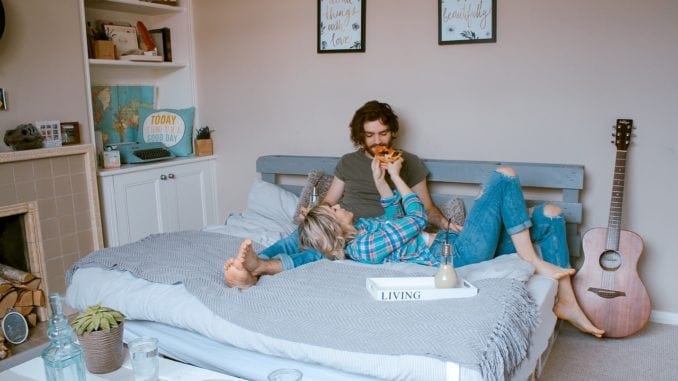 Have you heard of the urban legend about new relationships causing people to get fat? Well, according to a newly released study by the folks at Jenny Craig, it’s not a myth.

In fact, the research, as reported by the folks at Fox News, is sort of eye-popping. That’s because we’re not talking about one or two pounds. Nope, instead, think major weight gain.

Well, according to the conclusions of the Jenny Craig study, some folks gain up to 17-pounds extra during the first year of their relationship.

When you add this up between two people, we’re talking about a whopping 36-pounds in total.

You may be wondering what’s behind the extra blubber? All we can tell you is what the data reveals. Six in ten indicated they felt less pressure keep the weight off because they were attached to someone.

Forty-one percent believed the source of the added weight was because of dining out (think fast food). Another thirty-four percent blamed the extra poundage on alcohol, presumably because new couples tend to drink more.

Oh, by the way – marriage is also bad for your waist, particularly for guys. Per the findings, men pack on an extra twenty-two pounds in the first year after tying the knot. Women, on the other hand, gain an average of 13-pounds.

Guy Counseling was curious about the results and spoke to Dr. Tyler Fortman, a licensed psychologist in Chicago and contributor to the blog.

“These findings don’t surprise me at all. It’s really common for people to perceive stability and predictability in relationships as a destination and not a process.

This seems to be at play with weight gain. Partners in a relationship become less disciplined with their diets and exercise because they’ve “made it.”

In fact, this is dangerous thinking. It leads to complacency in lots of ways, including weight gain,” said Fortman.

Now there is some good news, which happens to be fortuitous for the folks at Jenny Craig. Apparently, couples who put on the extra pounds work hard [at some point] to get rid of them.

“The data shows that while people have gained weight in a relationship, they are recognizing that they need to lose it, and that is great news for their health,” said Monty Sharma, CEO of Jenny Craig.”

Well, there you have it. Do the results surprise you?

Here’s Why Listening To Music Boosts a Happiness Brain Chemical

Trending News: Link made between pleasure chemical and music Have you ever been in a funk and reached for music? When you popped in your earbuds and listened to your favorite tunes, did the experience […]