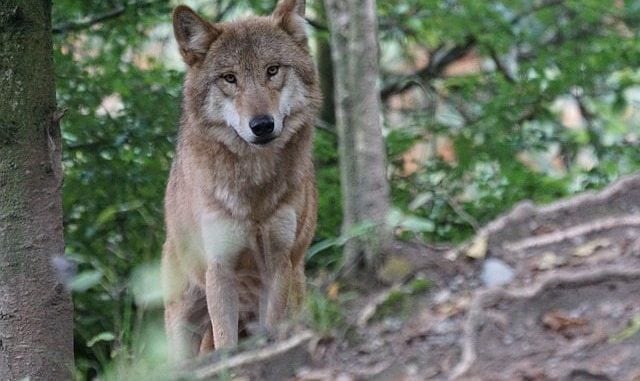 Many people have a fear of running into in wolf outdoors. But, contrary to popular belief, wolves very rarely attack or even approach human beings. Most of the available research suggests they stay far away from people and the places they congregate; like campgrounds and hiking trails.

However, while most wolves generally stick to this pattern of behavior, there are a rare few that may lose their natural fear of people and find themselves wandering into places you don’t want to see them.

Here, I’m talking about a running trail, campsite or even your backyard. Again, it doesn’t happen often. But there have been reported cases of wolves (and coyotes) showing up in unexpected places.

Check out the video below.

How to Keep Wolves Away

You can easily steer clear of wolves and prevent an attack by being mindful that you are out in the wilderness.  An excellent way to do this is by focusing on your situational survival skills and staying keenly aware of your surroundings.

If you are camping, then the best way to keep wolves away is to clean up after yourself once you are done eating. Dispose all food and other refuse far away from your campsite. Leaving it out is like leaving an open invitation to wolves and wildlife critters.

FYI: Wolves have a highly developed sense of smell. They will walk for hours in search of food, using their nose as a guide. If you’ve thrown out a piece of chicken or half a hamburger, there’s a good chance a wolf can smell it as far away as a mile.

Speaking of smell, wolves are extremely good at detecting other animals, particularly ones that aren’t part of their pack. To keep it real, this means they can smell your dog.

That’s why I encourage you to keep an eye on your pets when outdoors. This goes for the kids, too. When camping or hiking, don’t let them wander off. Wolves specifically look for animals that are alone and vulnerable.

There have been cases where wolves go after dogs and kill them. The video below shows a series of brutal wolf attacks on domestic canines. Not easy to watch so I am just giving you fair warning.

What to Do If a Wolf Approaches You

If you see a wolf from far away and it doesn’t see you, or if it does see you but makes no motions to come towards you, it’s important to back away and get out of the area.

If, however, the wolf begins to approach and act aggressively, then you need to be ready to stand your ground. First, make sure to bring your group together and scoop up small children from the ground.

If there is a hungry wolf in the area, he’ll go after the easy targets first.

I’m not saying this to scare you. There was a case not too many years ago where a five year old was killed by a hybrid wolf.

Second, you need to fight your instinct to run, as this will only encourage the wolf’s natural chase impulse. Instead, wave your arms to make yourself appear as large as possible, making a lot of noise while you’re at it. Yell and holler – make sure the wolf and everyone else hears you.

If possible, look for rocks, wood and even dirt. You can use these as throwing weapons should the wolf get too close.  Don’t worry about injuring the animal. Remember, this is your survival we’re talking about.

If you are in bear country and you’re carrying a canister of repellent, use it on the wolf without reservation. Once you have disabled the animal, don’t wait around to check on its welfare. Instead, walk away. Your goal isn’t to kill. Instead, it’s to buy yourself enough time to escape.

What to Do If a Wolf Attacks

If the wolf continues its advance and begins to attack and you don’t have any weapons (or have exhausted them) don’t make the mistake of playing dead. That may be great advice for bear attacks but wolves are different. That’s because their instincts are different. Wolves take a “kill first” approach, meaning they take down prey as fast as possible with deadly force.

Should a wolf initiate an attack on you, the most important thing to do is fight back. With as much focus as possible, go after the wolf’s sensitive snout. Punch it, kick it or do whatever else is necessary to inflict pain.

Other sensitive areas are the wolf’s legs, feet and ears. If you can get your hands on a stick, use it on his vulnerable areas, do it. Once you start striking him, the wolf will most likely break off his attack and leave the area.

It’s very unlikely you will ever be attacked by a wolf. The same holds true for coyotes. What is possible is spotting a wolf that’s on the hunt for food. Most of the time, once he sees you, he’ll run away.

But if that wolf is hungry enough or feels threatened, he could attack. Make sure you are ready.

Hiking and Backpacking Essentials Hiking is a lot of fun but the experience can go south fast unless you’ve packed the proper supplies. Take it from me – I’ve found myself deep into the Wisconsin […]

How to Plan for a Canoe Camping Trip

Canoe Camping Trip Essentials If you’ve ever dreamed of gliding down a forest-lined stream for days on end with no agenda beyond the nightly ritual of setting camp and whipping up a hearty meal, it’s […]

How to Build a Fire for Camping, Cooking and Survival!

Build a fire for camping, cooking, survival and more! Man and fire are inseparable. And although we no longer depend on wood fires for our cooking and warmth, knowing how to build a campfire is […]