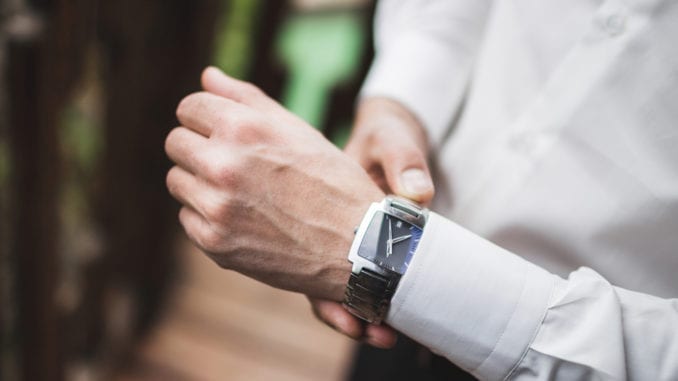 One of the many things that separate the men from the boys is fine timepieces. They say you are what you eat, but what you wear beneath your sleeve tells much more: Your status, your style, your legacy.

Unlike designer clothes, iconic watch designs last for decades and are worth the investment.

And if you are looking for one or happen to be a watch enthusiast, these seven ticking stars serve as the recommended non-round (or “less commercial”) selections, complete with the finest men who may have worn them best.

All images are embedded directly from Instagram from various sources.

Little did people know that Panerai during their initial decades was none other than a multi-brand boutique in Florence, Italy, that touted various timekeeping instruments to local customers.

Then, the Italian navy took notice and held them as a supplier for diving wristwatches. Over time, founder Giovanni Panerai modified details of those timepieces which became the basis of the brand’s own design DNA today.

Silvester Stallone was among the Hollywood stars who caught the bug before Panerai hit it big time in early noughties. He was soon followed by a number of athletes who preferred big watches on their wrist, not to really tell the time per se, but to match their egos.

Even Tom Cruise sported a Luminor in one of “Tropic Thunder” scenes. Yet, none can beat a true die-hard Paneristi (Panerai lover) such as Bruce Willis, who picked a Radiomir when making appearances on red carpets.

The big question for a Panerai virgin prior to purchasing one is: Radiomir or Luminor? The main difference between the two is Luminor’s bulky crown protector, a necessity for the former navy back in 1950s.

If you put originality above everything else however, Radiomir stands as one of the simplest yet most elegant cushion-shaped watches that still exist to this day.

Mind you, since it was created as a functional diving watch, the case comes in with a quite beefy proportion—yet perfect for humble brag.

The ingenuity of a Cartier Tank watch doesn’t merely lie on its art deco design. It goes back to the time when the World War I took place, in 1917 to be exact.

It was Louis Cartier [pronounced “Kaar-tee-yay”], one of the three Cartier sons and the seminal creative director, who saw British tank Renault FT-17 and reinterpreted that for a most sumptuous rectangular accessory to date.

He crafted the rectangular case to be resembling the tank as seen from above, with the protruding lugs resembling extending caterpillar tracks.

The white-and-black watch dial uses “rail track” line markers before the roman numerals. And the most elegant finishing touch is the unique blue sapphire on top of the crown, a precious reimagination of a tank’s deadliest part, the gun.

As impressive as the watch’s aesthetics is the endless list of world-famous celebrities who have chosen this Cartier piece as their go-to watch throughout their career. In the film industry, there are Clark Gable, Cary Grant, Alain Delon, Warren Beaty, Richard Gere, Jeff Goldblum, Andy Lau and the list goes on.

In politics and journalism, Jacqueline Kennedy, Truman Capote, Lady Diana, Emmannuel Macron have graced their wrist with the most recognizable ticking rectangle. Most of them chose the minimalistic and slim (and quite affordable) Tank Solo.

The octagonal Royal Oak is synonymous with the nouveau riche. Many, however, are less informed on the interesting history behind the stainless-steel timepiece, let alone the brand.

Audemars Piguet [pronounced “O-de-mahr pee-gay”] has often been casually noted as one of the Holy Trinity/Big Three of Swiss watchmaking (the other two are Vacheron Constantin and Patek Philippe). It’s independently owned by the Piguet family, hence the annual limited production.

It was also the first brand back in 1972 who went against the stream by introducing the Royal Oak, the first “expensive” stainless steel watch which was also designed by the late Gérald Genta, the Leonardo da Vinci of watchmaking.

Some of its pioneering features are the octagonal case with intentionally bare screws on top (first of its kind) and the elegantly connected bracelet (different from other brands, except that of the Patek Philippe watch by Mr. Genta).

Today the Royal Oak has been relaunched in various models and materials, not excluding the Royal Oak Offshore, the diving watch version. Jay-Z, Usher, Lionel Messi, Serena Williams, James Corden, Neil Patrick Harris are among the celebs who loved wearing this octagonal beauty.

A tonneau or barrel-shaped watch is an acquired taste. A few names who have dipped their toe in the game are Vacheron Constantin, Cartier and Franck Muller.

The first came with the Malte Tonneau, an exquisite timepiece equipped with equally exquisite complications. As a result, Vacheron Constantin’s Tonneau fetched a stellar price that only the wealthy bunch could afford.

Cartier jumped on the bandwagon with the Tortue watch, which didn’t fare as well as their other lines. But for Franck Muller, tonneaus surged to be their expertise.

A little bit on the background, Franck Muller, the person, is a Swiss watchmaker who had honed his watchmaking flair through decades of perseverance. One of his latest professional posts was handling the haute horlogerie (fine timepieces) at Patek Philippe.

It’s not a secret that for those who have held top posts at that company are potential to branch out and kickstart their own brands (just like what Roger Dubuis did).

Of course, to aspire on his own, Muller challenged himself to perfect his technique and craftsmanship.

A tonneau case (the watch shape) is pretty specific, meaning that the inside mechanism also has to conform with the available space. Innovatively, Muller also upped the ante by adding a tad garish touch to the dial, which attracted the attention of a number of celebrities.

The Franck Muller Vanguard Tonneau timepiece has made the wrists of Elton John, Kanye West, Demi Moore, to name a few, look ready to sign a million-dollar deal.

Have you ever heard a watch that could swivel to expose the second face (dial)? Now, you’re about to discover not only legendary but also a masterpiece that became a worldwide sensation back when it was first introduced in 1931.

Jaeger-LeCoultre [pronounced “Zhay-zhair le-coult”], as a company, was and is a watch complication master who’s always busy tweaking what’s on the inside rather on the outside.

But when Jacques-David LeCoultre, the then owner, heard about the challenge to create a watch that could help the British army playing a polo game in India without worrying of breaking their watch, he rose to the occasion.

“Reverso” itself means “I turn around” in Latin. The original watch is rather slender on the wrist, but if you push it to the right, it can swivel around to reveal a stainless-steel back, transforming the watch into a seemingly steel bracelet.

This ingenious creativity soared to popularity back in France, as the elongated case also looked astonishingly handsome.

Over the years, Jaeger-LeCoultre developed the watch into much more than just a timekeeping instrument. Initially, people got the watch to have the stainless-steel back engraved with their names or any insignia they’d like to treasure.

Avid watch collectors desired the back to be another watch dial, just for a different time zone. Today, Jaeger-LeCoultre has perhaps created the most technically challenging timepiece with a gyro-tourbillon complication in Reverso—basically, a super-accurate timekeeper.

Although Reverso isn’t as commercial as its counterparts from other manufacturers, elegant Hollywood stars, including Pierce Brosnan, Leo DiCaprio, Matt Damon, Jamie Foxx, Christian Bale, have shown the looks of various Reverso designs which elevated their dashing presence to the nines.

True watch insiders know that wristwatches were initially designed after the old pocket watches. As fate would have it, in early 1900s, Brazilian aviator and socialite Alberto Santos-Dumont found his pocket timepiece troublesome when he’s venturing airborne (albeit a short test flight it was back then).

Louis Cartier, his dear friend, took the matter to the heart and resolutely came with a very daring answer: the Santos watch.

Unlike any wristwatch at that time, the Santos was decidedly square, sending out a statement that it wasn’t inspired by house clocks. In fact, it then galvanized the whole watchmaking industry to follow the lead and shift their pocket watchmaking production to focusing on wristwatches.

But here’s the most important thing about Santos: It’s not just a piece of undeniable history as the first commercial wristwatch in the world, but its design has transcended decades after decades.

Even the first prototype already took in elements of art deco which are still relevant to this very day. Take cues from how Justin Timberlake, Tyrese Gibson, Jake Gyllenhaal, Michael Douglas incorporated that boxy watch into their everyday look.

The Santos is a watch that started the movement for wristwatch creations and most likely will also see the day when wristwatches become a thing of the past.

There are handsome non-round watches, and there are rare non-round watches. The Patek Philippe Nautilus has it all, really. From the historical departure to the sumptuous design elements to the hard-to-get quality, this is a watch that stays at the pinnacle of collectors’ favorites.

After the launch of Audemars Piguet Royal Oak in 1972, Patek Philippe wanted to craft its own top-tier stainless-steel timepiece. So, they summoned Gérald Genta to do one amazing masterpiece, released only four years after.

He took inspiration from nautilus shells, with a smooth architectural curve, hence the watch’s superbly embracing bracelet. The watch case is a lovechild between round and square, and the dial is deceivingly simple.

The embossed lines on the dial are a trademark that beguiles the eyes of both collectors and newbies, and when reflecting light, its resplendent blue harks back to the nautilus shell concept.

With all that said, it’s not hard at all to fall in love with this fine timepiece. Brad Pitt, Robert Downey Jr. Ed Sheeran, Connor McGregor are just a slew of the fallen victims. The only problem in getting a hand on this watch (aside from its extravagantly expensive price tag) is that it rarely stops by a Patek Philippe boutique.

All the wealthiest collectors in the world always have an eye for it. Any Patek Philippe boutique in the world, as a matter of fact, gets customers day in, day out asking for it. Its rarity is as extremely distressing as its price range in any watch auction.

Even the design of the first watch of Nautilus (that only tells time, and no other timekeeping features like moon phase or chronograph/stopwatch) can easily beat the price of any über-complicated timepiece.

Then again, that’s the price you’re willing to pay when you’re falling in love, right?

About Chris Andre 3 Articles
Chris Andre is a self-professed polymath who patiently nurtures an insatiable hunger for new discoveries as well as writing. While he currently engages in marketing affairs, his background in journalism varied greatly from business profile interviews to men's fashion to fine timepieces. Visit him on Linked In
LinkedIn

Auction for McQueen’s Rolex in December Are you a fan of Steve McQueen? How about Rolex watches? If the answer is yes, you can have a little bit of both. But there is one catch. […]

Would You Spend 3 Million on a Rolex?

A Rolex Daytona is going on the market for a whopping 3 million dollars in May. SHORT STORY If you have an extra couple of million dollars to spare, you can pick up the affectionately […]