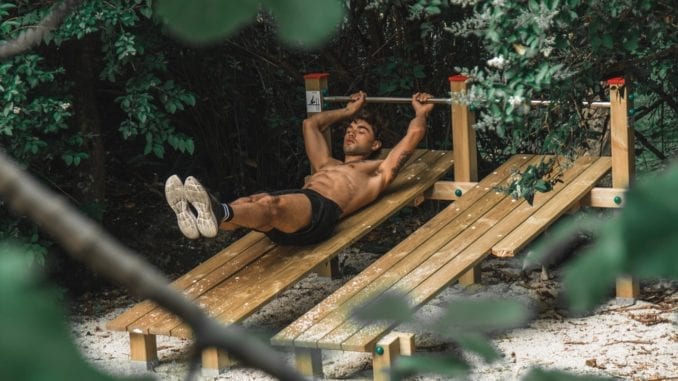 I decided to move through my fears and just do it

Last week, I walked by a public park near my house and saw a group of people exercising. One guy was doing chin-ups. Another dude was grinding out elevated pushups. There was even a mom in the mix, showing her toddler how to stretch.

I’m not sure why, but I felt inspired.

Don’t get me wrong, I’ve seen people exercising at the park for many years. Maybe you’ve observed the same thing? At any rate, there was just something about seeing these folks last week doing their thing – unabashed – that touched a deep part of me.

Here’s what you need to know. I’ve got social anxiety. When I say that, I don’t mean the watered-down term that many folks bandy about as a cover for being shy.

Nope, I’ve got social anxiety in the clinical sense, meaning that I fear doing things in public because I think I’ll embarrass myself.

If you’ve ever struggled with public speaking or worry about being in a crowd, you know exactly what I’m talking about. It’s a deep fear that can be crippling – to the point that it can trigger a panic attack.

It’s not like I haven’t tried to deal with this problem in the past. I’ve gone through therapy. I’ve engaged in cognitive rehearsals. I’ve even partaken in exposure therapy.

And while all these things helped, at least on some level, nothing healed me more than the day I did those abs in the park. That’s because I gave myself permission to disconnect from my thoughts and just do it.

In my case, I decided to walk over to a board plank in the park and began cranking out crunches. The day I did it, I was wearing shorts and a t-shirt – on the way back from the gym I usually exercise at.

The best part the whole thing was working my abs while other people were around. Yep, that’s right. I wasn’t alone. There were folks doing various exercises, similar to the ones I described earlier.

Shoot, there were even onlookers; people from the neighborhood walking their dogs and pausing to see what was up in the park.

Did I have the best ab workout ever? Probably not. But I did leave the experience with a new-found sense of self. To me, that was way more meaningful than what my abs actually look like.

So, the moral of this post is simple. Sometimes, you have to face your fears and simply “do it”. By separating yourself from your thoughts, you unplug the fear.

Inner Confidence vs. Outer Techniques: What To Focus On?

Fake body language You walk into a bar and spot a gorgeous looking girl and you want to approach her. Your hands start sweating, your heart starts to pump like crazy and you feel hectic […]

Do you engage in irrational thinking? Irrational thinking – it’s a term we often hear about, but what does it really mean? Moreover, is there a relationship between cognitive distortions and anxiety? If you’ve ever […]

Table of Contents Learn how hypnotherapy may help you with anxietyWhat is hypnosis?Does Hypnotherapy Work?Clinical Hypnotherapy for Anxiety1. Lessen intensity of panic attacks2. Reduce ritualistic behaviors3. Ameliorate PTSD symptoms4. Work through phobias5. Move past a […]