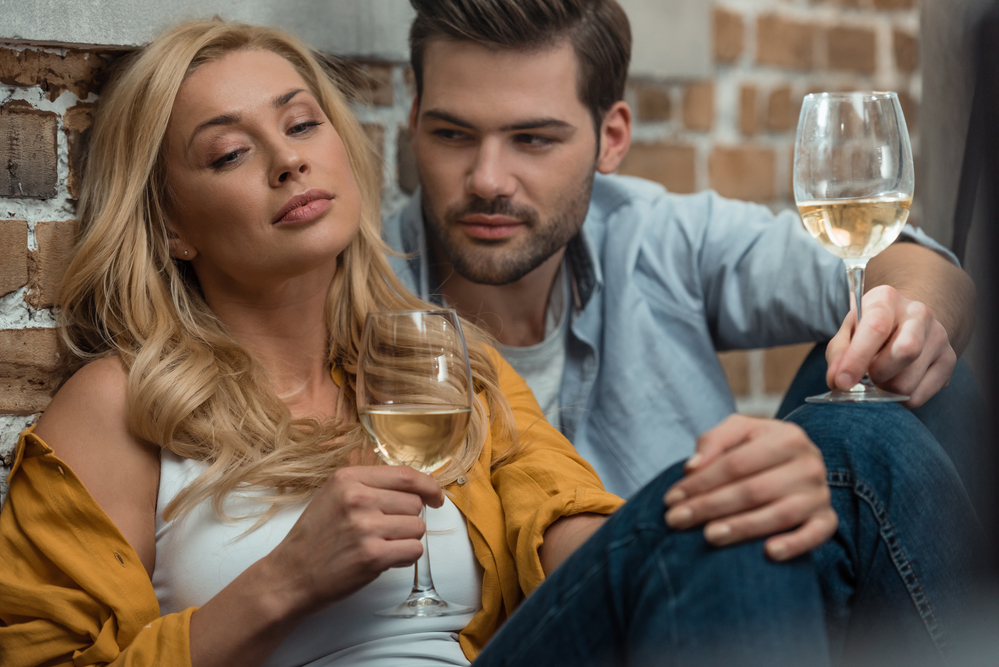 Have you ever had a drunk hookup? You know what I’m talking about, right? That’s when you’ve had way too many drinks and combined that experience with someone else who also happens to be inebriated.

Can you relate? If so, you wouldn’t be alone. Many people have found themselves in exactly this type of situation, consensually of course.

But is getting your intimacy on while drunk a good idea? The choice, of course, is up to you. What follows are 10 things about drunk hookups that might surprise you. Yep, we’re talking about the good, bad, and ugly.

There’s no question about it. Upon having a few drinks, you will experience an initial high as alcohol crosses the blood-brain barrier and flows into your system.

But over the course of time, alcohol actually transforms into a central nervous system depressant, thereby dulling all of your senses, particularly touch.

Have you ever heard of the term liquid courage? In short, this is when you’ve tied a few on and experience a lowering of inhibitions.

Examples include feeling less worried about body image issues or less concerned about being rejected. In the bedroom, lower inhibitions can translate into reduced anxiety about pleasing a partner.

3. Booze centers you in the moment.

While this one may initially sound crazy, it’s not when you think about it. As a result of point number two, alcohol can help a person experience less anxiety, thereby allowing them to forget about personal worries, also known as anxiety.

Granted, the effects are only temporary and will diminish as the booze wears off. But during the peak period, an intoxicated person is less stressed and more relaxed.

In turn, they are more likely to stay in the moment and tuned into the person they are sleeping with.

There’s plenty of research to suggest that people who are drunk feel more attracted to a partner than they might otherwise sober.

In fact, there is a phenomenon known as beer goggles whereby a person experiences intense attraction. Some have called this a cognitive distortion.

While this may be partially true, other factors also go into the dynamic, such as the intoxicated person’s state of mind and general libido state.

It doesn’t matter if you get drunk off whiskey or beer. When you are intoxicated, you are less likely to experience feeling state emotions, such as pleasure and love.

And while it is true you may be more focused on the moment, that doesn’t always mean you stay attuned to your partner. In fact, drunken hookups can paradoxically act as an emotional separator, causing some folks to feel less attached.

This one should come as no surprise. When you are drunk, you may poor choices, also known as impaired judgment clinical circles.

The end result can mean engaging in risky sex or partaking in activities, such as using substances, that you might otherwise sober.

Wanting to do something and actually carrying it through to completion are two different things. This is particularly true when you are drunk and trying to get your fun on in the bedroom.

For men, it is very common to experience decreased erectile functioning. For women, vaginal dehydration can occur.

When you are drunk, you sometimes say things that you later regret. In the context of bedroom intimacy, this can mean saying something to a mate that would never mention while sober.

Examples include professing a secret love another person or being critical a mate’s body part. Some women have reported being fat-shamed by a drunk partner; something that obviously would be an immediate buzzkill.

Perhaps one of the most embarrassing things that can happen during sexy-time is when you or your partner accidentally fart. This is particularly true during a first time hook up.

Alcohol is an irritant to the entire gastrointestinal system. As a result, it creates gasses as a way of evacuating itself of waste and toxins.

Certain types of alcohol, such as beer, are more likely to make you fart. The reason? Most commercial beers are injected with gas as part of the manufacturing process. In addition, ethanol, a key ingredient in beer, also promotes gas formation within the digestive tract.

One doesn’t have to be blackout drunk to forget certain details while intoxicated. Even small amounts of booze can cause lapses in memory.

Take a moment right now and reflect on the last time you shared intimacy while intoxicated. How much of it do you really remember? Chances are, not much.

There’s nothing wrong with two people enjoying a few drinks and consensually becoming intimate. But if your goal is to experience something pleasurable and memorable, you might want to skip the booze altogether.

Remember there is always a morning after. Wouldn’t you rather wake up refreshed and restored with no regrets?

Are Two Drinks A Day Too Many For Some Men?

Men who consumed alcohol during late teens may be at increased risk for liver disease. A new study appearing in the Journal of Hepatology offers new insight into men who are at risk for liver […]

Cutting Back on Alcohol May Help You Stop Smoking

Trending News: Reducing Alcohol May Help You Quit Cigs Are you thinking of quitting smoking in the new year? Hoping to increase your chances of staying quit for as long as possible? If so, you […]

Are You Getting Your Intimacy Needs Met Through Hookups?

Trending News: Intimacy comes in many forms Do you like hooking up? If so, do you prefer this type of encounter because the “no strings attached” [NSA] dynamic allows you to get certain needs met? […]