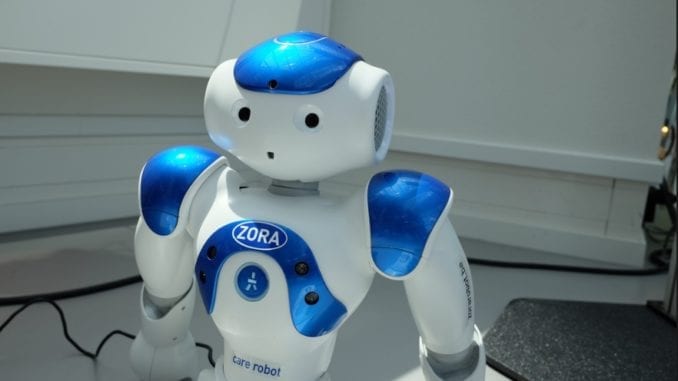 Robots – they aren’t a new concept. In some form or another, they’ve been part of our pop culture for decades. One only has to look at R2D2, C3PO or BB8 from the Star Wars franchise as examples.

In many ways, robotic companions have become romanticized in recent years. Just tap on Netflix and watch the rebooted Lost In Space and you’ll see what I mean.

What’s interesting is that we now live in a time where fantasy and reality have started to blur. No longer are robotic companions figments of the imagination. Instead, they apparently are quite real.

Don’t believe me? Then I encourage you to meet Zora, a super cute robot that was recently featured in the NYT (see article). It turns out that in France, Zora is being used as a caregiver for the elderly in a nursing facility.

Yep, that’s right. Older folks (in part) are getting their emotional needs met by an automated machine that speaks, sings, teaches, and can even play games.

But there is more. This knee-high whizzbang also encourages physical activity.

While Zora can’t attend to complex tasks, like administering medications or change bedsheets But the robot does act as a kind of companion for people who might otherwise be alone.

As a counselor, I honestly don’t have a problem with this kind of technology. Well, at least not in its current form. But I am concerned that as robots like Zora advance, necessary human experiences, such as touch and compassion, may be lost.

But here is the thing. According to the NYT piece mentioned above, we may be heading towards a robotic future rather we like it or not.

“In nearly every country, the population of older adults is rising. The number of people over 60 will more than double to 2.1 billion by 2050, according to the United Nations.”

The article points out that given the metrics, there simply won’t be enough healthcare providers to meet the need gap. As a result, society may be forced to turn to robots as a caregiving solution.

So, what would that be like? In roughly thirty years from now, will robots like Zora become super-advanced? Will they be able to wish you a good morning, make you breakfast, and deliver a pain-reliever.

And what happens if you are lonely? Will a Zora-like Robot be able to intuit your sadness and hold out his/her hands for a hug?

This all may sound silly but given the rise of artificial intelligence, plus advancements in robotic medicine, none of this is hard to imagine.

Already we’ve seen the use of robotics in counseling and psychotherapy. Need a romantic partner? Guess what, that is apparently possible too (see post).

But when it comes to having a piece of machinery programmed to take care of you in your old age, perhaps at a time when you are most vulnerable, is this something you would embrace?

There are practical questions of course. For example, can a droid administer your insulin shot? What happens if you refuse to take your medicine – will the robot zap you?

Obviously, I am approaching this topic tongue in cheek. That said, we do live in a time where robotic companions have become a reality.

The only question is how far they will advance and how much society will allow this emerging technology to become substitutes for human interaction.

Would you be OK with a robot taking care of you in your old age? Why or why not? Love to hear your thoughts.