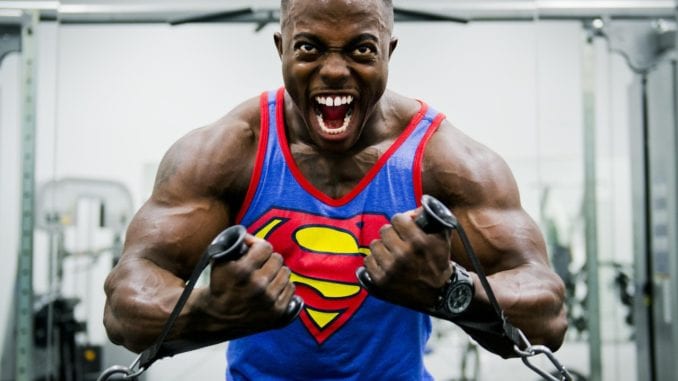 Do you grunt at the gym? If the answer is yes, a new study suggests that could be a good thing.

If you are a bodybuilder or avid gym-goer, you probably hate the guy who grunts like a beast while pumping iron. Not only is it annoying, it’s also distracting – right? At my gym, for example, there’s a sign that tells members straight out: “No loud grunting.”

But maybe it’s time for all of us to rethink our reaction to these guttural sounds. That’s because a new line of research suggests grunting helps athletes to boost power.

I’m not making this up.

Investigators at the University of Hawaii at Manoa asked 22 students with little to no marital arts experience to kick the heck out of a 100-lb boxing back. Eleven were male and eleven were female.

As part of the experiment, some of the participants grunted during the “kick”. Others stayed quiet.

The participants who got all loud and grunted when striking the bag exerted a whopping 9% more power when compared to the others who remained silent. That’s kind of a big deal because as most bodybuilders know, the more power you can generate, the more likely you are to build strength – over the course of time.

Curious about this study and its implications for weightlifters, Guy Counseling spoke to certified personal trainer David Hochbaum. He is a fitness expert in Chicago who works with guys trying to pack on muscle.

“I encourage most of my clients to grunt when they lift [weights] because it helps with getting through a difficult movement. But I also tell them they don’t need to scream when they do it. It’s possible groan and not call attention to yourself,” said Hochbaum. “Maybe it’s a primal response. I have no idea. All I know is that in some situations, it helps,” he adds.

The study, appearing in PLOS ONE, suggests grunting can be seen in two ways.

1. A good thing because it helps the person exert more power or;

2. Not such a great thing because it rattles others, causing them to lose focus.

FYI: On point two, many people believe tennis players who grunt during a match are cheating; meaning they intentionally make these types of sounds because they know it distracts their opponent.

So, is there a middle ground? Hochbaum thinks so.

“Most people at a gym don’t mind some noise. It’s the screamers and yellers who folks despise. Just don’t be super loud. It’s not that hard,” he said.

So, there you have it, folks. Go ahead and get your grunt on while lifting weights. There are very real benefits to be realized. Just don’t be a jackass when you do it.

Posting Gym Selfies May Be Harmful To Your Friends

New study shows impact of exercise posts on social media Do you frequently post workout selfies on Facebook? Do you like flexing your biceps in front of the camera and then sharing the images on […]

Be Antifragile: How to Banter With A Girl and Win

Banter like a man You are out with your pals and suddenly, your group starts to talk with another group, an all-girls group. The numbers are even so you end up mixing as a group […]

How Perceptions of Power In Marriage Are Impacted By Surname Use

Marriage, power perceptions, and surname choices One of the topics that often comes up in premarital counseling is changing last names. Specifically, we’re talking about the long-standing custom of women dropping their maiden name and […]