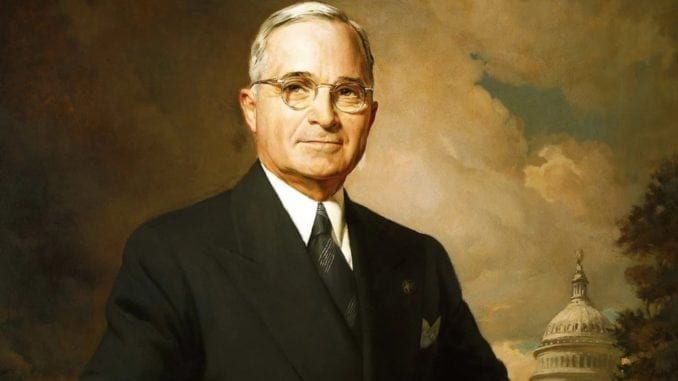 I’ve always been fascinated with Harry S. Truman. Part of this interest stems from his life story. In every way that matters, Truman defied odds by going against the grain and sticking to his convictions.

I’ve studied our nation’s 33rd Commander in Chief Plenty. Time and again, what emerges is a picture of courage, strength, and intelligence.

As a counselor, I often hold out Truman as an example to clients of a leader who possessed a solid core. Not intimidated by others, he was beholden to no one. Moreover, when he made his mind up, there was no stopping him.

And so that is what this post is all about – 15 major accomplishments of Harry S. Truman you might not now. I’ll start off with some basic biographical information and then walk you through the essentials.

Harry S. Truman first stepped foot into the White House as Vice President to Franklin Delano Roosevelt (FDR) in 1945. After just a few weeks as Vice President, Truman would step up as 33rd President of the United States after FDR died of a cerebral hemorrhage.

Having only been in the White House for a brief time, it would be a daunting task that would either prove he was fit for the Presidency or completely not up to the demands.

Many former Presidents went to college right after high school. Many then became statesmen or went on to law school. Harry Truman grew up on a farm in Missouri and spent a full 12 years farming after high school.

He tried law school in nearby Kansas City but never finished, instead, he continued farming and serving part time in the military before deciding to open a slew of unsuccessful businesses, including a men’s clothing store and a sewing supply shop.

To date, he is one of the few Presidents who never finished college.

Elizabeth “Bess” Virginia Wallace had been a childhood friend to Truman. After school she went to a finishing school before returning to their home town of Independence, Missouri.

It would be years until they married when Truman was 35 and Bess was 34.

According to records, Bess didn’t enjoy being First Lady and tried to avoid being at the White House as much as possible.

Although he had considered going to West Point, his less than perfect eyesight would prevent him from getting accepted.

As this was common for all branches of the military, he decided he’d memorize the letters on the eye chart so he could pass the test.

Once passing, he then became a private of the Missouri National Guard, Battery “B” in 1905. Truman would eventually see battle during the First World War.

Truman would end up serving for 37 years, leaving the military as a Colonel for the U.S. Army Officer’s Reserve Corps.

Harry’s father was an active Democrat and he passed this passion on to his son. During high school, Harry worked as a page for the 1900 Democratic National Convention held in Kansas City. Working around and getting to know these fellow Democrats would enable him to later get his first position in politics.

During the two years in between his judgeships he sold automobile club memberships but decided that public service was a better choice for supporting his family.

In 1934, Truman ran for US Senator for Missouri with overwhelming backing from his Jackson County constituents.

He won by over 20 points in what many saw as being a result of the ongoing New Deal that had been implemented to respond to the many problems of the Great Depression.

He would be reelected and would eventually serve as a Senator for 10 years, ending in 1945.

During 1940 Truman toured many military bases and found an abundance of waste and profiteering. This led him to discuss what he saw with the Committee on Military
Affairs which would lead to the creations of The Truman Committee.

The Committee was designed to investigate abuses of federal funds as the country was gearing up for war.

There was much speculation that FDR wouldn’t live out his final run as President. His Vice President at the time was Henry Wallace, and although many people liked Wallace, some felt his views were just too far left and some of FDR’s advisors wanted him replaced. FDR suggested either William O. Douglas, the Supreme Court Justice or Truman. Everyone preferred Truman and his name was added to the ticket.

The ticket of Roosevelt and Truman would win by a whopping 432-99 electoral vote. During January of 1945, Truman was sworn into office as Vice President.

9. 33rd President of the United States

Truman had served as Vice President for only 82 days when FDR died. While the short time in office was bad enough for him to overcome obstacles, during his brief time in the White House FDR had been extremely busy and hadn’t briefed Truman on many important topics that were impacting the United States. He later talked to reporters about it, saying, “…I felt like the moon, the stars, and all the planets had fallen on me.”

Truman hadn’t learned about the Manhattan Project during his short tenure as Vice President but would soon be up to date as he took over the Oval Office. Although the war in Europe had ended for the most part, the US was still fighting with Japan.

Truman wanted to show Japan and the Soviet Union America’s power, which he felt justified dropping the first atomic bombs on Hiroshima and Nagasaki.

Over 200,000 Japanese military and civilians were killed and on September 2, 1945, Japan formally surrendered. This was considered a success as a more traditional fight would have meant US casualties.

Short for Victory in Europe Day, Truman was pleased to announce VE Day on May 8, 1945, marking the formal acceptance of the end of World War II on European soil.

People around the globe celebrated the end of this devastating war.

Over 50 countries met to sign the declaration to charter the UN in San Francisco, California.

Much like FDR’s New Deal, Truman wanted to lay out his own plan for progressing the country.

The Truman Doctrine was designed to counter the expansion of the Soviet Union during the Cold War.

This American foreign policy started on March 12, 1947 and was put in place largely to help Turkey and Greece from Russian guerrillas that were in their countries. The doctrine was also meant to help any country fighting Soviet Communism.

The Korean War started in 1950 when the North Korean People’s Army passed the 38th parallel into what is now South Korea. Over 75,000 soldiers were sent to fight and Truman felt the US and the UN had an obligation to fight off the invaders and help the South Koreans, although they were being backed by the Soviets.

Within one-month, American troops were fighting what was seen as a force of global communism. The war wouldn’t end until 1953 with over 5 million lives lost.

Truman truly understood the war and did just enough to not let the US be seen as wanting to engage either Russia or China, fending off what many thought could turn into World War III.

He served as President of the United States from 1945-1953, at which time he decided not to run again. He returned to Independence, Missouri where he lived out his final days, dying on December 26, 1972 at the age of 88.

In all the ways that matter, Truman was an amazing leader and man. None of his accomplishments would have been possible had it not been for the strength of his convictions.

If you want to learn more about our nation’s 33rd Commander in Chief, I highly recommend a book called: Truman by David McCullough. It’s an excellent read and one that will hold your attention page after page. See Amazon.

I hope you found this page on the accomplishments of Harry S. Truman to be useful. Thanks for stopping by!

10 Tips for Being More Charming, Charismatic, and Likable

Charismatic skill building  Some people are like magnets. The world seems to gravitate toward them, and they hold the attention of others authoritatively and effortlessly. Fortunately, it is not as difficult as it may seem […]