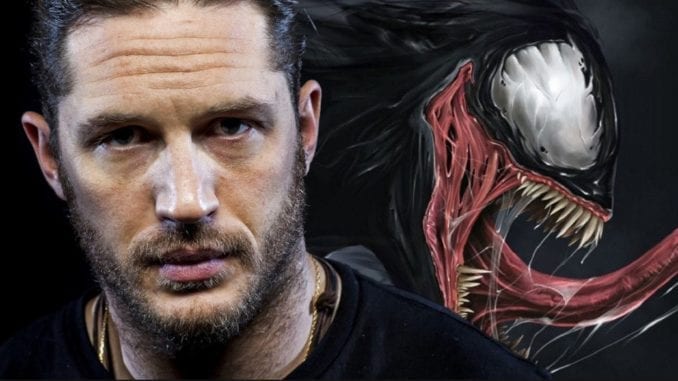 Sony seems to lose focus with their foray into the Marvel Universe with Venom. A stellar cast (Tom Hardy, Michelle Williams) are mismanaged by director Ruben Fleischer and this franchise of unlimited potential opens with less than marvelous returns.

Venom is a hulking, horrifying alien that forms a symbiotic relationship with the downtrodden reporter Eddie Brock in the Spiderman comic books. Eddie Brock hated Spiderman and his hatred fueled him to get in peak physical condition.

The Venom goo came from outer space and originally formed a bond with Spider-man, but that relationship was short-lived.

That’s when Eddie Brock’s adrenaline-pumped body found a new friend in the Venom symbiote. Venom became obsessed with Spiderman and Peter Parker, popping up all over the Spiderman stories to wreak havoc on his life.

That’s the original backstory, but for some reason that storylilne was abandoned for the 2018 Venom movie. It baffles me why Sony would ignore such a hardline connection with a blockbuster icon like Spiderman to make a stand-alone Venom movie.

Changing the origin story and not inviting Spiderman to the party makes the road to glory all that more difficult to obtain.

Synopsis of the Movie

In the Venom movie, Tom Hardy plays Eddie Brock (who is thankfully still a reporter). He’s on an investigative witch hunt after Carlton Drake, played by Riz Ahmed.

Ahmed channels his best Elon Musk impression as he plays the nerd billionaire turned evil scientific genius. Eddie Brock discovers that Drake has been testing an alien symbiotic lifeform on human beings with frightening results. Nobody can survive the bonding process.

Eddie Brock breaks into the laboratory and takes his turn with the black goo, but this time the bonding process sticks. Venom is born, but Carlton Drake wants his science project back.

This leads to all the fighting and chasing that you would come to expect from any superhero action flick.

Now, it’s time to address the elephant in the room (or not in the room in this case). There’s no Spiderman. Venom becomes an anti-hero in this Sony creation. Tom Hardy and the alien symbiote develop a relationship through the intense bonding experience that dominates the dialog and narrative arc of the story.

In an interview with ComicsExplained, Tom Hardy lamented that his favorite parts of the movie were 40 minutes of footage that wound up on the cutting room floor. Those scenes were filled with character improvisations that Tom Hardy apparently really liked. Afterall, the role of Venom is a tricky one because there are two personalities at play – Eddie Brock and the Joker-esque alien symbiote.

Those 40 minutes of character nuance and at least one Spiderman cameo could have worked wonders for this film’s reception among diehard comicbook fans. Tom Hardy is no stranger to comicbook movies. He totally rocked as Bane in the Dark Knight Rises. Check out more about his groundbreaking film roles.

Then, there’s Michelle William’s character, Anne Weying. Anne Weying starts the film as Brock’s fiancé and works as a lawyer. She is the one who gives Eddie Brock his first credible tip about Drake’s shady scientific experiments.

There are some palatable moments between Hardy and Williams, but their relationship seems to breakdown just as the second act of the movie is getting started.

After that, Williams’ talent is suppressed under the weight of the Venom character. Anne Weying is only used as a scream face and a reaction mirror for the audience, a gross mishandling of an Oscar nominee and Golden Globe winner.

Tone of the Film

The tone of the film was largely inconsistent. If you weren’t familiar with the Venom character, you might have expected something reminiscent of the movie Spawn where you have a violent anti-hero and a layer of dark comedy hijinks existing side by side.

That would have been a good move for Sony – to include some humor early on to juxtapose the darkness of the film and perhaps that was the footage that Tom Hardy eluded to in his recent interview.

Keep in mind – the dark DC films (Superman Returns, Batman vs. Superman) were universal flops at the box office. Sony would have been wise to learn from their mistakes and take a page from Disney when it comes to making a light-hearted superhero film that appeals to wide audiences.

There’s nothing timid about a fight to save the universe, but the Avengers movies always have a fair number of laughs built into the fabric of the narrative.

The dramatic moments in the early portion of the Venom film between Hardy and Williams were spot on, but they weren’t sustained throughout the plot. Their relationship wasn’t strong enough to provide a feeling of jeopardy when Williams’ character is threatened later in the movie.

The symbiote was sarcastic and full of wisecracks, but the balance of tone wasn’t well-played.

Despite early rumors of an R rating, Venom carried a PG-13 rating when it debuted. Ruben Fleischer excelled at pushing the boundaries of a PG-13 movie to its limit, and that was a saving grace at the box office, as well. It’s made $32 million dollars domestically since it’s release on October 5th.

The CGI scenes were fantastic, and the fight choreography gave Tom Hardy a chance to showcase his trademark physicality. If you want to learn more about the workout routine that got him ready for this role, then check out this Venom-inspired Tom Hardy workout.

Venom isn’t going anywhere. Even with a less-than remarkable debut to the franchise, the film leaves the door wide open for sequels and spin-offs for Sony.

This was a safe bet for them and there wasn’t much of an attempt to push the envelope of the genre. Tom Hardy and Michelle Williams weren’t seen in their best light, but they provided some of this film’s few remarkable moments.

With an R rating, this film would have done slightly worse at the box office but would have certainly had a more favorable outing with the fans, who were used to seeing Venom as a villain in the Spiderman stories.

A cameo from the web-slinger himself also wouldn’t have hurt the character development of Venom in the slightest bit. Making him a PG-13 anti-hero without Spiderman just didn’t feel right in the end.

Did you see Venom starring Tom Hardy? If so, what were your impressions?

Tom Hardy: A Closer Look at a Gifted Actor

Tom Hardy Facts with background information He’s got one of the most stylish beards in Hollywood and he’s known for tackling physically demanding roles. British-born actor Tom Hardy is not only a style icon, but […]

Tom Hardy – Venom Workout Revealed Tom Hardy is one of the most immersive actors in Hollywood. In fact, he trains like an athlete to fully embody his characters and bring new dimensions to his […]