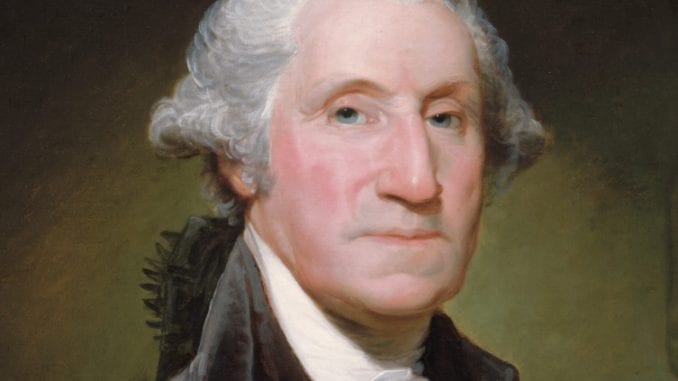 I’ve always been captivated by George Washington. He is credited with wearing many hats, including soldier, farmer, father, and president.

Beyond the legend of the man, which is shrouded in mystique, exists a set of core convictions that helped to create this great country we live in; The United States of America.

I’ve spent hours studying America’s first Commander in Chief. Over and over, what emerges is a picture of unbelievable courage, amazing inner strength, and deep intelligence.

And I’m not the only one who holds Washington in high regard. Public polling regularly shows him among the nation’s best presidents (Mackenzie, 2012).

But much of his popularity can be traced to lore; the result of generational storytelling that touches on specific themes. An example can be found in the tale of a young Washington cutting down his father’s apple tree. He would later confess, thereby establishing the trait of honesty.

But as you will see in the video below, Washington was so much more than the stuff of childhood tales. In every measurable way, he was a man’s man – a guy who could be called a friend, leader, and hero.

Is the adulation for President Washington warranted? Does he deserve to be honored by the masses in such a significant way, similar to how the public views Abraham Lincoln?

I would say yes – big time.

Looking at the historical record in its totality, GW was an active chief executive, using the strength of his personality and powers of persuasion to set in motion so much of American tradition today.

The hard truth is he believed in a strong central government but personally felt above party politics, even though he generally followed Federalist policies.

What follows is a major rundown of 15 major accomplishments of President George Washington you might not know. I’ve tried to infuse biographical data to help spark new insight. My hope is to offer a mosaic of the man that goes beyond the rhetoric.

Keep in mind that when we examine any historical figure, it is important to assess them for the times in which they lived. And I can assure you that America was a much different place in the 1700’s than it is today.

Education: College of William and Mary

From September 5, 1774, through October 26, 1774, the first Continental Congress convened at Carpenter’s Hall in Philadelphia, Pennsylvania. The colonial states were represented by delegates, and George Washington along with six other men were there to represent Virginia.

Many in attendance looked at it as their own version of Parliament.

2. Became Commander in Chief of the Continental Army – June 1775

Having served in the French and Indian War, George Washington had military experience to go along with his political experience.

He was recognized as being a leading authority when it came to the military since few native-born Americans had more experience than he did. He also had business experience having run Mount Vernon, his large plantation.

In essence, he was the total package and came with a commanding demeanor and an ability to instill confidence. Perhaps more than anything, he believed in the American cause with an unmatched fervor.

Many people are familiar with the painting of Washington in a rowboat with his men crossing the Delaware in choppy waters.

This painting represents the crossing of a weary Army in sleet and snow to surprise the Hessian soldiers who had been hired to fight in the war for Britain.

Catching them by surprise, the fight lasted only an hour and a half, with Washington and his men taking many prisoners. Knowing the American people needed this victory emotionally, and feeling confident, he then took his men on to Princeton for another surprise battle, which was also successful.

Many see this as the turning point in the war.

Washington and his men retreated to Valley Forge in December of 1777, just 18 miles from Philadelphia. Although there was no battle fought here, the name Valley Forge is etched in the mind of many as one of the lowest points of the war.

Fighting off disease, hunger, and the elements, although Washington had proven to be a great commander, the low morale was palpable.

The great man himself understood the suffering of his men; men without boots leaving trails of blood behind them, almost naked soldiers with only thin blankets to protect them from the elements, and virtually no food in sight. However, after three months the supplies began to come in and as morale increased so did their resolve and the new American army began to take hold.

Although there were a few deserters, many men believed in Washington enough to stay through the worst of it, emerging as victors in the end.

The battle at Yorktown began on October 14, 1781. George Washington, along with French General de Rochambeau, led their forces in a final attack.

They were able to capture two British defenses which led to the British surrendering just five days later.

Shortly after this battle, the British entered peace negotiations and the Revolutionary War was over, leaving America victorious.

After leading America to a victory during the American Revolution, George Washington’s leadership qualifications were too great to ignore.

To this day, many people refer to George Washington as the Father of Our Country. His prowess on the battlefield translated well into his Presidency and his victory over Britain ushered in 10 years of peace.

Washington set up the first U.S. Cabinet as a group of individuals he trusted to give him advice and interact with his Presidency.

The Executive Branch of the government was created to carry out and enforce federal laws.

George Washington understood the value of a checks and balances system which would prevent any one branch of the government from having too much power.

Related: The accomplishments of Theodore Roosevelt

During Washington’s Presidency, the Naval Act of 1794 was passed.

The U.S. Navy originally constructed six ships, one of which was the USS Constitution, otherwise known as “Old Ironsides.”

Overall there had been peace with Britain after the Revolutionary War, but tensions began to rise between the two countries due to the British exporting many goods to the U.S. but not allowing many American exports and putting high tariffs on those they did allow.

The British also continued to occupy lands they had previously agreed to vacate, and there were ongoing attacks from Native Americans who still supported the British.

Because of these issues, President Washington sent John Jay to get a treaty signed with the British, ensuring peace continued.

Although the treaty didn’t seem to favor America at all, Washington understood that by agreeing to a rather poor treaty for the U.S. it resulted in time to get his troops ready should the States head back into war with Britain.

There was still much resentment of the Native American people towards the white people who had invaded their lands. Although they lent their support to the British, when the Revolutionary War was over there were still pockets of Native Americans who were angry with the settlers.

The Greenville Treaty ended this war by giving the U.S. Government two-thirds of the land the tribes had been living on between the Ohio River and Lake Erie.

In exchange, the Native Americans received animals, clothing, and utensils. Once George Washington signed the treaty, it marked the first time the government had control of all its territories.

There was tension between Spain and the U.S. due to New Orleans being under Spanish control. Spain had closed the Mississippi River to the U.S. in an effort to keep trade to a minimum.

Seeing this as a strategic gain, Washington signed the treaty that resolved the dispute between the countries.

It gave the U.S. the right to sail her ships on the river and it allowed for duty-free transport of those ships.

Although he never lived to see it, George Washington’s face was one of two chosen to grace the first American postage stamps. He was in good company as Benjamin Franklin was the other.

George Washington’s face originally graced the dollar bill starting in 1869. The portrait of him was centered on the front with a vignette to the left of Christopher Columbus.

The modern version we know of today was redesigned in 1963 and has more or less stayed the same.

Washington became a state in 1889 and is the only state named after a President of the United States. The land area was taken from part of the Washington Territory which the U.S. gained in the Oregon Treaty with Britain. It was the forty-second state to join the Union.

15. Appointed to the Grade of General of the Armies of the United States – 1976

One of George Washington’s most notable accomplishments is being appointed as the General of the Armies of the United States.

This six-star grade has only been achieved one other time, although Washington received it posthumously on July 4, 1976, on the 200th anniversary of the birth of the United States.

As you can see from all that has been described here, George Washington was an amazing and accomplished president. Much of what we enjoy today as American citizens simply would not be possible had it not been for the vision and conviction of the man.

If you are interested in learning more about GW, the best place to start is by reading a well-written biography. Personally, I enjoyed Washington: A Life by Ron Chernow (See Amazon).

I hope you found this piece on President George Washington meaningful and informative. Thank you for stopping by.