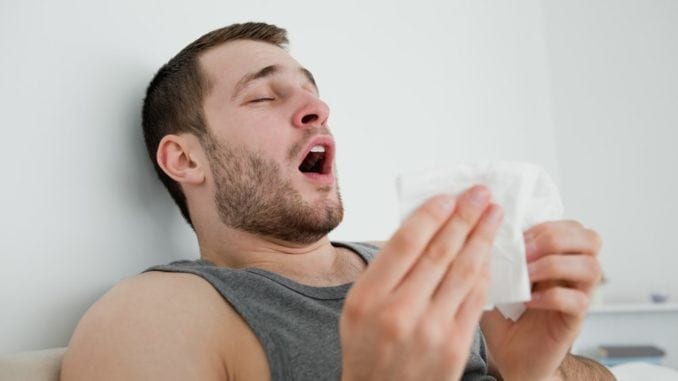 For many years, the idea of a “Man Flu” has been the stuff of urban legend. But what if its existence is true? According to a new line of research, it just might be.

According to a new study appearing in the British Medical Journal, when it comes to respiratory diseases, men are more susceptible to complications than women because their immune systems are weaker.

So, there may be legitimate reasons why men stay quiet, take time off work, curl up under the blankets and chill to ESPN all day.

Dr. Kyle Sue, the principal investigator of the study and a professor of family medicine at Memorial University in St. John’s, says “man flu” is often used to suggest that men may exaggerate their symptoms. “It’s a frequently heard stereotype,” he says.

Well, according to the study, guys sometimes do feel their cold/flu symptoms more than their female counterparts.

Sue, a man who himself has found himself being accused of faking it and “over-reacting,” goes out on a limb for all guys by pointing to research that suggests men might suffer from worse flu symptoms than women.

Mostly, he uncovered studies in mice that revealed females have higher immune responses than males.

Additionally, he cited research in humans that found more men died from influenza than women in the United States. On top of that, he also cited studies showing women are more responsive to flu vaccines.

Even the World Health Organization itself urges the following to the masses: “sex should be considered when evaluating influenza exposure and outcomes,” he writes.

Finally, Sue also talked about a survey conducted by a well-known magazine that found it takes men twice as long to recover from viral respiratory illness, with the authors suggesting that women/caregivers should: “go that extra mile to care for us when we are stricken with it, so that future shelves can be erected, cars can be maintained and football stadia throughout the land can be well attended.”

He shares: “The concept of man flu, as commonly defined, is potentially unjust. Men may not be exaggerating symptoms but have weaker immune responses to viral respiratory viruses, leading to greater morbidity and mortality than seen in women. There are benefits to energy conservation when ill. Lying on the couch, not getting out of bed, or receiving assistance with activities of daily living could also be evolutionarily behaviours that protect against predators. Perhaps now is the time for male friendly spaces, equipped with enormous televisions and reclining chairs, to be set up where men can recover from the debilitating effects of man flu in safety and comfort.”

Peter Barlow, who is associate professor of immunology and infection at Edinburgh Napier University, stresses that there are myriad of factors impacting how a person experiences the flu. Bottom line: It’s difficult to prove if men have it worse or not.

“There are a significant number of factors which can contribute to the severity of an influenza infection,” he said, according to The Guardian. “As the author of the article alludes, it is currently impossible to say whether there are sex-specific differences in susceptibility to influenza virus, or in the progression of the infection.”

So, if you want to believe in man flu, this is your permission slip. Or not.

Men Who Hug and Hold Each other Encourage Healing

Trending News: Men who hug experience emotional benefits As men, our society teaches many of us to “cowboy up” and deal with emotions on our own. But a new group that encourages hugging and cuddling […]