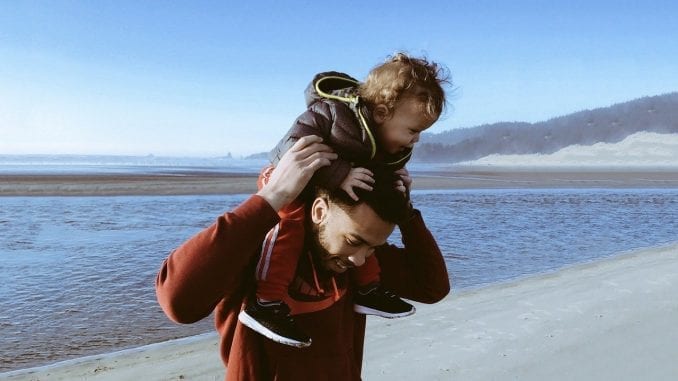 A University of Cambridge study found that children who played with their fathers from an early age were more skilled at regulating their emotions and behaviors later in life.

The University of Cambridge and the LEGO Foundation teamed up together for this study and analyzed close to 40 years of data.

The goal of the research was to determine if there were significant differences between the ways that mothers and fathers play with their children. The results and findings were most likely a surprise to everyone involved.

The findings of the study suggest that fathers engage in more physical activities with their children than mothers.

Consequently, that type of physical interaction could lead to a child’s ability to better regulate their own mood, emotions, and behaviors. These are essential skills for children when they begin to socialize with other children.

Now, what’s the connection between physical games and self-regulation. The researchers involved in the study believe that the correlation deals with learning to hold back your strength, knowing when not to hurt someone, and gauging when someone has reached their limit.

Paul Ramchandani, Professor of Play in Education, Development and Learning at the University of Cambridge, said, “It’s a safe environment in which children can practice how to respond. If they react the wrong way, they might get told off, but it’s not the end of the world — and next time they might remember to behave differently.”

Playtime Ideas from an Expert

For more insight into playtime activities for fathers and their children, Guy Counseling reached out to Sherrie MacLean, who runs an award-winning early learning center in Canada called Tiny Hoppers.

So many fathers struggle with playtime ideas, especially with toddlers and infants. So, we picked Sherrie’s brain for the best ways to connect with our wee ones.

Sherrie MacLean suggested that fathers should “most importantly, play with your child. Get down on their level and play with whatever toy or item they find exciting. It might be a car to drive over their tummy and across your legs, or perhaps it will be a towel that becomes a peekaboo game (children will do this for hours). It is important to get down on their level and play their games. Focus on your child and listen to them.”

Sherrie MacLean went on to say that “During the time you are with your child, make sure technology is minimal; put your phone away and turn off the TV to allow for some quality play time.”

“Go for a walk, play at the park, and really interact with your child. Go to the waterside and feed the ducks or go swimming. All of these things let your child know that they are important to you and are great first steps in creating a well-rounded, socially adjusted, happy child.”

If you’re the active type, then you will certainly find numerous outdoor activities for you and your child. However, that’s not everyone’s cup of tea. You might work 10 hours a day or have mobility challenges.

Related: Are dads spending enough time with their kids?

That’s okay because story time is just as important for a child’s development as active play. A 2018 study conducted by Murdoch’s Children Research Institute found that a child’s language development is fast-tracked by reading with Dad.

Over 400 families participated in the study. When father’s read to their children at age 2 they had significantly greater mastery of linguistic skills by the age of 4.

Critics might argue that there are so many other factors in play here, but the researchers factored in employment levels, income, and co-parenting status.

The results were still highly favorable for fathers. Now, both parents were encouraged by the leaders of the study to read to their children, but fathers were the focus. Never before had a link been so definitively drawn between fathers reading to their infant children and their cognitive development.

So, even if you’re not the active type or you’re crunched for time, you can still benefit your child’s development in a major way. Just by reading them a story before bedtime, you can create a lasting bond that sets them up for success.

Related: 3 steps for being a winning dad

Playing with your children is essential to their cognitive and physical development. You can play outdoors or just spend time reading to them. The studies mentioned in this article highlight the importance of father/child bonding experiences.

There are lots of studies that focus on the bond between a child and their mother, but now researchers are focusing more on the relationship between fathers and their children. Traditional parenting roles are losing their rigidity and fathers are expanding the scope of their interactions with their children.

Dr Ciara Laverty, from the LEGO Foundation, said: “At a policy level, this suggests we need structures that give fathers, as well as mothers, time and space to play with their children during those critical early years. Even today, it’s not unusual for fathers who take their child to a parent-toddler group, for example, to find that they are the only father there. A culture shift is beginning to happen, but it needs to happen more.”

Know someone who acts entitled? An interesting study was recently released in the journal Social Psychological and Personality Science that suggests entitled people are less likely to follow instructions, mostly because they think the instructions […]