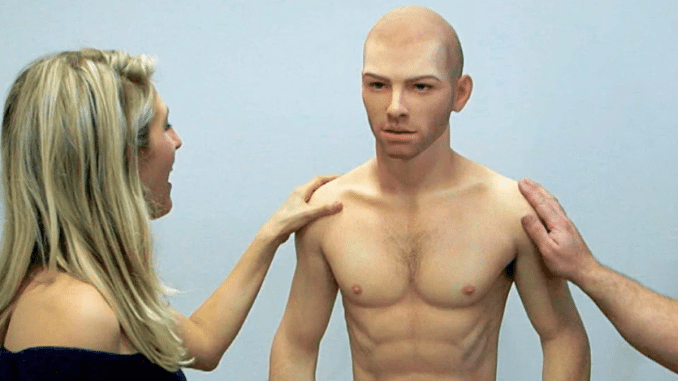 In recent days, there have been a series of news stories that have popped up about advances in technology that will allow consumers the chance to buy realistic male sex robots.

The CEO of Realbotix, the manufacturing company that produced a female sexual companion en masse, recently stated that a brand-new prototype of a male doll is being created; one that promises female consumers something appealing.

Apparently, this new robot will be equipped with many unique features, including a bionic penis that can be ordered in customizable sizes.

Additionally, consumers can even plug the robot into an outlet or simply let him run on batteries. Not yet on the market, it is expected to be rolled out later this year.

Prices may vary but some of these Ken-Dolls may cost north of $15,000 with all the bells and whistles.

From the mental health perspective, one must wonder if electronic companions will be helpful for society or harmful.

Already, we live in a world whereby face to face human interactions are becoming more difficult – thanks to dating and hook up apps that flood the marketplace.

Men, already struggle with meeting women according to research, may find this technology problematic. One of the reasons guys isolate is because they have difficulty sharing emotions.

This is not to say robotic companions are bad.

For some, they may very well serve specific needs. As an example, one can envision a companion being used as a therapeutic surrogate device for females.

But we should be cautious about embracing such technology because there is a chance some people will become dependent on them, thereby limiting real human interaction.

In December of 2017, research was released revealing that a large majority of men are unhappy with being single. One can’t help but wonder if the introduction of male sex robots will make matters worse.

When reporting on these forms of new technologies, reporters need to emphasize the potential pros and cons of such inventions and explore how they may impact people on the psychological level.

As Bloomberg News reported, the robots have the potential of making men obsolete.

About John D. Moore 370 Articles
Dr. John Moore is a licensed counselor and Editor-in-Chief of Guy Counseling. A journalist and blogger, he writes about a variety of topics related to wellness. His interests include technology, outdoor activities, science, and men's health. Check out his show --> The Men's Self Help Podcast
Website LinkedIn