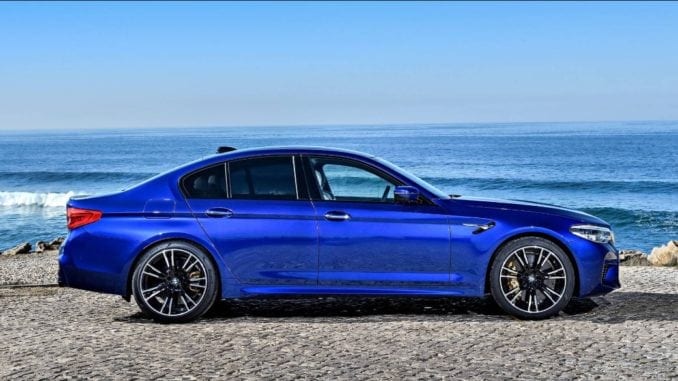 Thinking of a luxury sedan?

Four-door sedans are rapidly losing their market share to sporty new crossover SUVs, but these 5 luxury vehicles didn’t get the memo. This is the new breed. These premium four-door sedans are staying competitive because they’re fast, sophisticated and laced with advanced technology.

Most of the automakers represented in this list also have hot new crossover SUVs on the market, but they’ve gone back to the drawing board on the basic concept of the four-door sedan. What they’ve come up with is sure to get your motor running.

The A8 is the flagship sedan of the Audi brand and has an MSRP of $83,800. That puts it on par with the Mercedes-Benz S Class and the Porsche Panamera.  That’s quite an ambitious leap for the classically-subtle luxury brand. Is the 2019 Audi A8 worth the price?

Well, auto critics and driving enthusiasts are doing double takes at the new Audi A8 sedan because it’s the first production vehicle to have Level 3 autonomous driving technology.

The 2019 Audi A8 can completely drive itself at speeds below 37 MPH and it can park by remote. You also won’t need a key for the 2019 Audi A8. You can enter the vehicle by tapping your smartphone on the door. Then, you place it in the center console to charge the device and start/stop the ignition.

The A8 has enough laser scanners, cameras, and ultrasonic sensors to rival a Navy battleship. The sensor and camera systems give this vehicle’s onboard AI a much more comprehensive view of road conditions than any of its closest competitors.

This is one of the most highly-anticipated vehicles of the past decade. The M5 Competition sedan is now available as a standalone model, not just a package upgrade. The M5 is a powerhouse. It’s capable of traveling from zero to 60 MPH in 3.1 seconds and boasts 617 horsepower.

The 4.4 Liter twin-turbo V8 engine roars to life with a sound that is almost intimidating. This luxury sedan dares you to try and harness all the raw power that’s contained beneath the hood of the M5. There’s so much raw energy on tap that drivers of previous M5s have complained about the lack of control.

This time around, BMW has made some upgrades to the vehicle’s stability and handling. The 2019 M5 Competition sedan has a lower ground clearance, the motor mounts and suspension are stiffer, and the vehicle’s frame is much lighter. The result is a driving experience that is so visceral and thrilling that you’ll barely bat an eye at the $110,000 price tag.

The 2018 Tesla Model S is certainly the celebrity of the bunch. Its all-electric powertrain makes it the quickest vehicle in the list. Without an internal combustion engine, the instant torque of the Model S can zip from zero to 60 MPH in just 2.5 seconds.  When you engage the Ludicrous Mode on the Tesla Model S P100D, you can shave that time down to just 2.27 seconds.

That’s ludicrous alright. The interior comes straight from a minimalist sci-fi novel with a single 17-inch touchscreen display front and center. Tesla would like to boast that this is the safest vehicle on the planet, but it’s high marks in the safety department are being chipped away as the government tightens its security standards on self-driving vehicles.

The 2018 Tesla Model S has some limited autonomous driving functions with 12 ultrasonic sensors, surround view cameras and forward-facing radar. The Tesla Model S with AutoPilot can change lanes, park, manage cruise control and avoid collisions without driver input. The MSRP of $74,500 puts the Model S at the middle of the list, but when you equip all the bells and whistles the price climbs up quickly.

Acura’s flagship sedan, the 2019 RLX Sport Hybrid holds on to some of the old methodology of luxury sedans and attempts to simply excel at the current paradigm. It’s taken the best examples of every vehicle on the market and created something that tops the charts in terms of performance, fuel economy, style and refinement. The RLX Sport Hybrid works on a three motor hybrid system.

It has a 3.5 Liter V6 combustion engine, a front wheel electric motor, and twin rear wheel motors that connect to a lithium ion battery bank. The RLX Sport Hybrid has a combined rating of 377 horsepower, 341 lb. ft. of torque and can be outfitted with all-wheel drive.

It’s quick, nimble and uber-responsive. The individual jewel-eye LED headlamps are unique and brilliant. So is the rest of the redesigned exterior which is much more aggressive and sharper than previous versions of the Acura sedan. When it comes to safety and autonomous driving, the 2019 Acura RLX Sport Hybrid ticks all the right boxes.

It’s got lane departure warnings, adaptive cruise control, blind spot warnings and surround view cameras. There’s nothing ground-breaking about it except the price: just an MSRP of $61,900.

If you’re looking for speed, then ignore the temptation to hop up to the AMG S 65, because the AMG S 63 is faster. Its 4 Liter bi-turbo V8 AMG engine has 603 horsepower and can push this big-bodied sedan from zero to 60 MPH in 3.4 seconds. You might arrive at the finish line just a few tenths of a second behind the competition, but you’ll certainly arrive in style.

Related: How to change your motor oil

The 2018 Mercedes-Benz AMG S 63’s hand-crafted interior is downright palatial. The 12.3 inch instrument cluster sits right next to the 12.3 inch infotainment interface. The entire dashboard sprawls out in a display of woodgrain and tech screens. The AMG S 63 has massaging, heated and ventilated Nappa leather seats.

You can even put aromatherapy in this sedan with fragrance-laced cabin atomizers. Not to be left out of the autonomous driving race, the AMG S 63 sedan has emergency automatic braking, steering assist, surround view cameras, and night view assistance. All other luxury sedans – take note.

Do you own a luxury sedan? If so, which one? Share your comments below.

Into muscle cars? Check out these bad boys! The American muscle car isn’t going anywhere. Although there are more fuel-sipping hybrids and electric cars on the horizon, a few gas-guzzling monsters are still waiting to […]