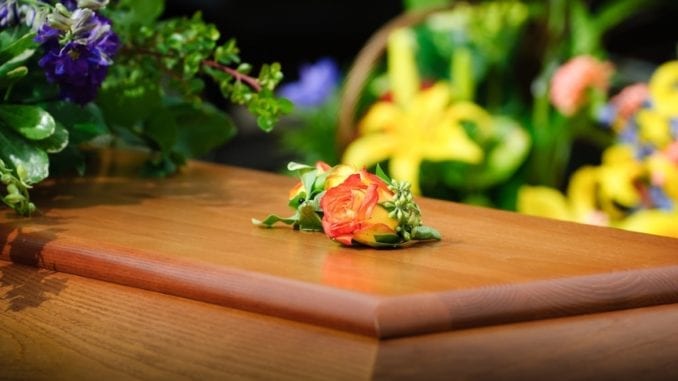 Jeans and funerals – Is It OK?

Are you wondering if it’s OK to wear jeans to a funeral? Curious if showing up in denim might be considered rude? Hoping to find the answers but unsure where to turn?

If the answer is yes, you’ve come to the right place. In the past, I’ve written extensively about men and funeral attire because – as it turns out – a lot of guys have questions about this topic.

The inspiration for this post came to me after recently attending wake services for my sister-in-law’s grandmother. After a long battle with heart disease, complicated by other medical problems, “Grandma Rose” passed away at the age of 90.

While I was standing in line to sign the guestbook, I noticed a family friend from the corner of my eye. His name is Earl; a retired CTA bus driver who relies on a cane to get around. He’s also a widower, his wife passing away five years earlier.

After affixing my name to the book and grabbing a prayer card (a tradition for Catholic services), I made my way over to his location. He was standing in the back of the chapel, completely alone.

We shook hands and exchanged pleasantries. I learned that he’d arrived in a cab minutes earlier and that he needed some help from the driver to get inside. “It sucks getting old son,” he said.

Typically, Earl is all smiles. Even when I’ve bumped into him at other events, including funerals, he’s always been super chipper.

But not on this day. Curious, I asked if everything was OK.

“Yeah, I’m fine. I just feel ashamed of showing up here in jeans. I wanted to wear dress pants, but I’ve gained too much weight,” he said with embarrassment. “But there was no way I was going to could miss saying goodbye to Rose, you know?”

Indeed, he had put on a few pounds over the years. Before his wife’s passing, he was in reasonably good shape. But with problems walking and not having a spouse to help him eat healthier, his size had expanded.

Still, Earl was there – dressed in a white button-down shirt, Wrangler blue jeans and black leather loafers. He looked clean and presentable; his thinning hair neatly combed to the side. I even detected a whiff of dime store Brute as I stood next to him.

Wanting to help, I extended my elbow and then walked him around the room.

To a fault, everyone was genuinely delighted to see him. As he interacted with others and exchanged memories of Rose, I could tell that the shame he felt about wearing jeans was beginning to fade.

When we were done making the rounds, he tugged on my arm and asked that we go up to the casket. “I’d just like to say a quick prayer,” he said.

And so that’s what we did. Slowly, we made our way up to the coffin. Because of worsening back problems, Earl couldn’t kneel. But he was able to make the sign of the cross, close his eyes, and say a Hail Mary.

Related: What are dreams about dead people about?

His mission completed, he asked that I take him to the “break room”; a place most funeral homes have for people to get coffee– away from the heaviness of the chapel.

At the end of the night, he hitched a ride back to his place with a relative. The next morning, Earl returned for the funeral and procession to the graveyard, wearing the same pair of jeans but a different shirt.

All of this happened several weeks ago. Let’s fast forward to the present.

To date, not one person (to my knowledge) has said one word about what Earl wore to that funeral. Instead, what folks did say were things like, “That was so nice he showed up,” and “That meant a lot that Earl came to see Rose.”

Conventional wisdom holds that it is inappropriate to wear denim, of any type, to a departed person’s final services. But is that really true?

Sure, if you can wear something formal(ish), you probably should. But if you can’t get into dress clothes for practical reasons (i.e., don’t have any, can’t afford them), that’s not a permission slip to skip.

When you look around the web, you are going to find all sorts of people acting as self-appointed fashion police, outright telling folks what they must wear to a funeral.

But here is the thing. At the end of the day, nobody ever talks about the “great suit” someone wore to a wake or the “amazing blazer” they had on at graveside services.

Instead, what folks really remember is who showed up.

We’d love to hear your thoughts. Do you think it is OK to wear denim to a funeral? Do individual circumstances matter? Share your thoughts in the comments area below.

What Is a Wake and What Do I Wear?

Going to a wake? Here’s what to expect Recently, a client phoned me to ask: What is a wake? Apparently, he was too embarrassed to query his friends and decided to obtain the answer from […]

Here’s Another Reason To Cut Back on Sugary Drinks

Apparently, sugary drinks can send you to an early grave Do you like dig sugary drinks, like a Coca-Cola or Mountain Dew? How about the ones that get you all jacked up, like Monster Energy? […]