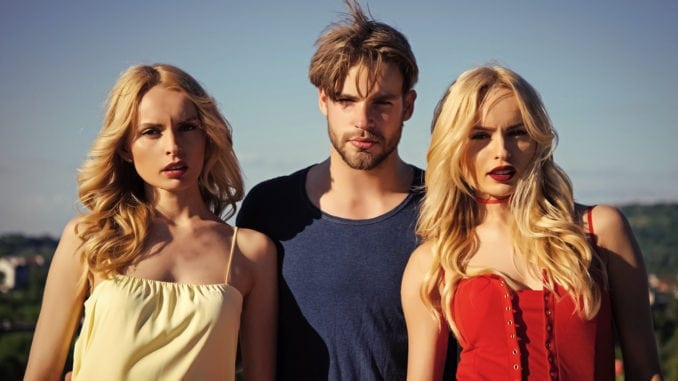 “Is it possible to be in love with two people at once?” That’s a question I often get from men who have found themselves in the confusing situation of having feelings for two people at the same time.

I can tell you with confidence that these types of scenarios are never planned. It’s almost always the case that the man is already in a committed relationship with another and feeling quite satisfied.

But then, someone new comes along, such as a coworker or business acquaintance and bam – an instant attraction develops that is both physical and emotional.

As this new relationship continues, the attraction intensifies. Suddenly, the guy realizes that he’s drawn to this individual in ways that are usually reserved for lovers.

At some point, infidelity can happen. Here, I’m talking about emotional and or physical cheating. Quite often, it’s a combination of both.

In the beginning stages, denial is usually present; a psychological defense mechanism that helps shield people from the difficult truth of a situation.

But at some point, the man looks in the mirror and realizes, that deep inside, he’s in love with two people at once. It is at this point [usually] an existential crisis sets in that is characterized by fantasy-based thinking.

Wrong to Love Two at Once?

If any of what has been described rings true, there’s a good chance you are wondering if loving two people at once is wrong? My honest answer to that is no.

All of us are human and capable of developing feelings for another. Additionally, love isn’t a non-renewable resource that is rationed out like a closely rare commodity.

Instead, it’s an emotion that develops over the course of time and can express itself in many different forms. If you have a chance, I encourage you to read about Lee’s Love Styles to learn more.

What you need to know is that when isolated, love is not something to be ashamed of. In fact, I would argue that the more you try to deny feelings for another, the more powerful it becomes.

It was Carl Jung, the famous Swiss Psychiatrist who is credited with saying, “What we resist persists.” In the case of loving two people at once, his words kind of fit, don’t you think?

But here is the catch so listen up.

There will come a time where a forced choice may be thrust upon you. It could happen in more ways than I can shake a stick at. The most common cause, however, is getting busted.

Which leads us to our next area: What to do?

This is the difficult part and to keep it real, the source of denial I spoke about earlier. Up until this point, your mind has shielded you against the emotional trauma of loss.

But once reality sets in and acceptance of all that is happening becomes obvious, tough questions must be asked that usually have no good answers.

Complicating matters are your feelings. Deep inside, I’m guessing there is a part of you that realizes each person has their own unique qualities you are attracted to.

In this way, they are fulfilling something missing from your life. For example, one may be funny while the other more intellectual.

At the end of the day, a decision really needs to be made. If you are like some men I know, you probably have already whipped out a notepad and pen, drawn a line down the middle, and created a “pros and cons” sheet.

Here is the problem with that approach. It’s logical. But what you are feeling doesn’t operate on the logical plain of existence. Instead, it emanates from The ID; a Freudian term used to describe an aspect of the personality that operates on the pleasure principle.

The hard truth is this. There isn’t a clear-cut answer to the dilemma you are in. Conventional wisdom holds that you should ask yourself how you got into this situation in the first place.

Sure, that may be useful. But how does that help to resolve the crisis you are facing in the here and now? The answer is it doesn’t. Down the road, there will be plenty of time to reflect and conduct a self-inventory.

What I can tell you is that for most guys, they have found real answers by getting off the emotional merry-go-round. In other words, they hit the pause button.

When you decide to do this, you are making the active decision to take a break from both parties. In turn, this allows you time to clear your head and identify your feelings.

The good thing is that taking this approach provides space for healthy decision making. And more than anything else right now, you need to take a step back to figure out your next moves.

As an aside, some guys find it helpful to talk to someone during this period, like a counselor or relationship coach. Other men find solace in being in nature, thereby quieting their minds.

Finally, depending on your situation, you may need to tell both people that you want a break from the relationship. This will no doubt cause difficult questions to be asked.

You’ll have to get honest with yourself and decide how you want to answer them. I won’t lie to you. There may be unpleasant consequences.

Like we talked about earlier, there are no good options here. That’s because love doesn’t work like a light switch that can be flipped on or off at our whim. If only this were true.

One thing is for sure. This can’t go on forever. You have to make a decision. Someone is likely to get hurt. The question at this point is who and how much?

I hope that whatever happens works out for you.

How meditation benefits your marriage Is your marriage feeling a little “blah” these days? Do you have trouble expressing appreciation for your spouse? Do you feel a lack of connection? If so, you’re not alone. […]

Trending News: Study reveals attraction styles If you are like most people, the last person you want to attract to your life is a psychopath. You know what I’m talking about, right? These are folks […]