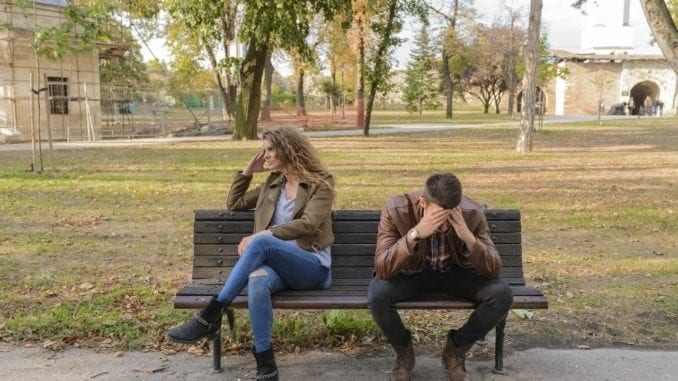 When you’ve cheated on your girlfriend and aren’t sure what to do.

I’ve been dating a girl for the last six months and things have been great. I’m deeply in love with her and think she could very well be “the one”.

That’s why I’m so upset at myself about what happened.

A few weeks ago, I was at an out of town business conference and ended up meeting a woman at the hotel bar. One thing led to another and before I knew it, we were in my room getting it on.

Ever since that happened, I’ve been racked with guilt. Part of me thinks I should confess that I cheated and let fate take its course. But the other part of me is worried that she’ll immediately break up with me.

It sounds like you are really in a bad emotional place. I am sorry to hear that – truly. As I write this response out, I know there will be some who think you are not deserving of sympathy. Please know any ugly comments that may be made are not attributed to me.

That said, it’s important to acknowledge and even validate your pain because, on some level, its existence speaks to the bond you share with your partner.

Now here is the thing – most of the advice available online regarding this topic is really written to grab headlines on sites with a female audience.

Here at Guy Counseling, we try to offer real answers to men about a variety of subjects, including the thorny issue of infidelity.

I can imagine in mind’s eye what happened. You were at the hotel bar, nursing a whiskey with a garnish and trying your best to not stare at the beautiful blond bombshell positioned nearby.

At some point, the two of you made eye-contact; a glance just long enough to indicate both of you were interested. Moments later, you got to talking. The connection was instant and carnal.

Sometime later that night, both of you found your way to your room. She removed her top. You removed your pants. The rest is history.

Does this about right?

Obviously, I’m just drawing a mental picture for the benefit of readers. At any rate, I can tell you with absolute certainty that you aren’t the first guy to find himself in this situation.

If we are to believe the research, something like 35% of men and women have cheated on a business trip. That’s not an excuse for what happened. Instead, it’s simply to point out that things like this go down more often than some might think.

So, the question now is what to do? Should you tell your girlfriend that you cheated on her?

The answer to that question, at least from my perspective, is simply this: It depends.

Here is why I am saying this. You never mentioned in your note if the two of you had an exclusive arrangement. I’m guessing that you do but I’ve learned over the years not to make assumptions.

On the off chance that both of you are still casually dating, it may not be a smart idea to confess – well, at least not yet. Think about it for a quick second. If you do tell her that you stepped out, it will undoubtedly open a Pandora’s box of questions.

I can very easily see a situation where you tell her what happened. In turn, she may respond by saying: “Well, I’ve got something to tell you too.”

And so, I guess what you are hearing me say is that if you aren’t monogamous, be prepared for the possibility that she has also stepped out. Are you ready to hear this news? I ask because now might be an appropriate time to start focusing on what kind of relationship you have. Once defined, however, there’s really no turning back.

Are you completely sure you are ready for this type of commitment? Just food for thought as you contemplate things.

Moving on – let’s assume that the two of you are exclusive or at least have an unspoken arrangement whereby exclusivity is understood. Should you tell her then?

If this describes your situation, I’m going to say yes. This may not be the answer you want to hear. But you came here looking for guidance and so that’s what I’m offering.

Here’s the number one reason you need to be honest about what happened. She’s going to find out anyway. Slap me silly and call me stupid but women have an uncanny way of knowing when a guy cheats. They may not know in real time but eventually, their intuition kicks in and they know.

Trust me when I tell you that you are far better off being the bearer of bad news instead of her figuring it out. I’m not saying things won’t get ugly – they probably will. But at the very least the decibel level will be dialed down a bit if it comes directly from you.

The other reason you need to tell her – and probably the most important – is because she deserves to know. If she’s been faithful to you and has the expectation you will do the same, she has the right to be told the news.

Yes, I realize the aftermath of this disclosure is going to suck hard. And yep, there is a strong possibility that your partner is going to tell you “it’s over”.

Should this be the case, you are going to have to accept this as a consequence. Again, something you may not want to hear. But I’m just being straight with you.

On the flipside, it is also possible that she may have a different reaction. For example, she could say she wants some space; something that could eventually lead to a breakup.

Sure, she could be completely understanding and forgive you. But let’s be real – the chances of that happening are about as good as you hitting all the numbers on the Mega-Millions Lotto.

Assuming that her response is going to be angry and hurt, which is normal (anybody would be) you need to know that she may ask for details. Specifically, I’m talking about a walk-through of everything.

Here’s my strong advice. Stick to the basics. No matter how much she asks you about “What she looked like” and “Was she good in bed”, don’t reveal this information. All it will do is cause her to feel worse and send her on a mental trip of comparisons.

Suffice it to say that simply providing the essentials, like Who, What, When, and Where, are most important. In addition, do yourself a favor. Don’t blame the alcohol. Yes, all of us get beer goggles from time to time but in this case, the worst thing you can do is say: “Hey, baby it was the whiskey!”

Instead, just accept responsibility for what occurred and own it. It’s obvious you feel terrible for what happened. Make sure she knows that you are sorry and aware of your guilt.

As an aside, did you use protection during that hotel rendezvous? If the answer is no or you can’t remember, be ready to test for STI’s. Even if you did put on a rubber, your girlfriend may still ask you to do this anyway. Just do it. Don’t put up a fight.

CG, we could have an entire conversation about why you cheated. Moreover, we could also explore what’s missing from the relationship that caused you to step out.

But you didn’t come here looking for insight into your psyche. Instead, you asked if you should tell your girlfriend you cheated.

The one question I’ll leave you with is this: Was it worth it? If the answer is no, then why did you sabotage what sounds like a good thing?

Should I Take Back My Girlfriend After She Cheated?

Your girlfriend confesses she cheated. What should you do? The dating guru offers answers to tough questions men want to know about love, romance, and relationships.  His Question Hi, Dating Geek, A few months ago, […]

Office affairs can spell trouble Thinking about having an office affair? Are you crushing on a coworker and hoping something happens? Do you get the sense an office-mate wants to hook up? If you are […]