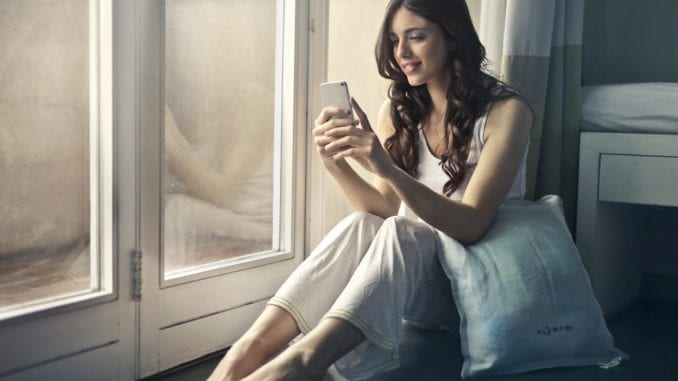 What to do if your girlfriend is obsessed with social media

Let me start out by saying – my girlfriend is great. She’s smoking hot and she’s really down to earth and sweet…when she’s not glued to her damn phone.

She has over 10,000 followers on Instagram and she posts an average of three photos a day. She’s not a celeb or anything, but she spends most of the day looking at her follower and like counts and responding to direct messages and comments.

Sometimes, when we’re together I feel like she’s not even listening to me. That little annoying chirp on her phone is starting to drive me crazy and put a real damper on our relationship. Is there a way I can get her to spend less time on social media and more time with me?

Can you help me?

Let me see if I’ve got the gist of your dilemma. It sounds like your girlfriend’s got a nasty case of FOMO – fear of missing out. She just can’t seem to shake that nagging worry that something important is happening in her digital world, so she’s always checking her phone.

She’s also getting lots of attention from followers and that can be quite intoxicating for her. In fact, each little ping and chirp floods her brain with pleasurable microdoses of dopamine.

A scientific study found that seeing smiling faces on social media, boosting your social reputation and reading positive messages can be just as rewarding as romantic encounters.

Have you read any of her DMs?

Guys can be total pervs on social media, and most girls just ignore the static anyway. So, you probably have nothing to worry about there. You just need her to spend more time with you and make you feel like the star player on the team, not the thousands of followers she has on social media. Am I right?

So, let’s find some solutions. First, let’s try to claw that smartphone out of her clutches. People usually interact with their social media accounts through their smart phone, and that makes it way too easy for your girlfriend to pop in and out all day long to check her status.

You might be able to convince her to go on a slight digital detox. She could ask her to turn off her sound notifications and alerts, so that she isn’t checking her smartphone every five minutes.

Another way to get her back in the game is to put both of your smartphones in another room during your “special” time. That way, nothing can get in the way of you getting more attention. Don’t cuddle in bed…while she scrolls through her social media feed.

That is important time for your bonding. So, no smart phones in bed.

I think you should avoid making too many hard and fast rules about the smartphone though. She’s probably just going to roll her eyes and keep scrolling. You don’t want to alienate her. That’s the exact opposite of what you’re trying to achieve here.

There’s this thing called “nomophobia”. It’s a new word that scientists use to describe the anxiety people feel about NOT having their smartphones. I won’t go into the research data on nomophobia.

Check it out when you get a minute, but basically, you don’t want to cause your girlfriend any unwanted psychological stress by restricting her phone usage.

Instead, you can lead by example. At least, try that first before you break out the rule book. When you go out to eat, make a big show of putting your smart phone away. Don’t keep it on the table and encourage her to do the same.

When it’s time to Netflix and chill, toss your smartphone over the back of the couch in a dramatic display of indifference.

If she’s smart, she’ll pick up on the subtle hints.

I hate to break it to you though – even without her smartphone in hand, your girlfriend might still get that glazed look in her eyes as she ponders what’s going on in her digital life.

This could have catastrophic ramifications for your relationship. If you don’t help her to truly live in the moment, then she might even resent you for taking her attention away from her daily dose of social media endorphins.

I know it can be hard to compete with that level of social interaction, but you need to give her more attention to reduce her FOMO. To do that you gotta cut back on the boring, traditional date nights.

Avoid dates where you just go to a restaurant and sit across from each other and eat or sit idly watching a movie while you stuff your face with popcorn. That’s not gonna cut it anymore.

You need to find some activities that will help your GF stay focused on the moment at hand. I had a friend in a similar situation. His girlfriend was a popular fitness blogger and she was really obsessive about keeping in contact with her followers.

So, my buddy enrolled them both in a painting class. They went twice a week to an art studio in their neighborhood and they both really enjoyed it. You might consider trying something similar with your GF.

Oh, and another important tip is to try not to belittle her social media interactions. Your girlfriend’s digital life is extremely important to her, and you’ll only make the problem worse if you start calling her post-workout photos a waste of time.

Show her that you are MORE important. That’s the key to getting your Insta-girlfriend off her timeline and you getting more facetime in the real world. You won’t get what you want from negativity. You’ll win with spontaneity and increasing the amount of attention you show her.

I hope this helps you create a stronger bond with your girlfriend, and I’d love to hear how things turn out. Give me a shout when you get a chance. Thanks for sending in your question, too. I’m sure lots of guys have this same issue and could use some tips.

Do you think you could use some help in the romance department? Got questions about relationships or dating? Then, email Ask Jack at askus@guycounseling.com