Are you looking for Pisces symbols? Have you always been under the impression that Pisces just has one symbol? You know the one I’m talking about, right? The two fish swirling around one another. While it’s true fish are the primary symbol for this zodiac sign, it’s not the only one.

Believe it or not there are 12 Pisces symbols in total that are linked to this powerful, mysterious and empathic astrology symbol.

You read this right – there are 12 symbols connected to Pisces. Now before continuing, I’m going to be straight up with you about everything that follows. On the web, you are going to read a lot of information about Pisces that has been offered by people who claim to be “psychics” and “readers”.

Sadly, much of what they present is presented with a bunch of flowery language that isn’t based on science or astrology.

Their hope is to get you just interested enough in learning more about Pisces symbols to pick up the phone and call them for a reading. Folks, what you see here is offered for pure enlightenment.

Below you will find a chart of the 12 Pisces Zodiac symbols. Later in this article, a detailed breakdown of each symbol, including characteristics and prominent gender that expresses the associated traits appear.

Just to be clear, I am not astrologer Therefore, you don’t have to worry about a hidden motive on my part. What you see on the Pisces symbols below is based on hard science, coupled with teachings from the ancients.

For as long as I can remember, I’ve been intrigued by zodiac studies. To this day, I’m not sure why this subject area attracts me. I like to think it’s because a good part of astrology is connected to psycho-spirituality; a blending of psychology and spiritualism.

In the final analysis, it doesn’t really matter. Years ago, I accepted the fact that each of us have parts of our personality that we may not fully understand.

In any event, if you have an open mind, this Pisces focused article is for you!

Pisces is considered the 12th House of the Zodiac, which happens to be the same house that all things hidden reside. Each house has its own symbol, giving Pisces 12 – more than any other sign of the Zodiac.

It is estimated that only 5.2% of the world’s population is born under this sign, making Pisces very rare – the rarest in fact on the planet.

What follows is a detailed breakdown of each Pisces symbol, with a bit of information about listed underneath that you may not know about. The material you will read here has been fused with spiritual lessons from the ancients, using Spirit Animal Guides to highlight important characteristics.

At the end of this post, I have published a poll that lets you select which Pisces sign symbol best represents your true personality.

Quick disclosure: I am a water sign just like Pisces, but I was born under the Scorpio Sign. More will be shared about what it means to be a water sign in just a bit. I am disclosing this information with you now because you have a right to know the Zodiac sign of the person authoring this material.

Water signs are among the most mysterious, complex and psychic of the 12 Zodiac signs. There are only three water signs: 1) Pisces, 2) Cancer and 3) Scorpio. Generally speaking, water signs are highly intuitive, very empathic and like it or not, often emotional. While water signs often share similar characteristics, Pisces has its own unique abilities than its Cancer and Scorpio counterparts.

You need to know now that most all individuals born under the Pisces sign are highly empathic. For reasons we do not fully understand, they are able to literally pick up on the emotions of others and do so freakishly.

I am not saying that Pisces are “better” than other signs or more powerful. I am saying this sign has certain gifts that allow Pisces to tap into the emotions and feelings of others. While that may sound wonderful, it can actually be a blessing and a curse. I will speak to more on this in a bit.

Before we take a deep dive into the Pisces symbols, you should know some basic traits and characteristics of this astrological sign. Because we have a lot to cover, I will provide a thumbnail sketch of Pisces that covers the basics.

The Pisces sign is jointly ruled by Jupiter and Neptune. For simplicity sake, Jupiter is the largest planet in our solar system and Neptune the furthest from the sun.

The combination of these two celestial bodies gives Pisces unique powers that manifests in the form of psychic abilities. Both of these planets are considered gas giants, with Neptune representing an end to reality and the start of a new dimension.

Jupiter’s influence represents deep thought and intelligence, firmly grounded in the here and now in the third dimension.

It is the enormously strong gravitational pull from both of these colossal gas giants that gives the Pisces sign its empathic abilities. The constant gravitational battle that Jupiter and Neptune engage in with one another creates a kind of quantum field that transcends time and space.

Those who are born between mid-February to mid-March are caught up in what called a “Piscean Wave” generated by the competing kinetic energies of the two gas giants.

Pisces sign people literally stand in the middle of this wave, surfing a cosmic sea that is bifurcated between the Fourth Dimension (a fantasy world) and the Third Dimension (the here and now). Most all Pisces struggle with maintaining balance, constantly moving in and out of both dimensions.

Pisces signs are blessed with psychic/empathic abilities because of this wave. Much like the Jovian System’s ability to pull in anything that passes through it because of its gravitational pull, Pisces signs are able to absorb the emotions of others.

And Neptune’s positively charged ions launch Pisces into that Fourth dimension we explored earlier – which empowers them to empathically “tune into” what others (including animals) are feeling.

To be a Pisces sign is to be both blessed and cursed. Here are a few of the blessings:

Unlike Cancer and Scorpio, the other two water signs that have defense mechanisms (claws, protective shells, and stinger) Pisces is extremely vulnerable. Their strength comes from their empathic and psychic abilities. As mentioned above, these same abilities are also the signs weakness. 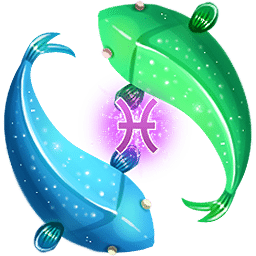 Now that we have covered all of the pre-material, it’s time to review the 12-Pisces sign symbols. More traits are explained under each animal, which really are life animals.

Make sure you read them all so that you can fully absorb their symbolic meaning. If you feel weak in a certain life animal area, you should call upon the spirit animal listed to help educate you on how to enhance your abilities in the respective area.

At the end of this post, please vote in the poll and choose which animal best represents your essence.

Pigs will continue to eat and eat, not realizing they are completely full. Pisces absorbs the emotions of others in much the same way.

Fish represent the primary symbol of Pisces signs. This water animal dives deep, similar to how Pisces can “dive deep” into another’s emotions.

Horses have always held a mythical quality about them. For Pisces, a horse allows the sign to gallop into the fantasy world that is part of the fourth dimension – transforming into a unicorn.

A seal represents Pisces vulnerability. While not defenseless, seals typically need to travel in packs in order to remain safe.

This mythical bird empowers Pisces sexual energy but in a submissive way – soaring every upward to pleasure its mate.

The owl is known for being wise. Pisces signs are wise indeed but struggle to stay focused on the here and now. See owl symbols post to learn more.

For Pisces, mountain goats represent guardianship. These animals guard against harms and should be called upon to help Pisces place emotional boundaries around people.

The mink represents Pisces ability to heal others through empathic medicine. Call upon the mink to help restore and heal yourself first and others second.

Seagulls can fly high above in the sky with the ability to “see” many miles away. Pisces should ride the seagull to help them move away from living too much in the fantasy world.

If you want to invite one of the Pisces sign symbols into your awareness, you will need to be open to the meditative process and dream interpretation. Each of these animals has their own special message to share with you, imparted from a world that is not of this time or space.

One excellent book you might want to pick up is Animal Speak by Ted Andrews. The author does a great job explaining to readers the entire business of animal spirit guides, which are uniquely linked to Pisces sign people.

If you are interested in learning more about the Pisces sign, including the Pisces constellation, a video has been published above.

This Pisces poll is designed to let you choose which animal symbol best represents your true personality. This is not scientific but can help to shine a light on what your other Piscean friends think.

Bear in mind that the myths listed below are just a sampling of the many misnomers that are associated with Pisces.

According to a number of astrological reports, coupled with material shared from the ancients, Pisces signs are most compatible with:

Ideally, Pisces and Scorpio will be in a relationship because the two are highly compatible. The reason relates to both signs ability to perfectly understand one another. Scorpio is a fixed sign, which helps to ground Pisces.

Cancers are the next best match for Pisces because of the emotional bond the two signs share. Because Cancers are a cardinal sign, they have the power to create emotional shifts in Pisces, which rescues them from battles with lifelong depression.

Taurus is the third “best” sign for Pisces. Like Scorpio, Taurus is a fixed sign – meaning grounded in the here and now. Taurus helps Pisces break free of its lazy streak because simply put, Taurus is ridiculously fixated on task completion.

If you are interested in learning more about the Pisces sign, its powers and weaknesses and history steeped in ancient lore, consider picking up a copy of the book: Everything You Need to Know About the Pisces Zodiac Sign.

Inside, you will find page after page of meaning, useful material on the Pisces Zodiac sign – one of the most magical, powerful and least understood signs of the known universe.

10 Ways a Leo Man in Bed Gets Super Turned On

Leo man in bed, revealed by a Leo man Wondering what the Leo man is like in bed? Dating a Leo male and thinking about hooking up? Curious about how to turn him on? If […]

Saturn in Astrology, Mythology and Science

Saturn insights Saturn is the sixth planet from the sun and approximately 886 million miles from earth. In ancient alchemy, it was considered the first rung on the Ladder of the Planets. From the esoteric […]