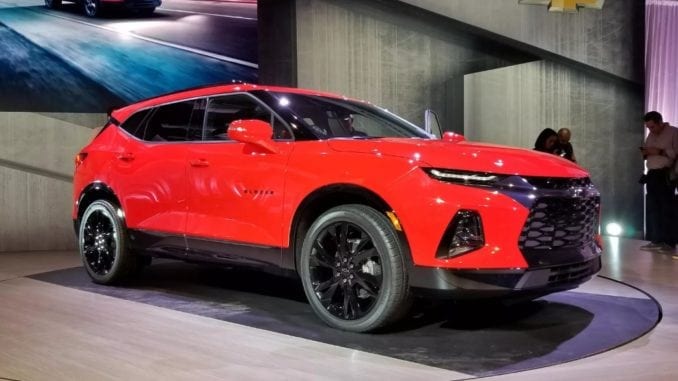 The 2019 Chevrolet (Chevy) Blazer scoots into the lineup somewhere between the Equinox and the Traverse. It’s a mid-sized crossover that leaves behind the bonafide truck amenities of its namesake to delve into the next generation of trendy, style-first utility vehicles.

There are three model trims available: the base model, the sporty RS, and the top-of-the-line Premier. Each model trim has its allure with signature style elements and features both inside and out.

The front grille sure does look tough, but Chevrolet has to get generous with the features to remain competitive in an over-crowded segment that grows larger every year.

At first glance, the new Chevrolet Blazer grabs your attention. “The Blazer has attitude,” said John Cafaro, executive director, Global Chevrolet Design. “It looks commanding on the road, while fulfilling the promise of versatility at the heart of every Chevy crossover and SUV.”

The new design will feature low headlights and an aggressive, dominant front grille on all models. The Premier model trim has additional chrome accents here and there while the RS model trim has sporty, blacked-out features.

More: What makes a car manly?

The side fenders of the body frame fan out at the base and the blacked-out, 21-inch wheels of the RS model are sure to be big hits.

In the rear of the Blazer, there are dual exhaust ports, a high-backed liftgate with a built-in spoiler, and a unique tail light assembly.

Blazer chief engineer, Waqar Hashim, insists that “the Chevrolet Blazer is more than just good looks.” There are two powertrain options available. Base models will come with a 2.5-liter, inline 4 that produces 193 horsepower and 188 pound-feet of torque.

That’s not exactly blowing the doors off the competition. So, it might be advisable to take a closer look at the available 3.6-liter, V6 engine that achieves 305 hp and 269 pound-feet of torque.

Both powertrain options are mated to a 9-speed automatic transmission. Perhaps the most impressive features in the performance department are the twin-clutch all-wheel-drive option and standard Traction Select.

There are two rows of seating for five passengers inside the vehicle. The second row folds down stretch capacity to 64.2 cubic feet of cargo space.

In comparison, the Honda CR-V has 75.8  cubic feet of cargo space with its rear seats folded down. So, the Blazer has to bank on other interior amenities to beat out the competition.

The Blazer does have a sliding back seat that makes it easier to access that space.

More: Learn about the 67 Chevy Camaro!

On the tech side, the 2019 Chevy Blazer does have some points in the win column, most of which are available even on the base model.

The much-sought-after Apple CarPlay and Android Auto compatibility functions are standard, and so is a generous 8-inch touchscreen display.

You also get a one-month 4G/LTE WiFi subscription. Hitch Guidance and Hitch View employ the onboard cameras to make trailering much more manageable for novices. Don’t count on seeing those features on the base model, however; you at least need to upgrade to the V6 model to incorporate those.

Other standout tech features include an electronically locking glove box, wireless device charging, and up to six USB ports.

Automakers at Chevrolet are still tight-lipped about which models will get which safety features. Adaptive cruise control and a rear-camera mirror are reserved for the Premier and RS model trims.

Safety features such as forward-collision warning and automatic emergency braking are ominously missing from the automaker’s official press kit.

It’s also somewhat early to determine the vehicle’s crash and safety ratings from the IIHS and NHTSA.

If first impressions were all that mattered, then the 2019 Chevrolet Blazer would win every time. Its distinctive exterior style and iconic name are sure to gobble up attention.

It does have all-wheel-drive capabilities and some serious towing capacity that puts it smack dab in the center of a highly competitive vehicle segment.

However, the interior underwhelms on the base model, which doesn’t have the cargo capacity of a mid-sized crossover from Honda or offer unique amenities that you can’t find anywhere else.

Technology and infotainment are fair, but the verdict is still out on the available safety features.

If Chevrolet can manage to offer automatic braking or forward-collision alerts as standard equipment, then the Blazer will genuinely be more than just a one trick pony.

Introduction to Small SUVs Small SUVs, sometimes called compact crossovers, are the trendiest vehicles on the market. They have funky, unique style elements but sometimes fall short on functionality. Not many small SUVs can deliver […]

What’s new with the 2019 Toyota C-HR? Subcompact crossovers are one of the fastest-growing vehicle categories on the market. All the automakers are pushing out new vehicles with over-the-top style elements to grab your attention. […]