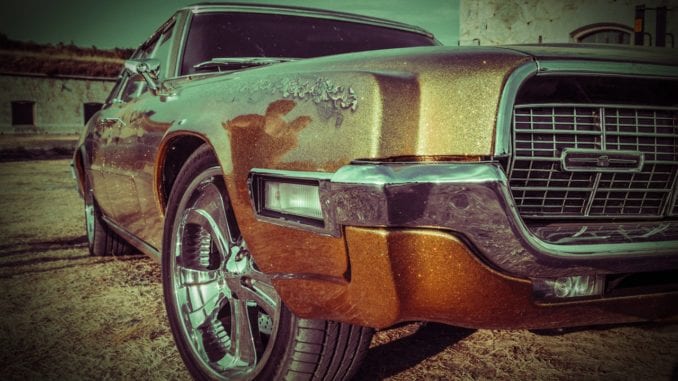 Consumer psychology has always fascinated me, particularly the buying habits of men. That’s why a recent conversation I had with a buddy about manly cars was so entertaining.

My friend Keith, an early 40’s married aircraft mechanic recently purchased a vintage 1968 Ford Thunderbird. If you are of a certain age, you may remember this vehicle. Some may disagree but I would categorize this baby in the muscle car family.

When he offered to let me take it for a spin, I’ll admit I was super impressed. With a V-8 engine and 315 horsepower, the car was very fast.

Moreover, you could actually “feel” the weight of this vehicle; unlike so many cars today that leave you woefully disconnected from the machine.

What made you buy it?

His answer was very simple. He told me that he wanted something manly. “I like cars that vibe out man bro – the more rugged the better,” he said.

It took me a few moments to absorb what he had shared. In many ways, Keith is the quintessential rugged type: jeans, flannels, boots, and a beard are his normal look.

Curious, I wanted to know why he didn’t get something like a Camaro or a pickup truck. They are also considered masculine, right? Plus, you can haul a lot of things around in them, in addition to family members (Keith has two 10-year old girls plus his wife).

The funny thing is when I asked my question, he didn’t have an answer. “I don’t know. I guess I just liked the car,” he said with a chuckle.

What Keith didn’t know that I did was that many guys who fall between the ages of 40-60 often experience a mid-life crisis. You’ve probably heard of this, right?

That’s when a man sometimes feels trapped by his life circumstances and is looking for change; a reconnection to his youth.

More: Learn about the 67 Chevy Camaro

For some guys, it might mean getting a tattoo. Others join the gym. And in rare cases, some dudes will cheat on their spouses as a way of proving to themselves they are still attractive.

In Keith’s case, I already knew that he struggled with having a sense of identity. In the months leading up to the car’s purchase, he had been complaining that he never had time for himself.

This made sense because it’s a natural byproduct of family life. But his self-observation also helped to contextualize what that Thunderbird was all about:

The car lets him get in touch with his inner man.

Conventional wisdom holds that masculine cars are all about size. For example, the GMC Sierra ranks as one of the most popular vehicle types among men, according to Ranker.

But does size really equal masculine or is there something more? My own thought is that it’s not so much about what the car looks like but instead, what a guy can do with it.

For Keith, his ’68 Thunderbird gave him a project. The Ford allows him to spend time in his garage fixing her up. And let’s face it – most guys need a hobby – in many cases manly hobbies where they can use their hands.

That may sound like a hypermasculine statement. It’s not meant to be (honest). Instead, I’m simply suggesting that sometimes for a dude to be a dude, he needs to channel all of that testosterone flowing through his system somewhere. Contrary to popular belief, it’s not all about sexual conquests either.

So, at the end of the day – what really makes a car manly? The answer largely depends on the guy driving it. In many ways, the vehicle itself is an extension of his persona – and a channel from which to broadcast who he wants to be.

I really like Keith’s ’68 Thunderbird. It’s obvious to me that he gets a big kick out of owning and driving it. The hours he spends fixing her up is likely worth its weight in gold on the mental health front. That said, he’s probably paying a fortune to replace parts!

But if it helps him to feel more in touch with himself, who can say that’s a bad thing? Oh, here’s the best part. He has marked his territory with this vehicle and won’t let his wife drive it.

Yep, I’m aware of this because she whispered it in my ear: “I don’t want to get behind the wheel of that monster!” she said as we exchanged a laugh.

His little girls are a different story. They are already talking about taking over the Thunderbird when they get their drivers licenses. I have a feeling by the time that happens, Keith will have moved on to a different ride.

What’s your definition of a manly car? Feel free to share in the comments section.

Tips for working through driving fears Fear of driving is one of the most common fears people face.  You may feel anxious about getting behind the wheel, or worry that an accident may happen while […]

Pick-up truck review of two amazing vehicles Ready for a new pick-up truck? Well, the Ford F Series is the best-selling vehicle in America, beating out all other trucks, crossovers and sedans. In fact, Ford […]

Learn about the 2019 Honda Fit – Real Review The Honda Fit debuted on the U.S. market in 2007 and was well-received for being affordable and funky. It has fold-down seating for added cargo space […]