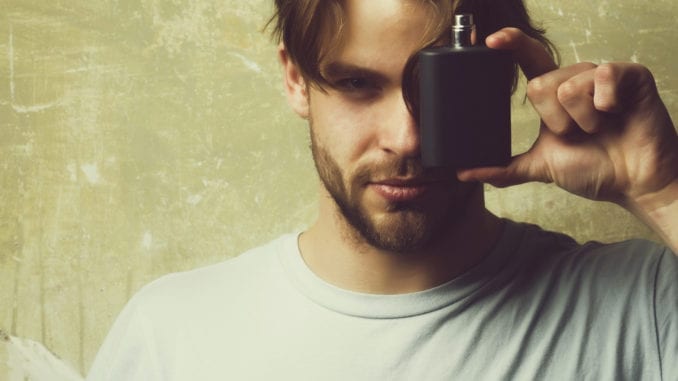 When you are thinking of spraying on cologne before intimacy

I’ve got a question that might strike you as odd. Do you think it is OK to put on cologne before sex? It’s not that I smell or have bad BO. I’m just wondering if it might help turn on my girlfriend more?

What do you think?

First, I’ll start out by saying thanks for this question. What you have asked isn’t all that unusual, let alone odd. When you think about it, there is an entire industry geared towards men and body scent. In fact, it’s a multi-billion dollar endeavor.

Have you ever thumbed through a men’s magazine and saw a cologne advertisement? If so, there is a good chance you spotted a dapper dude next to a fragrance bottle. Somewhere in the picture, you probably also saw a beautiful girl nearby.

The hard truth is the promise of sex is often used as a convincer to encourage guys into making a cologne purchase. And it’s not just colognes. Aftershaves, body sprays, and deodorants also do the same thing. Can you say Old Spice?

With all of that said, let’s move on to the heart of your question. Should I put on cologne before sex?

I’ll level with you – the answer is more complicated than you think. That’s because not everyone likes artificial odors. Moreover, some fragrances can interfere with your own body scent, which is broadcast through pheromones.

In your note, you mentioned that you were thinking of putting some on to help encourage your girlfriend’s libido. There’s nothing wrong with this however, I’ve got to ask if you think it will really help?

I’m not saying this to be rude – I promise. Instead, it’s all about trying to understand where you are coming from. The message you wrote said, “I’m just wondering if it might help turn on my girlfriend more?

While I can’t be sure, it sounds like she already likes you and that intimacy (in the biblical sense) is already taking place.

Yes, I am taking a bit of license here and making assumptions. If I’m wrong, let me apologize right now. But if I am right, I’m here to tell you that cologne alone isn’t going to create the proverbial fireworks.

Instead, the carnal reaction you desire is a function of attraction. This is informed by a number of things, including what your girlfriend likes in a guy, mutual chemistry, and confidence.

And I’m here to tell you that confidence is much more seductive than any scent you might vibe out.

So, I’ll come right out and ask you: Do you feel confident in the bedroom? If you don’t, is your girlfriend picking up on this? Women tend to be super intuitive. If they sense that you aren’t sure of yourself, it’s going to become known in one way or another.

SC, I could have answered this question with the typical response so many blogs offer, such as “don’t put on too much” or “go for a woody scent”. But my sense is that something deeper is happening with you that relates to sexual intensity and attraction.

If my hunch is right, it might be more helpful to flip open a book on confidence-building instead of reaching for Gucci. A good one to consider is The Dating Playbook for Men.

I recognize that I may not have directly answered your question. That said, I’m hoping my response has given you new insight. Thanks for stopping by.

“I’m always the one having to initiate” Are you in a relationship with a partner who never initiates sex? Does the situation bother you, causing you to question if they truly want you? Tired of […]