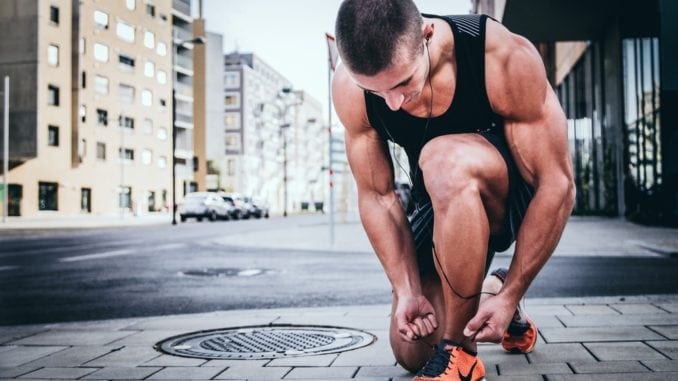 One of the most common reasons men seek out therapy is to gain help with self-esteem. As a counselor, I can tell you it’s an issue that pops up frequently during sessions.

You may be wondering why? It’s simple.

Guys would rather talk about anything other than how they feel. It’s not that they don’t want to – they do. But our society is such that guys are taught “real men” don’t talk about self-worth.

Chalk it up to toxic masculinity or false constructs about what it means to be manly. The result is still the same. A culture in which guys keep quiet about how they view themselves.

That’s a shame when you think about it. Research tells us that something like 10% of guys in the United States struggles with depression.

And if I were a betting at a poker table in Vegas, I’d wager those numbers are much higher.

Before we get ahead of ourselves, it may be helpful to have a basic definition of self-esteem (through the lens of men).

At its core, self-esteem is an emotional evaluation of a person’s self-worth. It’s how a guy views himself in comparison to others.

This evaluation usually occurs by comparing oneself to others, including peers, family members, and friends.

Many pages on the Internet talk about how men can increase self-esteem. That’s cool. Goodness knows we need more of these resources.

But here’s the thing.

Few articles appear online that directly speak to the specific behaviors guys engage in that destroy it. In fact, that’s what inspired me to pen this piece.

What follows are 10 things guys do that chip away at self-worth. Some of these may some obvious. Others may cause you to pause and think.

I encourage you to read them all in context with your own life.

Right out of the gate, I’m mentioning this one because it’s a major annihilator of self-esteem.

Whenever you program your mind into believing that men “must” behave a certain way, you literally place a chokehold on your self-worth.

2. Relying on alcohol has a social lubricant

I’m not knocking alcohol. Tying a few on occasionally can be fun. The problem occurs when men rely on alcohol to socialize with others.

The insidious part of this activity is how alcohol can transform into addiction. When this happens, a whole new set of problems comes to arise.

That’s when alcohol use becomes abuse. Here’s some examples:

I mentioned this earlier but it’s worth reinforcing here. Guys are notorious for clamming up when it comes to how they feel. While there are generational differences, as a tribe we’re pretty bad in this area.

And things can go from bad to worse when we surround ourselves with others who do the same thing.

Here, I’m talking about buddies who are incapable of having conversations about anything real.

One of the first things I encourage men to do when examining their self-worth is to assess their mental tape. You may be wondering what means?

Simply put, a mental tape is an internal message you play repeatedly in your mind. Sometimes, the tape is healthy. Other times, it’s toxic.

When the tape is ugly, thoughts act like battery acid, quickly eroding your self-concept down to nothing. In turn, this can contribute to depression and loneliness.

One of the best-kept secrets among men is closely held body image issues. I’ll give it to the ladies – at least this is a topic they talk about in open forums.

That’s because many of us believe that if we talk about displeasure with our personal appearance, we somehow aren’t men. It’s a crock of BS but that’s our reality.

Mental health stigmas have been around for as long as I can shake a stick at. But for some reason, they seem really bad when it comes to men.

Some of this likely has to do with toxic masculinity as mentioned earlier. How many guys do I know who think, “Real men don’t get depressed!”

Regardless, there are a lot of men who struggle with mental health issues. And when they aren’t addressed, they have a way of taking a toll on self-esteem.

This one may take time for you to absorb but I think it will make sense after giving it thought.

Learned helplessness is a ten-dollar term used to describe a dynamic where a person becomes a prisoner of the past. In turn, this acts as a permission slip to remain miserable.

When you buy into learned helplessness, you fall into the trap of inaction, thereby remaining stuck in misery.

A major reason men worsen feelings of self-worth is by isolating. Here, I’m talking about avoiding others because you don’t want people to see how crappy you feel.

Paradoxically, isolating has a way of perpetuating. In turn, this can cause a man to become a recluse and cut himself off from important life relationships.

Moreover, ongoing isolation can lead to (or worsen) depression. When you throw in point number 4 from above, it doesn’t take long to see how self-esteem ends up in the toilette.

Let me come right and say I don’t have an issue with marijuana. If I had a magic wand, I’d legalize the $hit everywhere because too many men are sitting in jail for past recreational use.

That said, there is a difference between use and abuse.

Abuse happens when you rely on marijuana to get through the day. Addiction occurs when you can’t function without taking a toke. And here’s what I know that a lot of guys won’t say in public.

Pot (when abused) can cause fear, uncertainty, and doubt. Some folks refer to this as paranoia. In the final analysis, it doesn’t really matter.

But here’s what does.

If you are abusing 420 to interact or escape from serious mental pain, you are killing your self-esteem.

If you struggle with your self-worth, it’s easy to blame others for the crappy things that have happened in your life.

But here’s the real deal – blaming will only get you so far.

One of the core tenants of Acceptance and Commitment Therapy (a form of CBT) is that we can integrate aspects of our past into the here and now without getting caught up in the blame game.

I’m not saying you shouldn’t be pissed at whoever hurt you. And please don’t confuse what I am saying with reaching for the forgiveness card.

Instead, what I’m suggesting is that you accept really bad things that happened in your life while taking responsibility for the decisions you make in the here and now.

Hey, I admit it. This isn’t easy and may require that you engage in various forms of mindful living.

But if you keep playing the blame game, you’ll remain stuck in a negative morass.

Your self-concept represents your innermost perceptions about how you view yourself. What you feel inside has a way of projecting outward through what you think, do, and say.

If you are engaging in any of the behaviors described above, it’s likely damaging your ego; the middleman who lives in your heart and mirrors out what’s locked inside.

To my mind, guys who address these issues and are manliest on the planet.

What It’s Like Exercising Your Abdominals In A Public Park

I decided to move through my fears and just do it Last week, I walked by a public park near my house and saw a group of people exercising. One guy was doing chin-ups. Another […]

How To Quickly Get Out of a Funk!

Get Out of a Funk Hello and welcome – or welcome back – to this – the thirty-fifth episode, of the Men’s Self-Help Podcast. I’m your host, Dr. John Moore and I’m a licensed mental […]

Paying the Ultimate Price for the Perfect Selfie

Selfie Risks A 43-year-old man paid the ultimate price this week to take a selfie in Oregon. He fell over 100 feet into the ocean after a tree limb snapped underneath his weight. He was […]