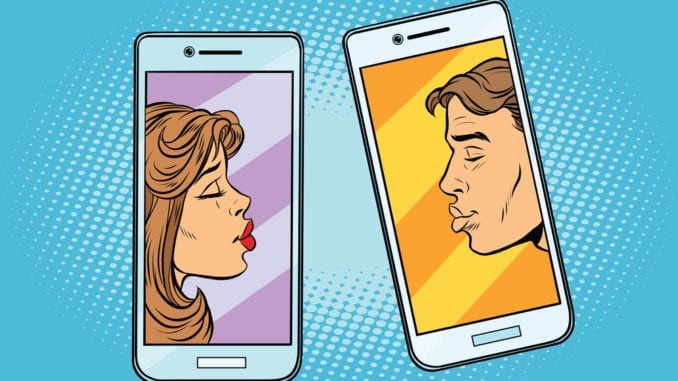 Are you in a mutually exclusive relationship? Do you ever wonder if the person you are with is still using the dating apps, “looking” around for someone new? Have you chalked your suspicions up to silly paranoia?

Well, a recent study published in Computers and Human Behavior suggests your concerns aren’t as crazy as you might think. That’s because the results revealed 18-25% of users who are on Tinder and similar apps also happen to be in committed relationships.

That’s a lot of people, don’t you think?

Investigators surveyed 1,486 Tinder users about their motives for using the app, along with their experiences. More than 300 participants (22.4%) admitted to tapping on Tinder, even though they were in an exclusive relationship.

Related: Should I take back my cheating girlfriend?

A little more than half of the participants who were in exclusive relationships revealed going on Tinder with the goal of meeting someone new.

So, were the non-single Tinder users swiping to jack up their egos or were they getting something more? According to the results of the study, here is the breakdown:

Guy Counseling was curious about the findings of this study and spoke to Frank Moore, a licensed psychotherapist in Chicago who works with individuals and couples.

“Dating has become so much like shopping, similar Amazon, that people have become conditioned to continually look for attention, and affection – electronically. It’s also somewhat addictive because so many of these dating apps act as tools for instant validation.”

Related: Can you love two at once?

Obviously, there are limitations to the study. These include not knowing how long participants were in their respective exclusive relationships and inherent problems that go along with defining infidelity.

Still, the study does help to shed light on the behaviors of some dating app users.

The research, “Why are you cheating on tinder? Exploring users’ motives and (dark) personality traits“, was led by Elisabeth Timmermans with Elien De Caluwé, and Cassandra Alexopoulos as coauthors.

Are you in a committed relationship and on a dating app? What’s your motivation?

5 Tips For Getting a Girl Interested In You That Work!

Want to get a girl interested in You? Use these tips “Nobody talks to girls in real life anymore,” said a friend of mine recently. “It’s all just likes and stuff online.” That statement is […]

Men, Dating, and Confidence Hello – and welcome episode 19 of The Men’s Self-Help Podcast. I’m your host, Dr. John Moore. I’m a licensed mental health counselor out of Chicago, Illinois – and I’ve been […]